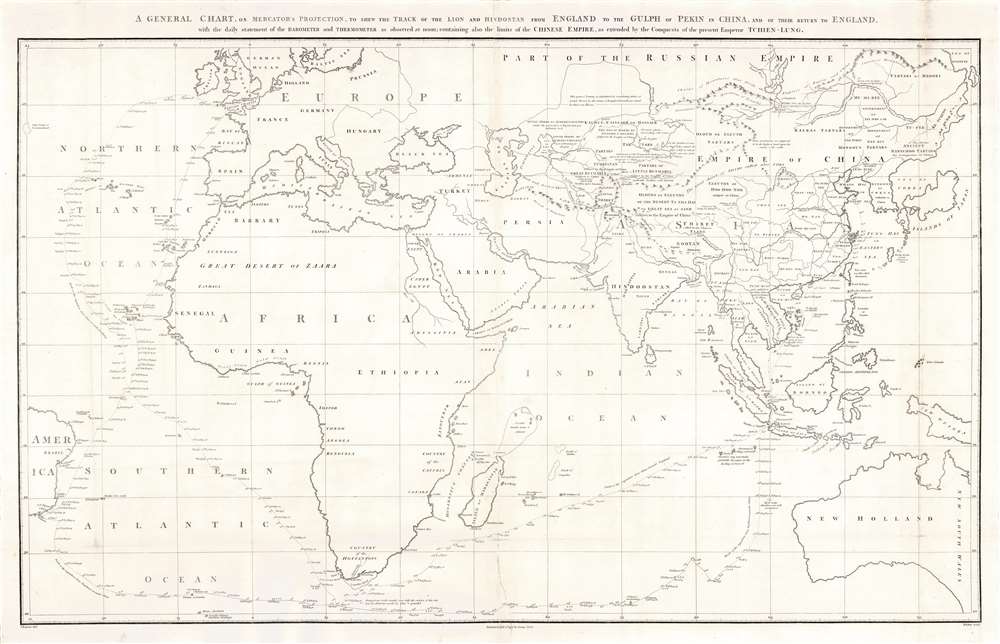 This large 1796 John Barrow nautical map of the Atlantic and Indian Oceans was produced to accompany George Leonard Staunton's account of the first British diplomatic embassy to China, led by George Macartney on behalf of George III. It was drawn by John Barrow, who had served as the official interpreter to Lord Macartney's mission. The chart records the track of the squadron carrying the embassy from London to Beijing, from October 1792 to September 1794. It includes readings of atmospheric pressure and temperature recorded daily at noon during the voyage. The map supplies updated information of the political and cultural divisions in China and in the neighboring regions of Asia - many areas of which would still not be mapped in detail well into the 19th century. In some cases, the new Chinese terminology used for an area is shown to replace names drawn from Ptolemy, eg. 'Tartars of Little Bucharia: subject to the Empire of China, anciently Scythia extra imaum.'

The sea between Japan and Korea, whose name, either the 'Sea of Korea,' 'East Sea,' or the 'Sea of Japan,' is here identified in favor of Korea (Sea of Corea). Historically, Korea has used the term 'East Sea' since 59 B.C., and many books published before the Japanese annexed Korea make references to the 'East Sea' or 'Sea of Korea.' Over the centuries, neighboring and western countries have identified Korea's East Sea using various different terms. The St. Petersburg Academy of Sciences referred to the East Sea as 'Koreiskoe Mope' or 'Sea of Korea' in their 1745 map of Asia. Other seventeenth and 18th century Russian maps alternate between 'Sea of Korea' and 'Eastern Ocean.' The 18th century Russian and French explorers Adam Johan von Krusenstern and La Perouse called it the 'Sea of Japan,' a term that became popular worldwide. Nonetheless, the last official map published by the Russians name the East Sea the 'Sea of Korea.' The name is currently still a matter of historical and political dispute between the countries.

Macartney had been tasked with convincing the Chinese Emperor Qianlong to ease restrictions on trade between Great Britain and China and to allow the British to have a permanent embassy in the country. The embassy was successful in none of these things. While much has been made of Macartney's refusal to kowtow to the Emperor, however, the failure of the mission might equally be laid to the Chinese Emperor's insistence - in a subsequent letter to King George III - in referring to all Europeans as 'barbarians', all nations of the earth as being subordinate to China, and addressing the king himself as a Chinese subject, abjuring him to 'Tremblingly obey and show no negligence!'

The map was printed in 1796 to accompany Staunton's 1797 An authentic account of an embassy from the king of Great Britain to the emperor of China. The Account appears four institutional collections listed in OCLC. The separate map is only catalogued at the Caird Library of the National Maritime Museum.

John Barrow (June 19, 1764 – November 23, 1848) was an English statesman, cartographer, and writer active in the late 18th and early 19th centuries. Barrow was born in the village of Dragley Beck, in Ulverston, Cumbria. His first recorded work was as a superintending clerk at a Liverpool iron foundry, but by his early 20s, transitioned to teaching mathematics at a private school in Greenwich. One of his pupils, the young son of Sir George Leonard Staunton, favored him and he was introduced to Lord George Macarteny. Barrow accompanied Macartney as a comptroller of household, on his 1792-1794, embassy to China. Having acquitted himself well, Barrow was hired by Macartney as private secretary on a political mission to the newly acquired Cape Colony, South Africa. Barrow was given the difficult task of reconciling Boer settlers with the indigenous African population. In the course of this voyage he traveled throughout the Cape Colony, coming to know that country well. There he married botanical artist Anna Maria Truter, and, in 1800, acquired a home with the intention of settling in Cape Town. Following the 1802 Peace of Amiens, the British surrendered the colony and Barrow returned to England where he was appointed Second Secretary to the Admiralty, a post he held with honor for the subsequent 40 years. In his position at the Admiralty Barrow promoted various voyages of discovery, including those of John Ross, William Edward Parry, James Clark Ross, and John Franklin. The Barrow Strait in the Canadian Arctic as well as Point Barrow and the city of Barrow in Alaska are named after him. He is reputed to have been the initial proposer of St Helena as the new place of exile for Napoleon Bonaparte following the Battle of Waterloo in 1815. He was a member of the Royal Society and the Raleigh Club, a forerunner of the Royal Geographical Society. In 1835 Sir Robert Peel conferred upon him a baronetcy.

Staunton, George Leonard An authentic account of an embassy from the king of Great Britain to the emperor of China, including cursory observations made, and information obtained, in travelling through that ancient empire and a small part of Chinese Tartary. (London, G. Nicol) 1797