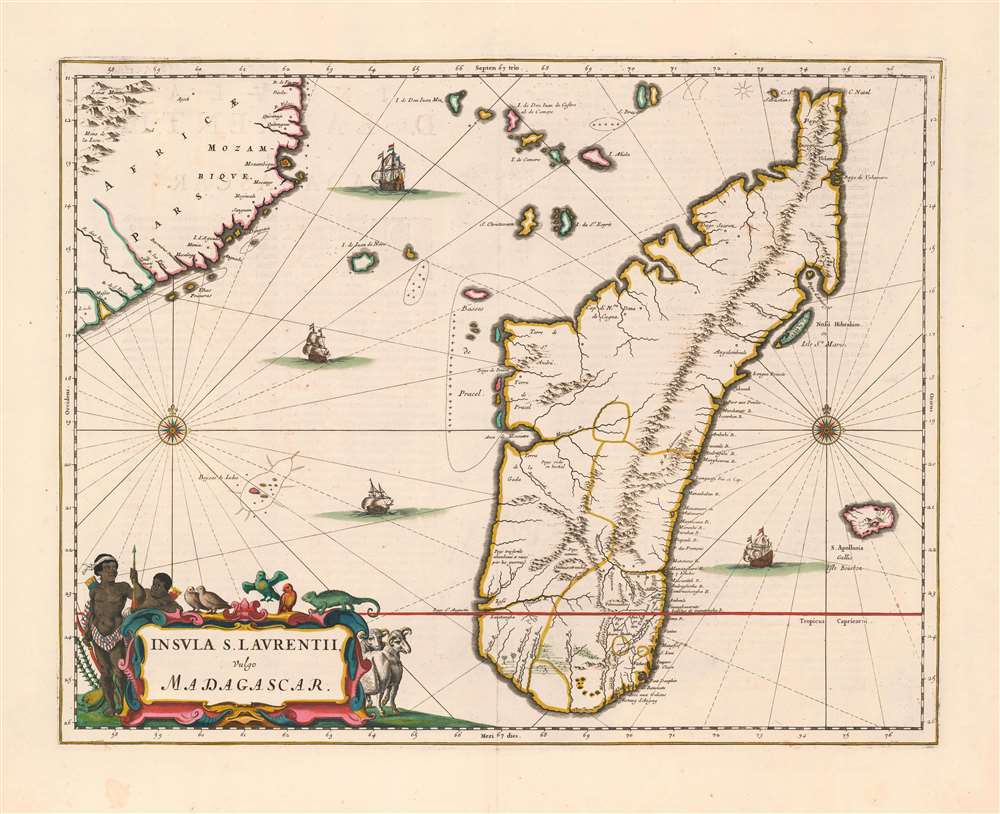 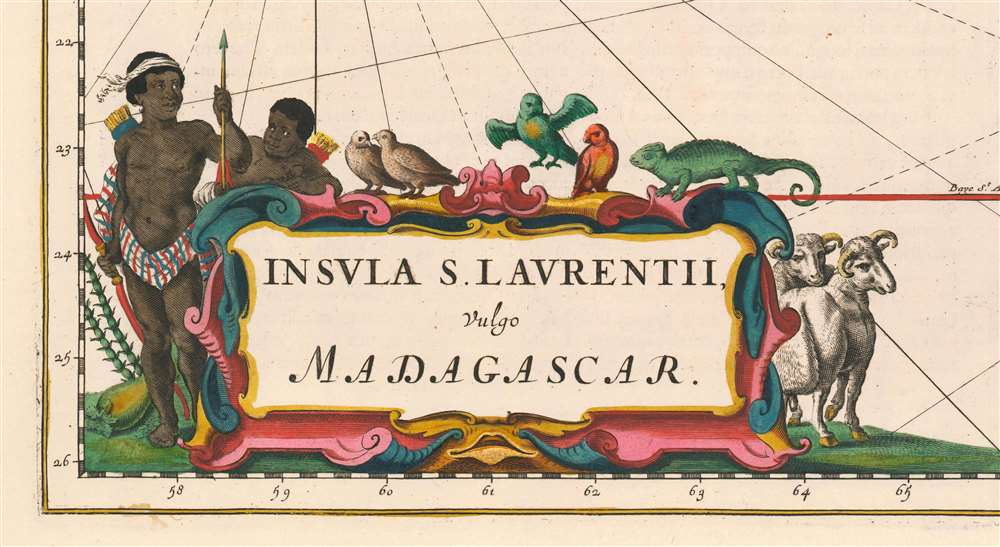 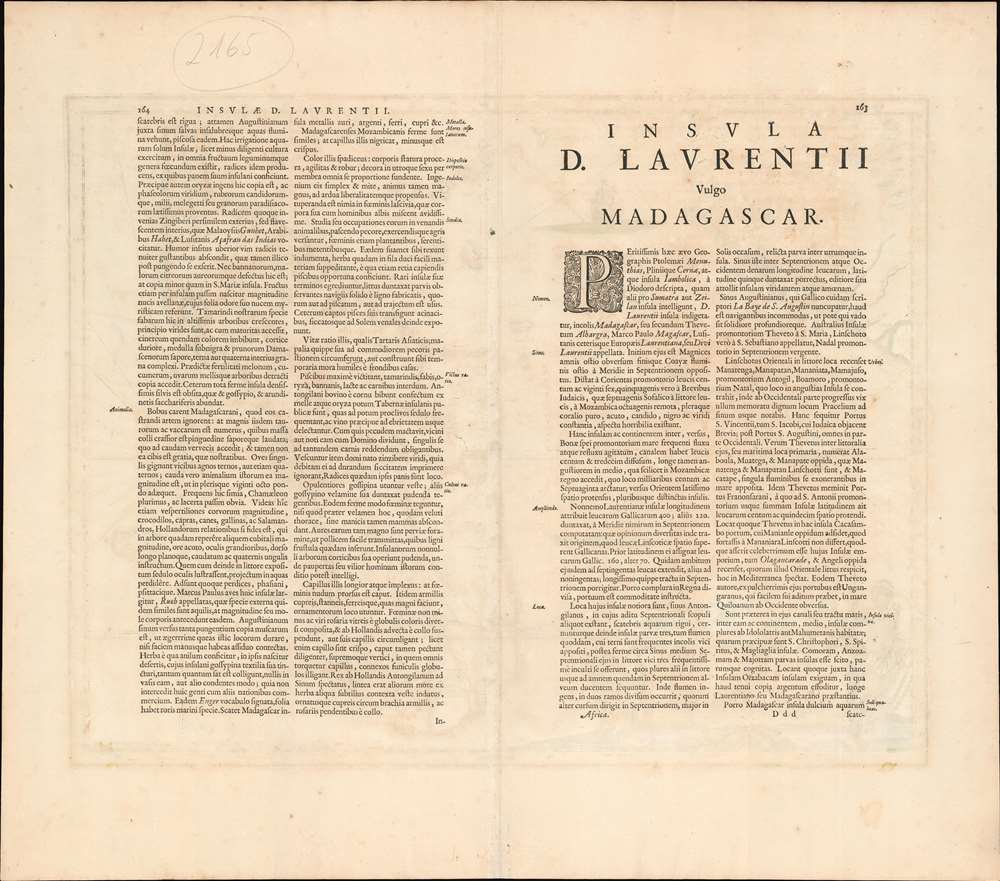 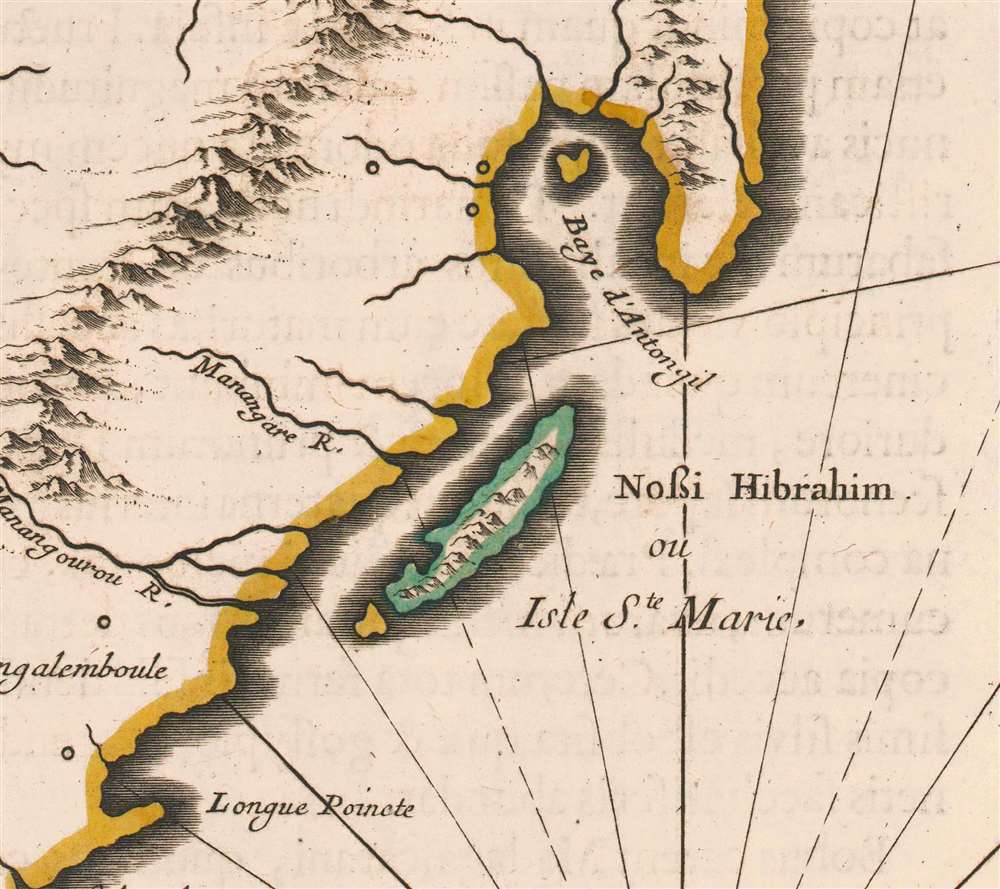 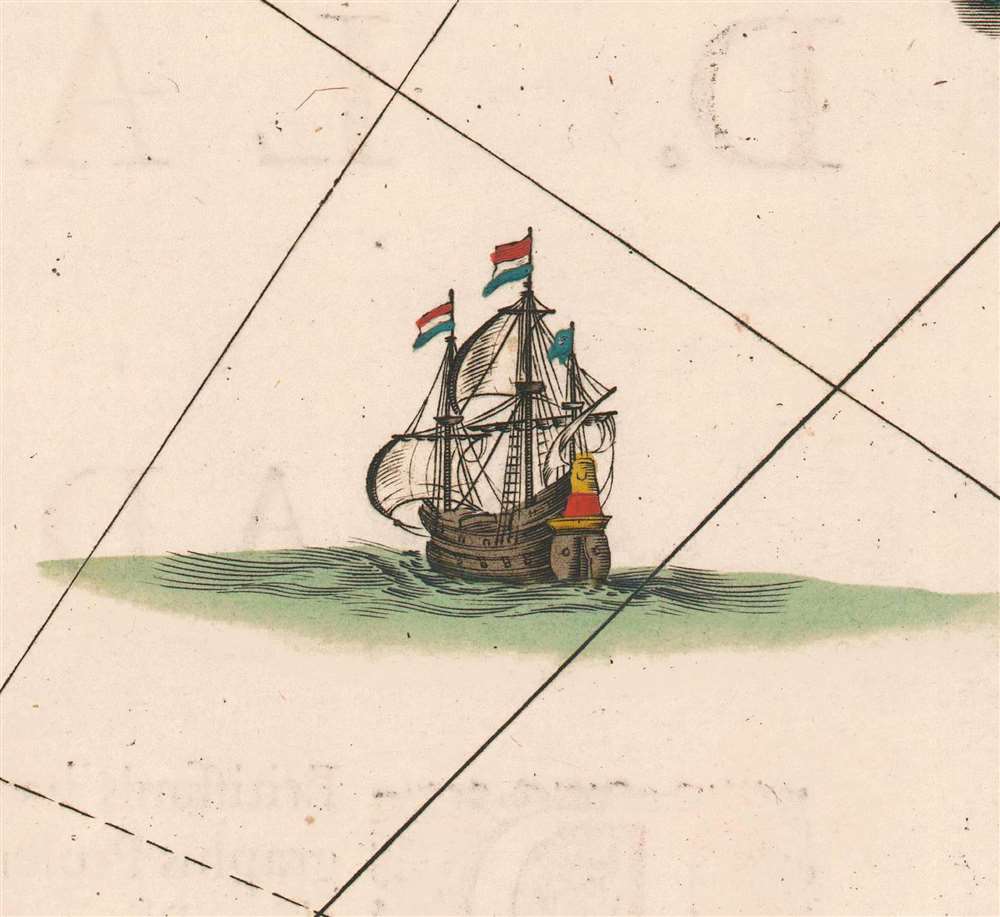 The first Blaeu edition of the first map of Madagascar based on firsthand report.
$1,200.00

This is the first, 1662 edition of Joan Blaeu's map of Madagascar, in a superb original color example heightened with gold. It is among the scarcest of Blaeu's atlas maps,and one of the most beautifully engraved. This example is particularly desirable, featuring sumptuous original color and delicate gold highlighting.

Quite aside from its aesthetic charms, this is the first acquirable map of Madagascar to show the island produced by someone who actually lived there. The map was drawn by Étienne de Flacourt, who from 1648 to 1653 was French East India’s Governor of Madagascar, and who in 1658 published the first natural history of the island, Histoire de la grande isle Madagascar. For this work, Flacourt produced an excellent (if plain) map: The Bibliotheque National de France has in its collection a manuscript map attributed to Flacourt dated 1656, a printed version of which would appear in Flacourt’s 1658 Histoire entitled Isle de Madagascar autrement dicte Isle St. Laurens. Par le Sr. de Flacourt, 1657. This would represent the first mapping of the island to improve substantially on Linschoten, and was far superior to any map of the island produced prior to it – including Sanson’s map of 1657 (which though contemporaneous to Flacourt’s map, is astonishingly crude in comparison.) It is a credit to Joan Blaeu’s influence, reach, and discernment that he was able to secure Flacourt’s map as a source for his new map of Madagascar - his version of this map pre-dates even that of the French geographer De Fer, whose copy of Flacourt’s map would not appear until 1666. Even today, Blaeu’s 1662 map remains the earliest version of this geography available to the collector. We see absolutely no copies of the separate 1657 map in price records, or in auction histories.

The mapping of Madagascar proper is characterized with many rivers and settlements – all closely hewing to the source map. In particular, the map is detailed in the southeast portion of the island: Fort Dauphin, the main French settlement established in 1642 and in which Flacourt’s governorship was based, and in which he personally explored.

Just off the east coast of Madagascar lies the Isle St. Marie. First named Santa Maria by the Portuguese, it was the site of several failed attempts at settlement by the French and the English in the 1640s, none of which appear here. This state of affairs would not last: no later than the 1690s, Isle St. Marie would become an infamous haven for English, French and American pirates preying on the ships passing to and from India.

It is notable that an indigenous name for the island appears here on the map. Isle St. Marie's Malagasy name is Nosy Boraha; Some sources associate the name 'Boraha' with a local legendary Jonah-esque whale incident, but more frequently the name is translated to 'The Island of Abraham.' The origin of the name is obscure, but the name appearing on the map, Nossi Hibrahim, tends to reinforce not only the association with Abraham, but the notion that the name was first applied to the island by Arabic traders, whom the Portuguese had taken pains to drive from the island, partly for reasons of religion and partly to remove competition in trade.

To the east of Madagascar appears the island of Santa Apollonia, also named Isle Bourbon on the map, and now known as La Réunion. This island is shown on maps of Africa going back into the 16th century: this, however, is the first map we have encountered to attempt a detailed mapping. The name Santa Apollonia was given the island by the Portuguese, who visited it in the first decade of the 16th century. No attempt to settle Appolonia was made then, but in 1638 the French claimed it, officially occupying it in 1642 (by marooning a dozen mutineers there.) The French would change the name to Île Bourbon in 1649, in honor of the French royal house. While the shape of the island is only approximate, its mountainous interior is clearly depicted - as is the plume of Réunion's Piton de la Fournaise, one of the world's most active volcanoes whose hundreds of recorded eruptions go back to the 17th century. The French East India Company would not seriously attempt colonization of Île Bourbon until 1665, three years after the publication of this map.

The Most Attractive Early Map of the Island

Blaeu’s map was faithful to Flacourt geographically, but far outstripped it in the beauty of its execution. Blaeu opens the scope to include part of the African mainland (including sharp detail for the coast of Mozambique, and spurious detail for the legendary Mountains of the Moon.) This allows Blaeu to include more of the Islands between Africa and Madagascar, but it also allows for a more balanced composition, and gives room for four attractively-engraved sailing ships, two elegant compass roses with rhumb lines, and the map’s lively cartouche. In another nod to Flacourt’s natural history, the cartouche is filled with birds and other native fauna, including a chameleon. In a nod to the indigenous population, who prior to the 1650s had been instrumental in preventing substantial permanent European settlement on Madagascar, two indigenes are shown armed with bows and very abundant quivers of arrows.

This map is one of those produced by Joan Blaeu for inclusion in his masterpiece, the multi-volume Atlas Maior, in 1662. Only five editions were produced: two Latin, and one each in French, German and Dutch. This example appeared in first of two Latin editions, both printed 1662. Maps, such as this one, which only appeared in Atlas Maior are among the Blaeu firm's most beautifully executed and scarcest works. Only eight examples of this separate map are catalogued in OCLC.

Blaeu, Joan Atlas Maior Amsterdam, 1662.     In 1662 Joan Blaeu published his masterwork, which has been described as 'the greatest and finest atlas ever published' (Verwey, 1952): his monumental, eleven-volume Atlas Maior. This contained nearly six hundred maps, more than two hundred in excess of the Blaeus' mainstay the Atlas Novus. The former work already being renowned for the quality and beauty of its maps, Blaeu not only would add copious material but would improve the sophistication of his work: many of the newly-added maps utilized larger-sized presses and sheets, and the artistry applied to the engravings was often far superior to that of the earlier maps in the atlas - many of which by now were thirty, and some more than fifty years old. Blaeu's Atlas Maior was published from 1662 to 1672, consisting of some 594 maps compiled into upwards of 9 volumes with some editions containing as many as 12 volumes. This triumphant work's publishing life was cut violently short when, in 1672, the Blaeu's mammoth workshop was destroyed by fire; surviving stock would be sold at auction between 1674 and 1677, occasionally appearing under the imprint of later Dutch printers such as Pieter Schenk and Pieter Mortier. The maps added to the Atlas Maior, owing to their tragically short publishing life, are among the hardest-to-find of the Blaeu maps.

Excellent condition. Some text show through, else an attractive example with rich original color heightened with gold.