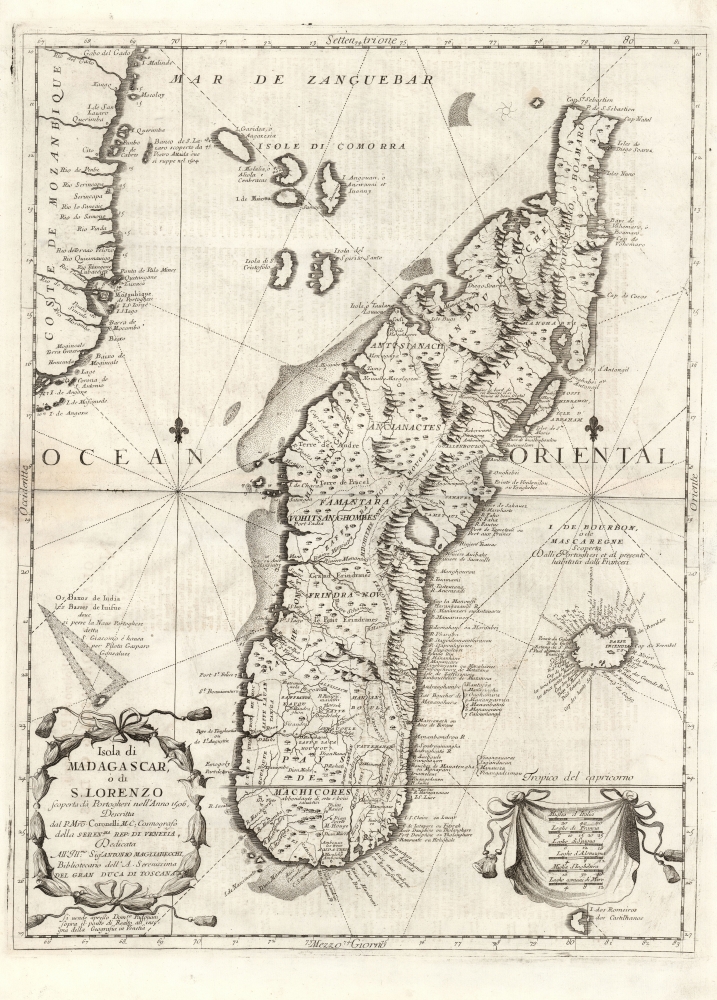 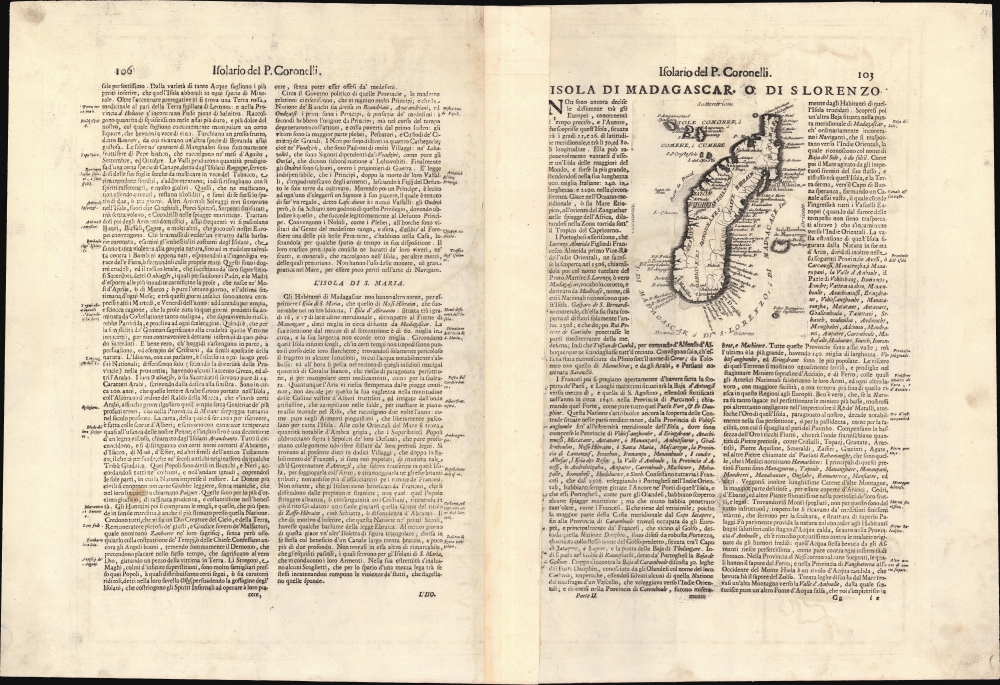 This is Vincenzo Maria Coronelli's 1697 map of Madagascar, the most sophisticated 17th century map of the island. While the southeastern portion of the island reflects the cartography of Étienne de Flacourt (1607 - 1660), who from 1648 to 1653 was French East India’s Governor of Madagascar, and who in 1658 published the first natural history of the island, this map includes detail beyond any of the French or Dutch maps sourced from Flacourt's manuscripts. Typical of Coronelli's meticulously researched work, the map provides a granular catalogue of the island's coastline toponymy. The interior has been broken into administrative regions, including tribal names not present on any earlier printed maps.

It is notable that an indigenous name for the island appears here on the map. Isle St. Marie's Malagasy name is Nosy Boraha. Some sources associate the name 'Boraha' with a local Jonah-esque whale legend, but more frequently the name is translated to 'The Island of Abraham.' The origin of the name is obscure, but the name appearing on the map, Nossi Hibrahin, tends to reinforce not only the association with Abraham, but the notion that the name was first applied to the island by Arabic traders, whom the Portuguese had taken pains to drive from the island, partly for reasons of religion and partly to remove competition in trade.

To the east of Madagascar appears I. De Bourbon, also named Mascaregne, and now known as La Réunion. This island is shown on maps of Africa going back into the 16th century. It was first named by Europeans as Santa Apollonia, a name given by the Portuguese, who visited the island in the first decade of the 16th century. No attempt to settle was made then, but in 1638 the French claimed it, officially occupying it in 1642 (by marooning a dozen mutineers there.) The French changedd the name to Île Bourbon in 1649, in honor of the French royal house. While the shape of the island is only approximate, its volcanic nature is revealed with the name Paese Incendiato. The island possesses one of the world's most active volcanoes, whose hundreds of recorded eruptions go back to the 17th century. The French East India Company would not seriously attempt colonization of Île Bourbon until 1665, two years before the publication of this map. The wealth of place names on the coast of the island here - much more than appear on earlier French maps of the region - suggests that Coronelli's source may have been positioned in or near the French East India Company.

The curious reader is encouraged to search out an image of the bust, crafted by the artist Antonio Montaiuti, or Antonio di Marco Magliabecchi - the dedicatee of this map. The artist appears to have captured the spirit of this Florentine librarian, a formidable scholar and bibliophile as dedicated to learning as he was NOT to the tidiness of his clothes and the maintenance of his personal relationships. Among bibliophiles he was truly a giant, in that he was reputed to have actually read all the books he bought. And he bought many: his library consisted of forty thousand books and ten thousand manuscripts. He so valued his time reading that he would not take time to change clothes or even undress for bed. This eccentric figure was, despite the obvious visceral challenges of associating with him, sought out by scholars from all over Europe for the depth and breadth of his knowledge, and it is plain that Coronelli valued his assistance greatly enough to dedicate this map to him.

There are only three examples of the separate map listed in OCLC: Harvard, the Bibliotheque National, and the Bayerische Staatsbibliothek. Coronelli's Atlante veneto is, however, well represented in institutional collections.

Coronelli, V., Atlante Veneto, (Venice: Albrizzi) 1697.     The Atlante Veneto was a Venetian cosmographic atlas issued by the Jesuit Minorite friar, geographer, and globe maker Vincenzo Maria Coronelli. The Atlante Veneto was a massive work consisting of some 13 volumes in four parts. The first section focused on a general introduction to geography and included notes a various geographic systems and globes. The second part consisted of world maps from various periods and in various styles, including double page maps of the continents and poles derived from his earlier globe work. The third part focused on hydrography and included nautically styled maps of important rivers, bays, oceans, lakes, and gulfs. The fourth and final section detailed exploration and describing noting various explorers and their discoveries. The whole consisted of some 191 engraved charts and maps as well as an assortment of views and decorative plates. The atlas was conceived as a continuation of Blaeu's Atlas Major and in many respects follows Blaeu cartographically. Many of the other maps are derived from Coronelli's own earlier globe work and exhibit various distinctly globe-like elements. Coronelli first issued the Atlante Veneto in 1691. A second edition was prepared and issued between 1695 and 1697. Most of the individual map plates remain identical between editions. The maps of the Atlante Veneto are universally admired for their exquisite engraving and high production quality, including fine paper and premium inks. All examples were issued uncolored and have typically been left as such by dealers and collectors.

Very good. Generous margins. Some text show through, else excellent.