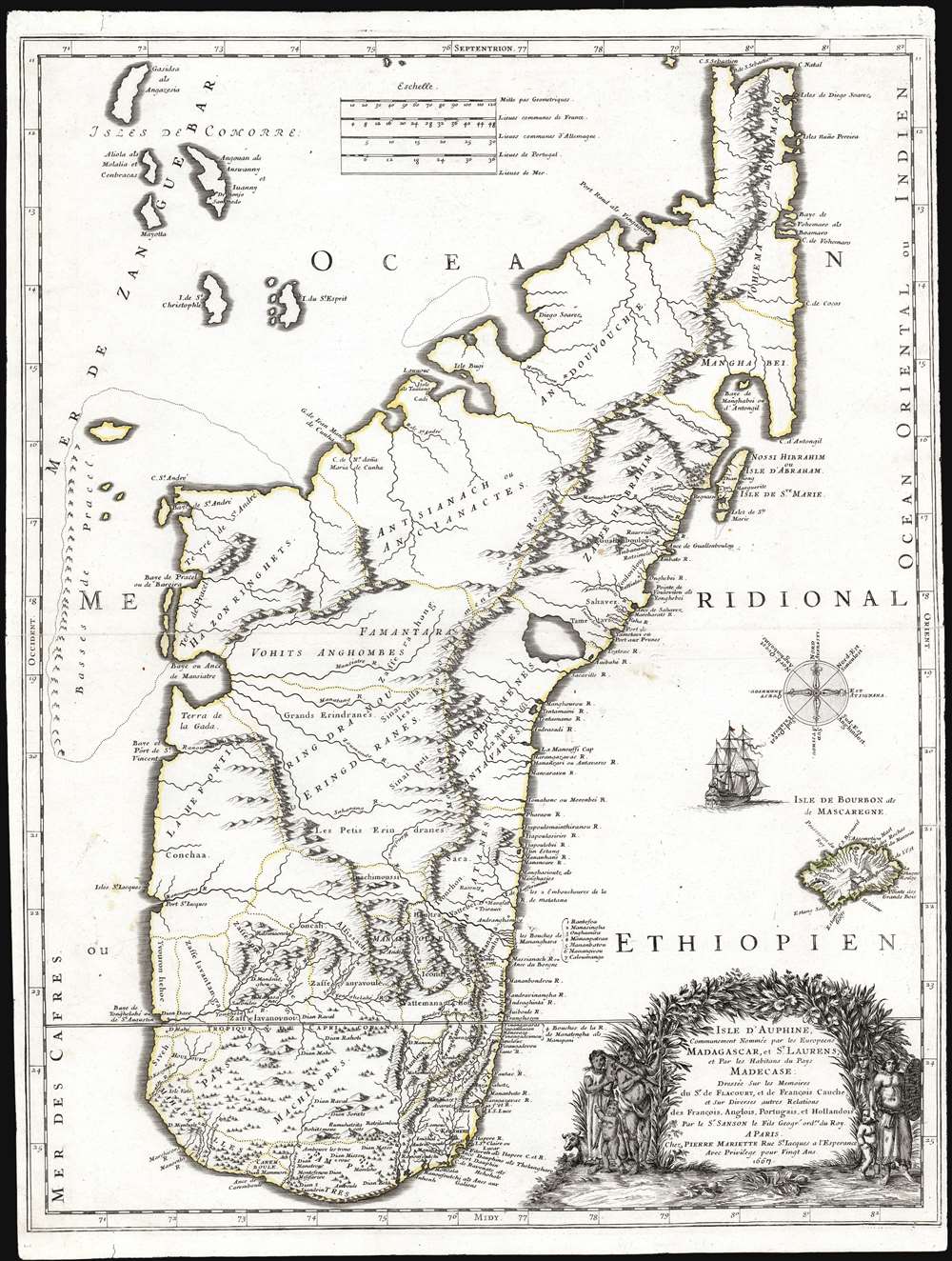 This is the first edition of Nicolas Sanson's 1667 new map of Madagascar. This map represents the most significant advancement of Madagascar cartography since the map of Étienne de Flacourt (1607 - 1660), who from 1648 to 1653 was French East India’s Governor of Madagascar, and who in 1658 published the first natural history of the island,Histoire de la grande isle Madagascar.

For this work, Flacourt produced an excellent (if plain) map: The Bibliotheque National de France has a manuscript map attributed to Flacourt dated 1656, a printed version of which appeared in Flacourt’s 1658 Isle de Madagascar autrement dicte Isle St. Laurens. This represents the first mapping of the island to improve substantially on Jan Huyghen van Linschoten's (1563 - 1611) work, and was far superior to any map of the island produced prior - including Sanson’s own map of 1657 (which though contemporaneous to Flacourt’s map, was astonishingly crude.) The present map far outstrips the Flacourt and its derivatives by Blaeu and De Fer. As with those maps, the best detail is concentrated in the southeast, but the whole reflects more information than was available even ten years prior.

Just off the east coast of Madagascar lies the Isle St. Marie. First named Santa Maria by the Portuguese, it was the site of several failed attempts at settlement by the French and the English in the 1640s. This state of affairs would not last: by the 1690s, Isle St. Marie would become an infamous haven for English, French, and American pirates preying on the rich Indian Ocean trade. The map shows three settlements on the island: Regnasse, Ste. Marguerite, and 'Diannong.' It is notable that an indigenous name for the island appears here on the map. Isle St. Marie's Malagasy name is Nosy Boraha. Some sources associate the name 'Boraha' with a local Jonah-esque whale incident, but more frequently the name is translated to 'The Island of Abraham.' The origin of the name is obscure, but the name appearing on the map, 'Nossi Hibrahim ou Isle d' Abraham' tends reinforces not only the association with Abraham, but the notion that the name was first applied to the island by Arabic traders, whom the Portuguese had taken pains to drive away, partly for reasons of religion and partly to remove trade competition.

To the east of Madagascar the island now known as La Réunion, here named Isle Bourbon or 'De Mascaregne' appears. This island is shown on maps of Africa going back into the 16th century: this, however, is the most detailed 17th century mapping we have encountered. The Portuguese named the island Santa Apollonia in the 16th century, but never settled. In 1638, the French claimed it, officially occupying it in 1642 by marooning a dozen mutineers. The French changed the name to Île Bourbon in 1649, in honor of the French royal house. While the shape of the island is only approximate, its mountainous interior is clear, as is the plume of Réunion's Piton de la Fournaise, one of the world's most active volcanoes whose hundreds of recorded eruptions go back to the 17th century. The French East India Company would not seriously attempt colonization of Île Bourbon until 1665, two years prior to this map's publication.

This map was drawn by Sanson the last year of his life, but was printed by Pierre Mariette in partnership with Sanson's heirs for inclusion in their 1667 jointly-issued atlas. We see six examples of this separate map catalogued in OCLC.