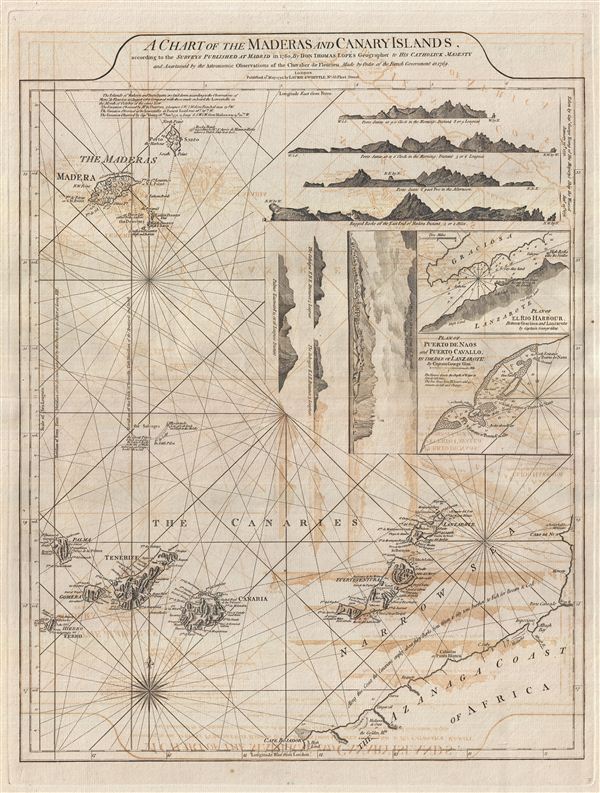 This is a fine example of Laurie and Whittle's 1794 nautical chart or maritime map of Madeira, the Savages, and the Canary Islands. The map covers from the island of Porto Santo and Madeira, southwards as far as the Cape Bojador on the Azanaga Coast of Africa, inclusive of the Canary Islands. There are eight land profile charts focusing on Porto Santo and the Savages. There is also an attractive view of the port city of Santa Cruz on Tenerife. Secondary detail charts focus on E. Rio Harbor, Puerto de Naos, Puerto Cavallo, and the Isle of Lazarote. Madeira, Porto Santo, and the Savages are autonomous regions of Portugal. The Canary Islands are administered by Spain.

Laurie and Whittle prepared this chart for their 1799 issue of the East-India Pilot. Though most charts in the East-India Pilot were derived from earlier maps prepared for Jean-Baptiste d'Apres de MannevilletteÂ's 1745 Neptune Oriental, this particular chart is a new production first issued by Robert Sayer for his West India Atlas. The map offers rich detail including countless depth soundings, notes on the sea floor, commentary on reefs, rhumb lines, shoals, place names and a wealth of other practical information for the mariner. This map was registered by Laurie and Whittle from their offices at 53 Fleet Street, London, on May 12, 1794.