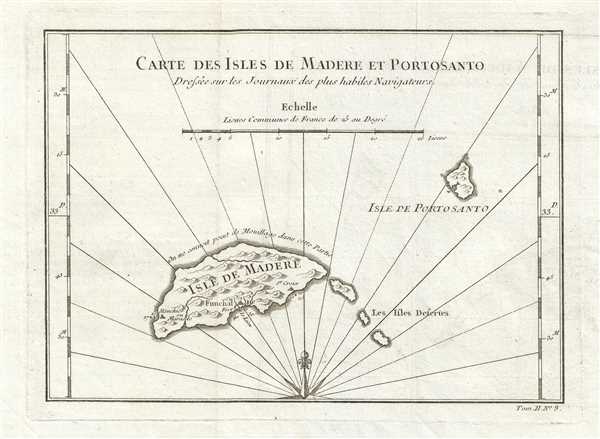 This is a 1746 Jacques-Nicolas Bellin map of Madeira and Porto Santo, Portugal. The map depicts the islands of Madeira, Porto Santo, and the Desertas Islands, an archipelago 250 miles south of the Canary Islands. Very attractive, the important details of the islands are included. Funchal, St. Croix, and Manchico are labeled on Madeira. Harbors are labeled at St. Croix and Manchico. A settlement is depicted on Porto Santo, along with a harbor, although it is not labeled. Along the northern coast of Madeira, a note is included, stating 'On ne connoit point de mouillage dans cette partie' (We do not know of any anchorage in this part). In other words, there were no known anchorages on that side of the island. Today, Madeira has been an autonomous region of Portugal since 1976, and is also a region of the European Union.

This map was produced by Jacques-Nicolas Bellin in 1746.