1854 Pharoah Map or Plan of the City of Madras or Chennai, India 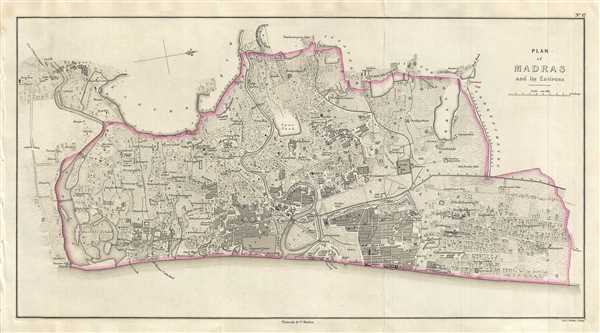 1854 Pharoah Map or Plan of the City of Madras or Chennai, India

This is a scarce 1854 map or plan of the city of Madras or Chennai in the Indian state of Tamil Nadu. It covers the city located on the Coromandel Coast and extends from the Adyar River north to the Captain Cotton Canal and Tondiarpet. The map is incredible detailed and notes streets, individual buildings, palaces, forts, canals, tanks, neighborhoods, fields, and several other important landmarks. Fort St. George is identified near the Cooum River.

Fort St. George was the first major English settlement in India built by the English East India Company in 1640. The city of Madras (now named Chennai) grew around the fort, becoming a naval base and the administrative center for the British in Southern India. Today the city of Chennai is the fourth largest city in India.

This map was engraved by J. and C. Walker and issued as plate no. 47 by Pharoah and Company in their 1854 Atlas of Southern India.