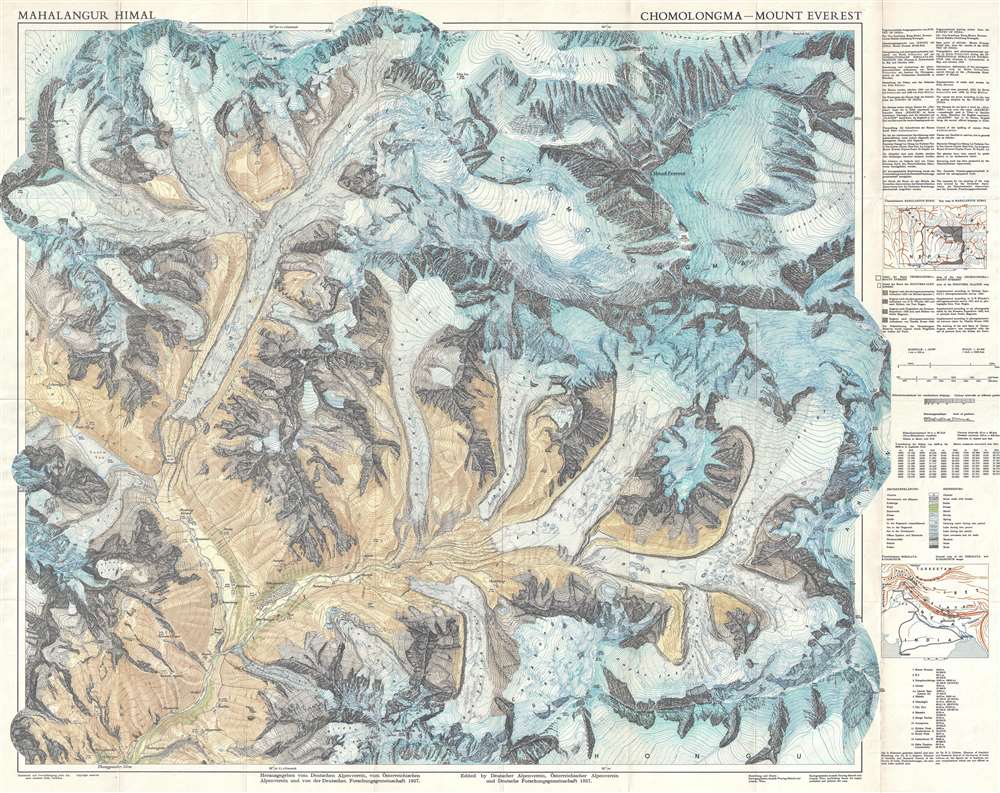 Bilingual German and English map of the region around Mount Everest.

This is the first and most important modern map of the Mount Everest region. This extraordinary map was published in 1957 by the Deutscher Alpenverein (German Alpine Club) and Österreichischer Alpenverein (Austrian Alpine Club) based upon photogrammetric survey work conducted by Erwin Schneider during the 1955 Norman G. Dyrhenfurth Himalaya Expedition. The six-color chromolithograph map depicts the Khumbu, or the south (Nepalese) approach Mount Everest, which appears in the upper right, covering from Tsolatse to Baruntse and from Lingtren to Ama Dablam. The detail throughout, down to stone walls and tiny paths, is an extraordinary representation of the Khumbu's complex terrain. Topography is represented by contours at 20-meter intervals with every 100 meters emphasized.

Over the course of some five months of intensive work, Schneider's field sketches and diagrams were turned into relief-like illustrations of bedrock, moraines, glaciers, and more by Austrian cartographic draftsman Fritz Ebster (1901 - 1979). Stylistically it follows in the model of the Österreichischer Alpenverein (Austrian Mountaineering Club) maps, with which Ebster would have been most familiar.

Terrestrial Photogrammetry is the science of determining geographical positions and making maps from photographs taken from high-altitude vantage points. It was developed in the mid-19th century with the invention of photography. The essential premise is that the distance between two points that lie on a plane parallel to the photographic image's plane can be determined by measuring their distance in an image, presuming that the scale of the image is known. The techniques were highly refined during World War II and following the war, more scientific uses for the system were embraced - as here.

The Best Map of Everest

Large and beautifully colored, myriad glaciers, mountains, and villages are identified. Topographical lines wind their way throughout the map, with elevations noted every 100 feet. Summit elevations are given in both feet and meters. Mount Everest is situated above and to the right of center, is labeled both as Mount Everest and as Chomolongma, its name in Tibetan. A fair amount of information concerning the map's creation, notations, and the origins of some of the names used is situated along the right border and is given in both German and English. A key map of the Mahalangur Himal is also located along the right side, informing the viewer that, along with the map offered here, several more specific maps of the region were also created.

This map is based upon the survey work of Edwin Schneider and was drawn by Fritz Ebster. It was published jointly by the Deutscher Alpenverein, Österreichischer Alpenverein, and Deutsche Forschungsgemeinschaft (a German research firm) . It was printed by Kartographische Anstalt Freytag-Berndt und Artaria of Vienna in 1957. While the map is present in institutional collections, it is rare to the market and highly desirable

Erwin Hermann Manfred Schneider (April 13, 1906 - August 18, 1987) was an Austrian cartographer and mountaineer active in the middle part of the 20th century. Schneider was born in Jáchymov, a Bohemian mining town on the German-Czech border. He initially studied in Idira (Idrija), Slovenia before moving on to higher studies in Salzburg. He enrolled in the Technical University of Charlottenburg in Berlin, Germany, from 1924 - 1935, where he studied mining. Schneider was a very active professional mountain climber, ascending some 5 of the 11 seven-thousand foot peaks, earning him the nickname, 'Seven-Thousand King.' He was a member of the Association for Comparative High Mountain Research (Arbeitsgemeinschaft für vergleichende Hochgebirgsforschung) and official cartographer of the German Alpine Association (Deutscher Alpenverein). Schneider was the lead cartographer on the important Norman G. Dyrhenfurth Himalaya Expedition of 1955 which produced the first and most important modern survey of the Nepalese approaches to Mount Everest, published in 1957. His corpus also includes a series of important mountaineering maps of Nepal that are generally known as the 'Schneider Maps'. Learn More...


Deutscher Alpenverein (German Alpine Club) (1869 - 1945 ; 1952 - present) is the world's largest climbing association and the eighth-largest sports union in Germany. Founded on May 6, 1869 in Munich, the association number over one thousand members before the end of its first year. The German and Austrian Alpine Clubs merged in 1873 to form the Deutschen und Oesterrichischen Alphenverein (DOAV) (German and Austrian Alpine Club), which existed until the Anschluss (the annexation of Austria by Nazi Germany) in 1938, when the organization was renamed Deutscher Alpenverein (DAV). During the war the DAV was incorporated into the National Socialist League of the Reich for Physical Exercise and continued is nationalist and antisemitic policies that began before World War I and continued until the end of World War II. The DAV was disbanded in 1945 and the Austrian Alpine Club (Österreichischer Alpenverein) held its assets as trustee. The DAV was reestablished in 1952. Learn More...


Österreichischer Alpenverein (OAV) (Austrian Alpine Club) (1862 - 1938 ; 1945 - present) is the largest mountaineering association in Austria. Founded in 1862, the OAV was the first mountaineering association in continental Europe and the second association in the world, second only to the British Alpine Club. The OAV merged with the Deutscher Deutscher Alpenverein (German Alpine Club) in 1873 to form the Deutschen und Oesterrichischen Alphenverein (DOAV) (German and Austrian Alpine Club). DOAV existed until the until the Anschluss (the annexation of Austria by Nazi Germany) in 1938, when the group was renamed the Deutscher Alpenverein (DAV). During the war the DAV was incorporated into the National Socialist League of the Reich for Physical Exercise and continued is nationalist and antisemitic policies that began before World War I and continued until the end of World War II. The OAV was reestablished in 1945 and held the assets of the DAV as trustee until it was reestablished in 1952. Learn More...