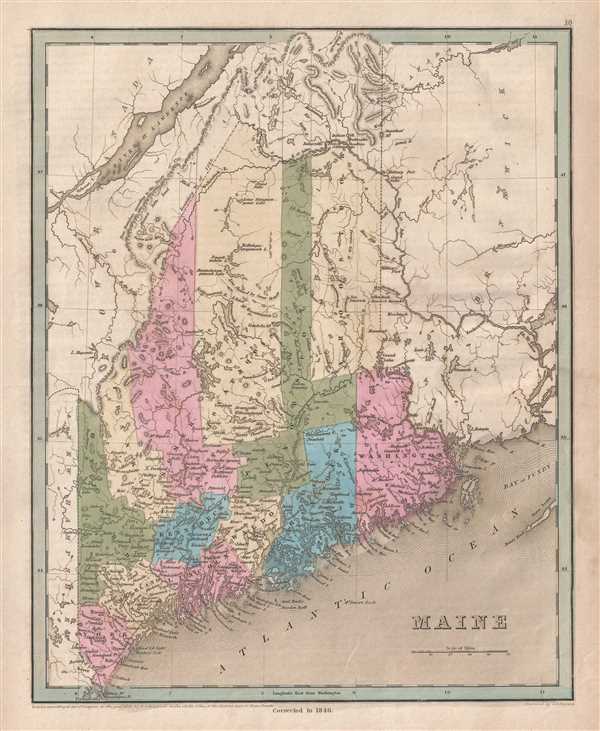 References the border dispute between the United States and British Canada known as the Aroostook War.

This is an 1846 Thomas G. Bradford map of Maine. The map depicts the region from Quebec (Lower Canada) and New York to New Brunswick and from Canada to the Atlantic Ocean. The most intriguing element illustrated here reflects the changes to the border between Maine and British Canada established by the Webster-Ashburton Treaty

The Aroostook War and the Webster-Ashburton Treaty

The Webster-Ashburton Treaty, which ended the Aroostook War (also known as the Pork and Beans War), and fixed the border between the United States and British Canada. A dispute over 13,000 square miles of land between modern-day Quebec and New Brunswick, erupted mostly due to disputes over logging rights in the region. This war, between British colonies in Canada, and American forces in the state of Maine, really should be called an international incident. No one was killed, two Canadian militiamen were injured, and several British were taken prisoner, but there was never a significant engagement between the two sides. The treaty, signed by U.S. Secretary of State Daniel Webster and British diplomat Alexander Baring, 1st Baron Ashburton in August 1842, gave the United States over half of the disputed territory. Here, Bradford illustrates both the newly agreed-upon border, along with the 'true border according to the Treaty of 1783'. The phrase 'true border' lends itself to the presumption that Bradford was unhappy with the treaty, like many of his countrymen.

Highly detailed, each county is labeled and color coded for easy differentiation. Numerous cities and towns are labeled, along with rivers and lakes. The railroad from Kittery to Portland is also illustrated.