1827 Vandermaelen map of the Straits of Malacca and Singapore 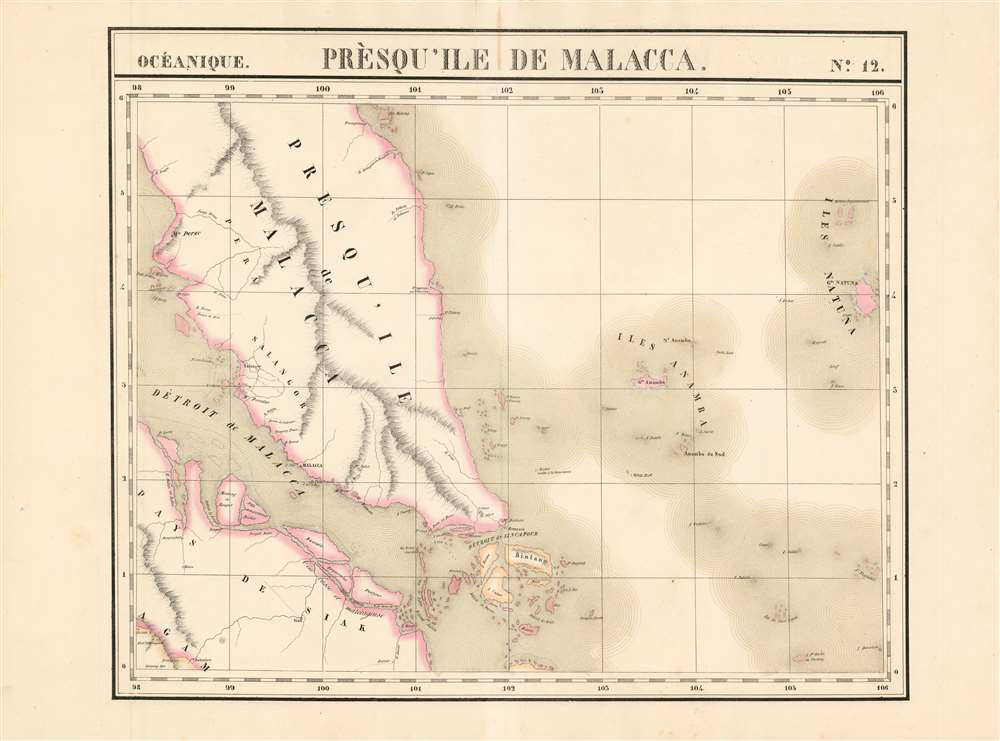 1827 Vandermaelen map of the Straits of Malacca and Singapore

The First Large-Scale Atlas Map of the Malacca Straits and Singapore Island
$950.00

This is 1827 Vandermaelen map of the waters surrounding Singapore Island and the Malay Peninsula. It is the first large-scale atlas map to focus on the area, and the first to be executed in lithography. The map shows Singapore Island, Bintan, Kepulauan Anambas, Kepulauan Natuna Besar and part of Sumatra. The interior details of Malacca- particularly the attractively hachured mountains appearing on the Malay Peninsula - reveal that despite the presence for nearly eight years of an English colony on Singapore, European knowledge of this part of the world remained scant. In all fairness, this ignorance cannot be laid entirely at Vandermaelen's feet: the Jackson plan itself would not be published for still another year, in 1828, and it was the first map to show the colony.

This map appeared in the sixth part, 'Océanique,' of Vandermaelen's Atlas universel de géographie physique, politique, statistique et minéralogique. The atlas was produced in one edition in 1827; only 810 complete sets were sold. The full set of six volumes appears in eleven institutional collections in OCLC; the 6th volume alone is listed in 10. This map is listed as a separate only in the collection of the National Library Board of Singapore.

Vandermaelen, P. Atlas universel de geographie physique, politique, statistique et mineralogique (Bruxelles, Vandermaelen) 1827.     Atlas Universel de Geographie. This great work, featuring some 378 unique maps and compiled over three years, was the first lithograph atlas, and the first to render the world on the same projection and at a uniform scale. It was no doubt Vandermaelen’s training a globe maker that led him see the need for an atlas rendered uniformly so that all bodies could be understood in relation to one another. As a result, many newly emerging areas received more attention than prior efforts. Maps of the American West, in particular, benefited: ‘no mapmaker had previously attempted to use such a large scale for any western American area.’ (Wheat). Central and South Asia also appear in sharper focus. Despite Vandermaelen’s reliance upon existing sources, his maps very frequently provided the clearest depictions available of many poorly-understood parts of the world. The atlas was an expensive production, costing $800 in 1827. Subscription lists indicate that only 810 full sets of the atlas were sold. It was printed on high-quality paper with superior hand coloring and was engraved in a clear, legible style. Conjoined, the maps of Vendermaelen's atlas would create a massive globe some 7.75 meters in diameter, a feat which was accomplished at the Etablissement Geographique de Brussels.