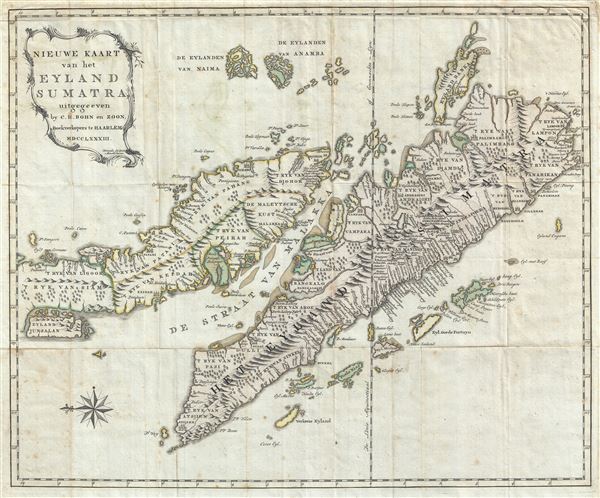 Exceedingly rare map of Singapore and the Straits of Malacca.

A fine engraved 1783 map of the Malay Peninsula, Singapore, the Straits of Malacca, and Sumatra by Christoph Heinrich Bohn. Oriented to the east, Bohn's map covers from the Island of Junsalan (Penang / Prince of Wales Island / Pulu Pinang) south as far as the Straits of Sunda and west to Atsjien (Banda Aceh) at the western tip of Sumatra. It extends eastwards to the Anambas Islands and the Bangka-Belitung Islands. Topography is rendered in profile. The map also offers limited submarine detail through the Strait of Malacca. Several small towns, most notably Soengei Pao, appear in the vicinity of modern day Kuala Lumpur. Johor is identified as Djohor. The island of Singapore is presented but not named.

Cartographically this map is derived from the 1726 map of Francois Valentijn. Francois Valentijn (1666–1727) was a minister, naturalist and writer who is best known for his Oud en Nieuw Oost-Indien (Old and New East-India), a history of the Dutch East India Company (VOC) and their activities in the East Indies. Valentijn's maps were among the most accurate and large scale productions detailing the East Indies thus far published. As VOC officer, Valentijn doubtless had access to VOC manuscript records which he complied into his remarkable collection of maps. In fact, Valentijn's maps are so superior to previous maps that their publication itself is rather surprising. The VOC's policy of extreme secrecy, especially regarding cartographic matters, historically limited publication of their charts.

By the time Bohn published this map, in 1783, the VOC had somewhat relaxed its policy of secrecy. Nonetheless, Valentijn's map remained the standard and it is upon this work that he based his own map. Bohn's map is not, however, a slavish copy and is a wholly new engraving featuring several important updates. These are primarily focused on the arrangement of cities and districts, and correction of names, in southwestern Sumatra. Eyland Junsalan, or modern day Penang, is overlarge. Bohn further added a decorative cartouche of a rococo ethic.

This map was published by Bohn en Zoon (Bohn and Sons) in Amsterdam and engraved by Krevelt for publication in Schirach and Eschelskroon's 1783 Beschryving van het Eiland Sumatra. Both the book and this map are exceedingly scarce. We have found no other examples offered for sale, or ever offered, and only a few examples of the book itself in institutional collections. A once in a lifetime collecting opportunity.

Yale University, Beinecke, Nff86 I61 783Ep.
Looking for a high-resolution scan of this?