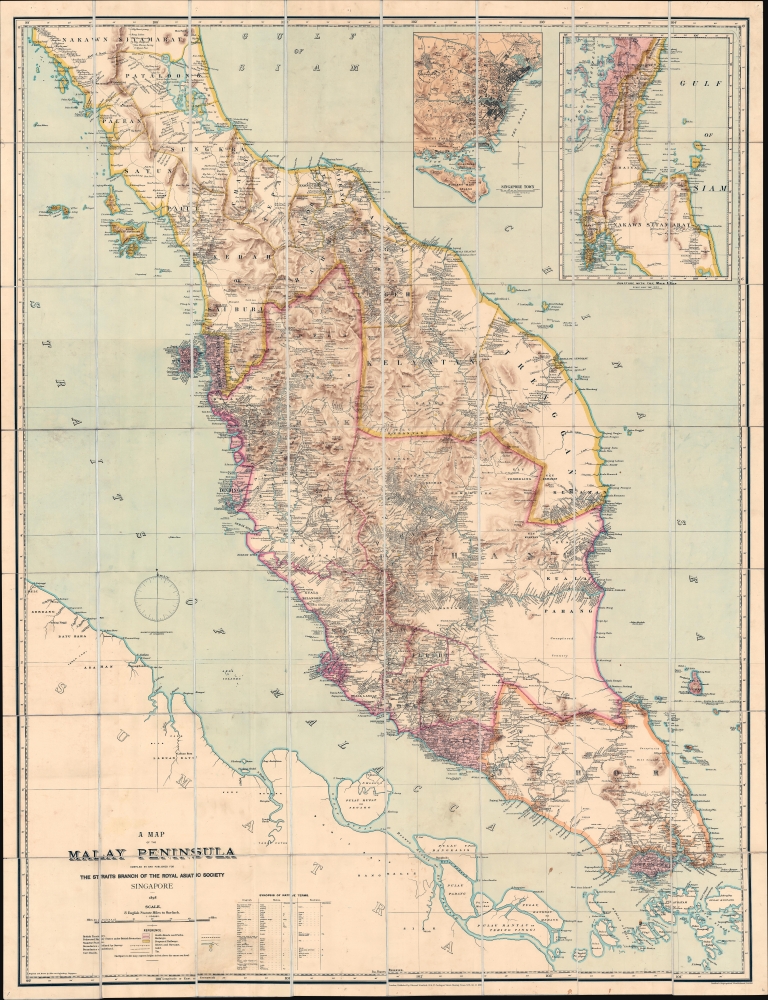 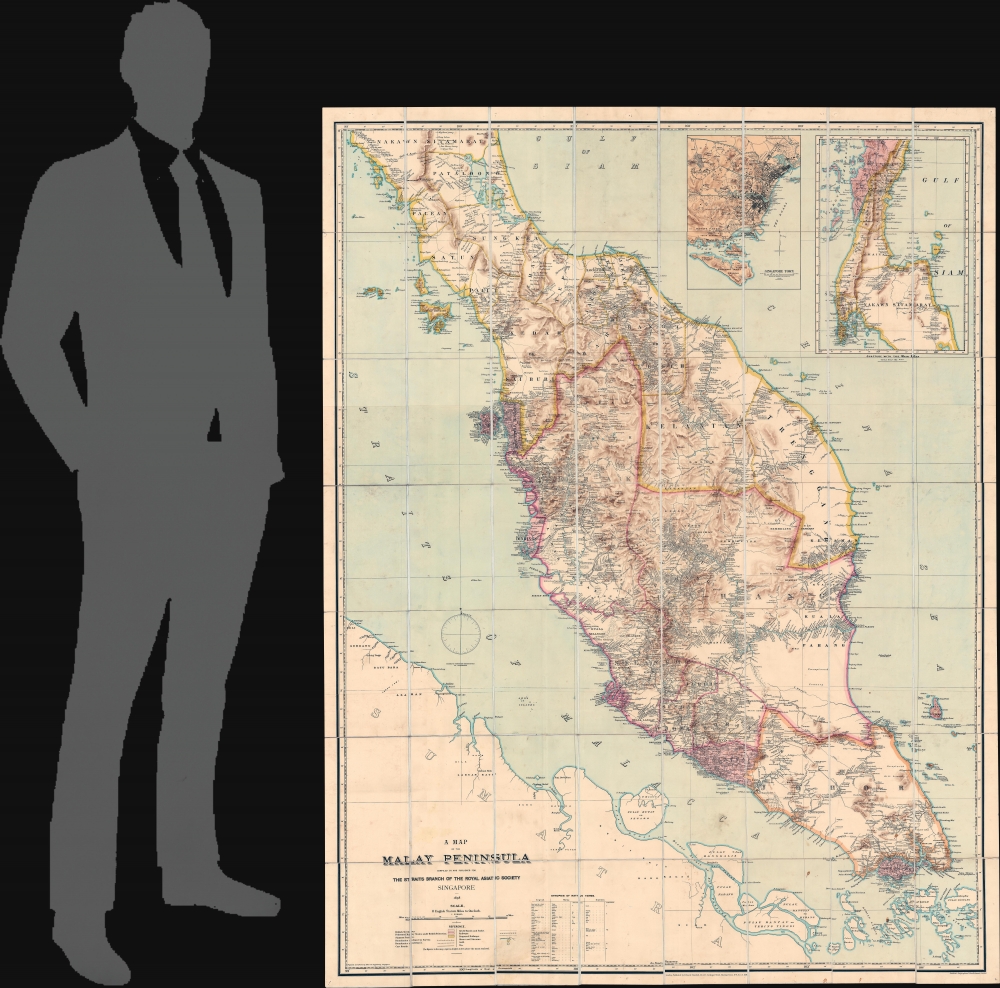 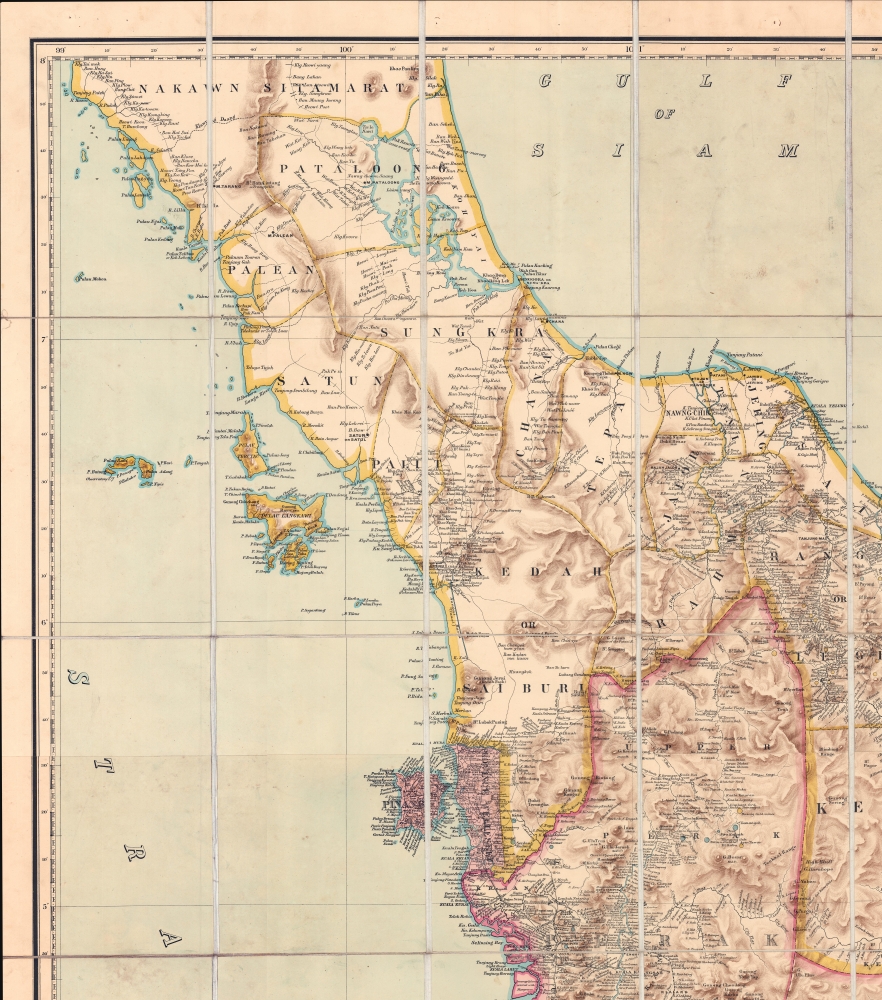 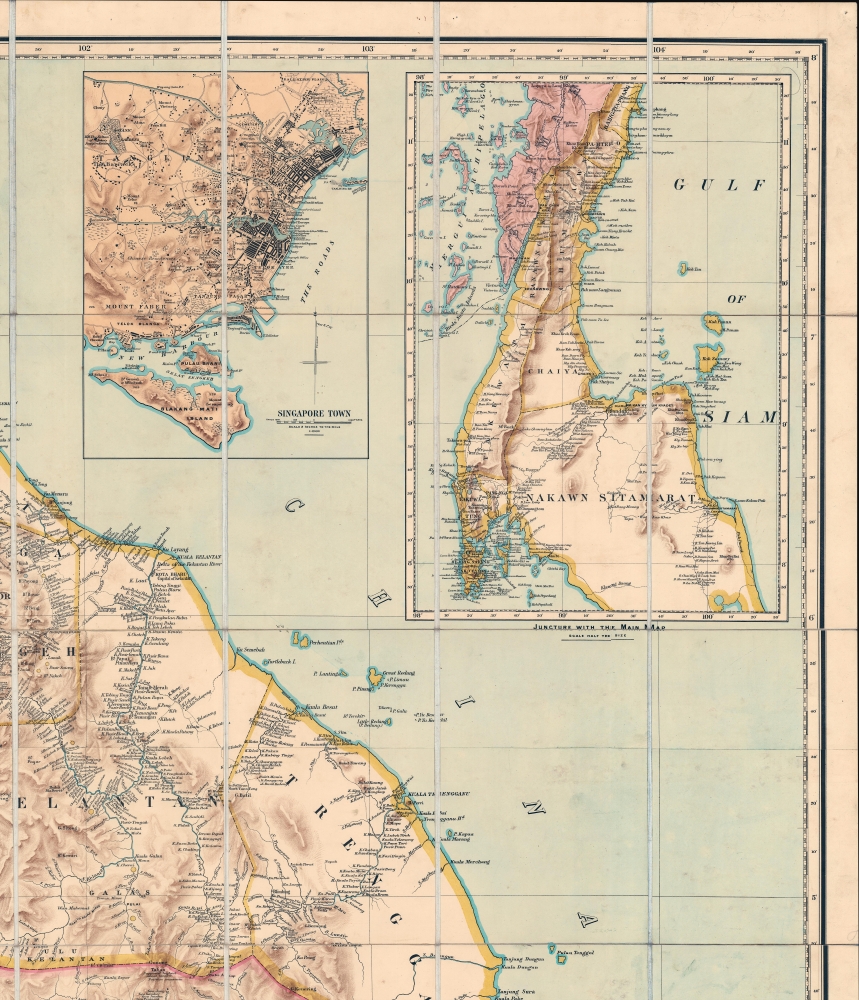 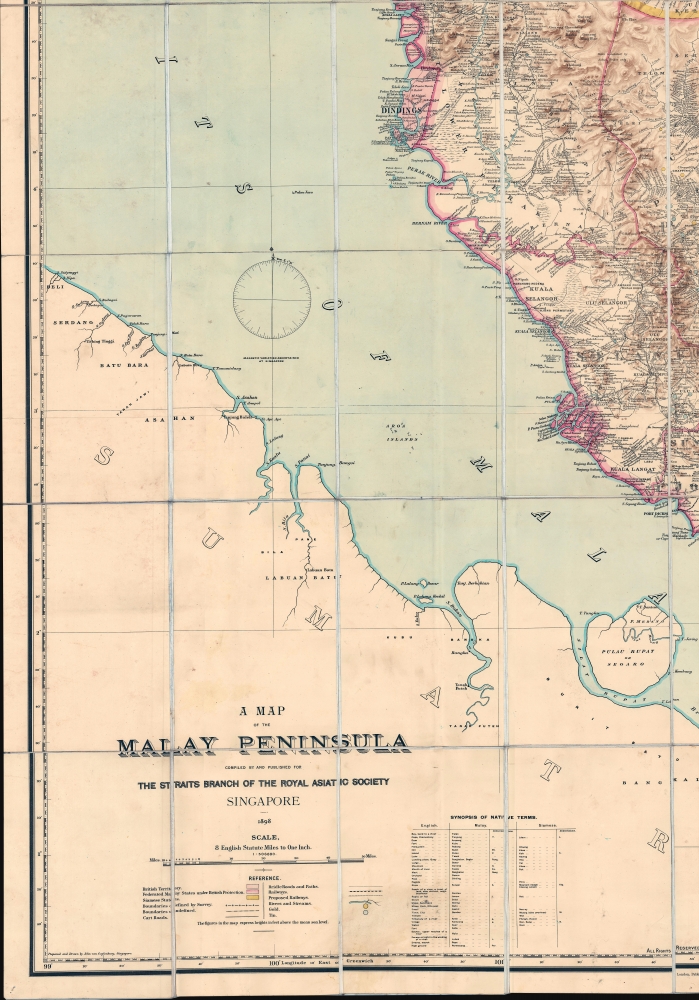 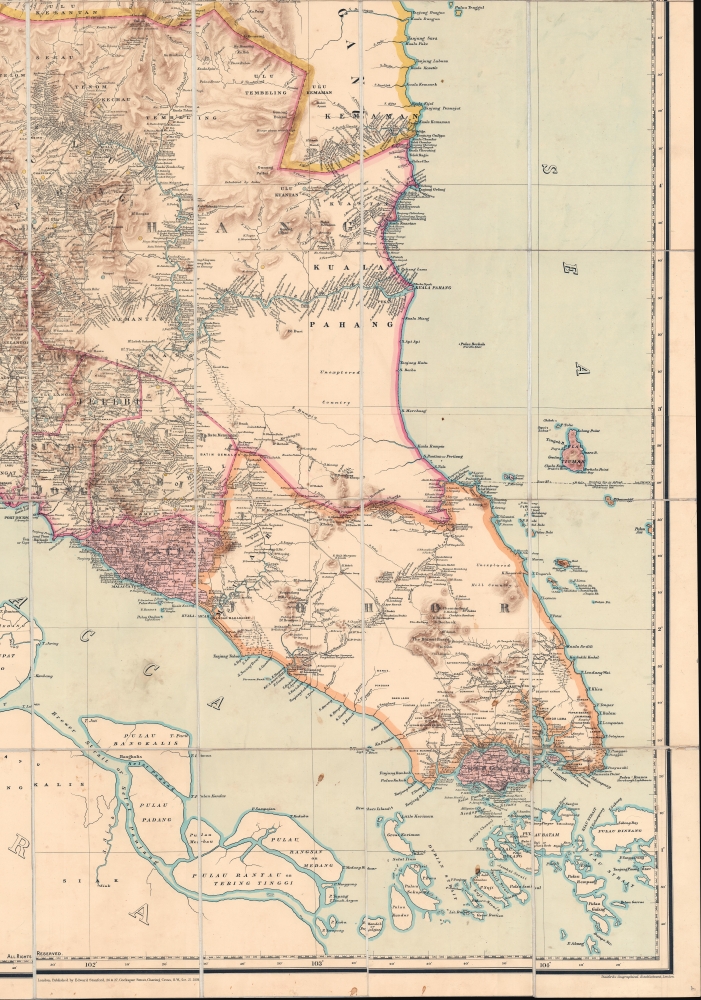 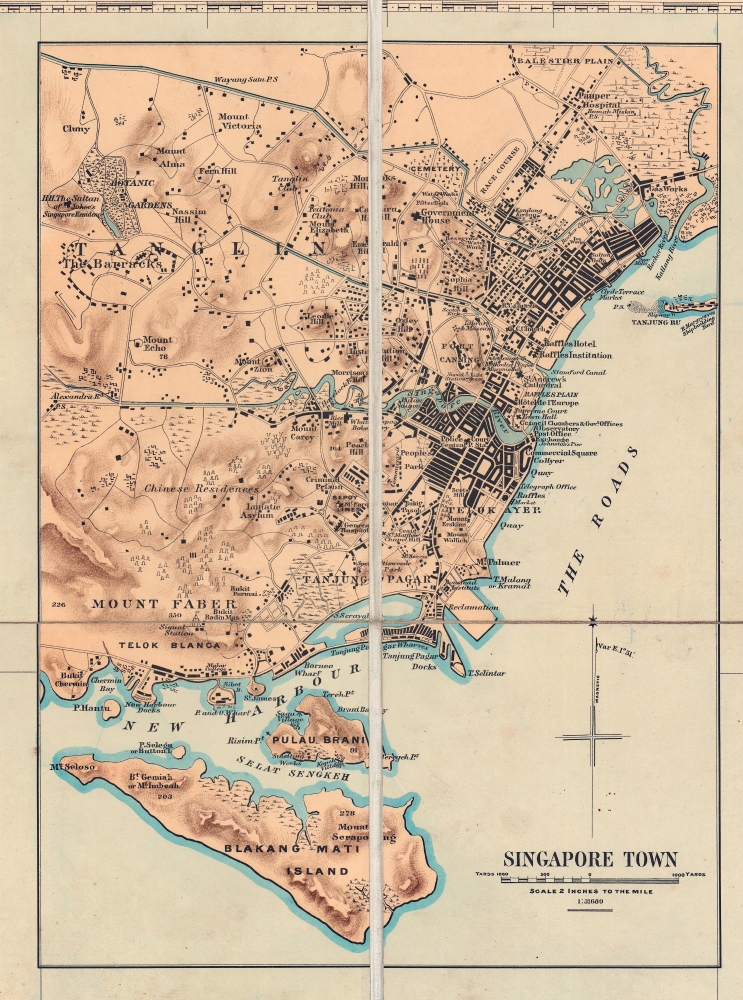 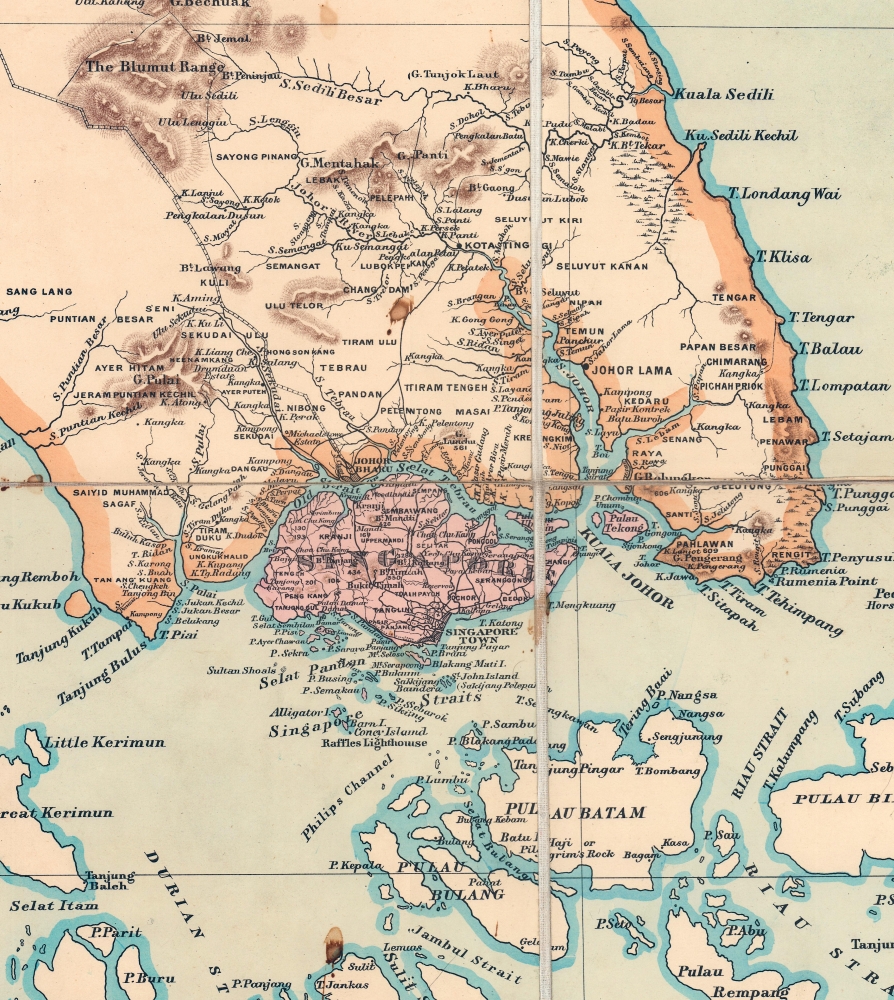 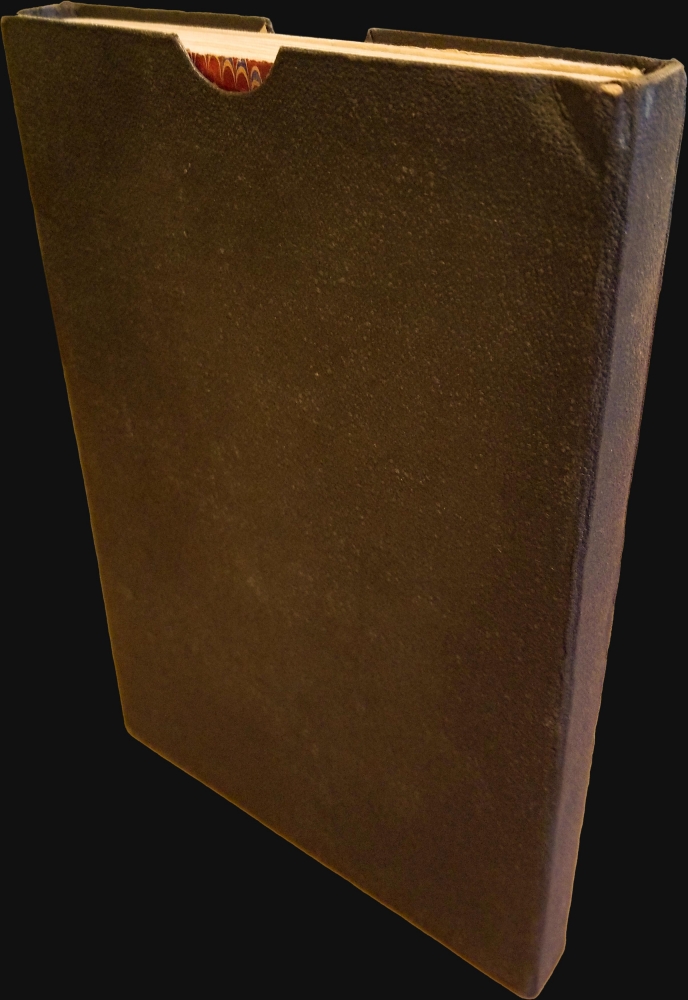 One of the most important 19th-century maps of the Malay Peninsula to appear on the market in recent decades, this is the definitive large-scale 1898 masterplan created by and for the colonial administration of British Malaya. This chromolithograph map captures a critical moment in Malay history where Britain was beginning to consolidate its suzerainty over the resource-rich peninsula. The enormous map (more than 60 inches high!) was drawn and compiled by the premier Royal Asiatic Society surveyor, John van Cuylenburg, and published in large-scale format in London by Edward Stanford's Geographical Establishment. Coverage extends roughly from Phatthalung and Trang, Siam/Thailand south to include Singapore and the adjacent straits. British colonial beachheads.

The first edition of this map appeared in 1879 - at a time when little was known of the Malay peninsula beyond the straits littoral. Colonial entrepôts, among them Singapore, Malacca, Dindings, and Penang were lavished with attention by both civilian and military surveyors. But, beyond major towns and transport corridors, most of Malaya remained uncharted. The combination of dense jungles, mountainous terrain, and malaria, kept European surveyors at bay until the late 19th century. The expense of completing such surveys was simply impractical. This changed with the founding of the Straits Branch of the Royal Asiatic Society, inaugurated in November 1877 at Singapore’s Raffles Library. The RAS was capable of raising significant resources to conduct expeditions throughout the peninsula, leading to an explosion of new data.

One of the key objectives of the RAS was to produce a grand general map of the Malay Peninsula, exceeding any existing map in size, accuracy, and comprehensiveness. The Society charged Emile John D‘Souza (February 1, 1862 - 1896) of the Surveyor General‘s Office in Singapore with drafting the gargantuan manuscript, which upon its completion was sent to London to be lithographed by Edward Stanford. Thus the first edition of this map appeared in 1879. Five subsequent editions, including the present map, were issued as new surveys were completed, expeditions returned, and the peninsula developed. (see the publication history at the end of this description for more detail)

The strategic and trade significance of the Malay peninsula cannot be understated. The Peninsula is ideally situated to control the important Malacca and Singapore Straits - vital maritime arteries connecting the Indian Ocean to the China Sea. In addition, the peninsula itself is rich in resources, ranging from extensive agricultural opportunities, to wealth in gold (yellow dots), tin (blue dots), gemstones, and more.

As Europeans expanded into the China trade, they too recognized the significance of Malaya. First the Portuguese (Malacca, 1511), then the Dutch (Malacca, 1641), then the British (Penang, 1786) established beachheads. During all of this time, the seemingly impenetrable interior remained vassal states of Siam (Thailand), minor independent sultanates, or subjects of the powerful Johore Sultanate.

The political situation on the peninsula began to change in the 19th century as the British worked to consolidate their power. Georgetown was founded in 1800, Stamford Raffles founded Singapore in 1919, and the 1824 Anglo-Dutch Treaty ceded control of Malacca - creating a network of British controlled extraterritorial states. These were administratively consolidated into the Straits Settlements in 1867, and shortly thereafter, in 1874, Dindings (Manjung District of Perak) was brought into the fold.

British Power and the Railroads

Malay sultanates found themselves pressured on all sides by powerful forces - Siam to the north, Britain to the West, and Johore to the south. The British offered the beleaguered Sultans protection in exchange for trade concessions and development assistance in exchange for territory to build railroads, mines, and telegraph networks.

Much of this early railroad network is illustrated here. Malay's first railway line, connecting Taiping and Port Weld (Kuala Sepetang), was completed in 1885. A second line, opening in 1886, connected Kuala Lumpur and the port of Kuala Klang. In 1891, the line between Seremban and Port Dickson was inaugurated, followed in 1893 with the Telok Anson - Tapoh Road line.

These railroad networks served as vectors of centralized colonial power, vastly increasing British regional influence. Consequently, in 1895 Selangor, Perak, Negeri Sembilan, and Pahang, fell fully under British influence, and were consolidated as the Federated Malay States (FMS). In 1896, under the FMS, many of the peninsula's railroads merged as the Federated Malay States Railways (FMSR) - as shown here. The FMSR eventually completed the West Coast Railway, connecting Perai (opposite Penang) to Johor Bahru in 1909. Singapore was integrated into the network by the 1923 completion of the Johor-Singapore Causeway.

Although only a small part of this map, the enormous size of the map as a whole makes the 'Singapore City' inset in the upper ring one of the best and most detailed maps of Singapore to appear in the 19th century. Presented at a scale of 1: 31680, the map offers superb street-level detail. It names the Raffles Hotel (founded 1887), Collyer Quay, the Council Chambers, Town Hall, Fort Canning, St. Andrew's Cathedral the Library and Museum (Straits Branch of the Royal Asiatic Society), Emerald Hills, Alexandra Road, Botanical Gardens, Sultan of Johor’s Singapore residence, Government House, and the port at Tanjong Pagar, and more.

By the second half of the 19th century, Edward Stanford's (1827 - 1904) Geographical Establishment became the largest and most important map publisher in England. The firm leveraged unrivaled political, colonial, and academic connections, as well as an army of draftsmen, engravers, lithographers, and printers to quickly produce and update the highest quality maps possible.

Stanford's maps can roughly be divided into two types - 'library maps' and 'case maps'. The smaller format 'Library Map' was typically about 20 x 25 inches and folded into a binder, while case maps, often measuring 60+ inches, were issued in wall map or case map (as here) forms. These larger maps are distinguished not only by size, but also by function and quality. The larger-scale maps were 'masterplans' intended for use in colonial offices, academic institutions, and large merchant houses. They were produced in small quantities, but to the highest standards, and are consequently highly sought after and unimpeachable historical records. The smaller format 'library maps' were more generally intended for commercial sale and, while good maps, cannot compare to the larger 'case' maps.

This map was drawn by John van Cuylenburg for the Singapore Office of the Royal Asiatic Society. It was published in London by Stanford's Geographicus Establishment. The map appeared in five editions, each heavily updated and cartographically distinct as new information flooded into the RAS offices: 1879, 1887, 1891, 1898 (the present), and 1911. This map was issued in two physical formats, dissected, mounted on linen and folding (as here), or as six separate sheets joinable as a wall map. All editions are extremely rare due to being expensive items in their day and having been made in small quantities for a select clientele.

John van Cuylenburg (1862 - 1940) was a Dutch surveyor active in British colonies in South Asia, Malay, Singapore, and the East Indies - taking a leading role in some of the most significant regions mappings of the early 20th century. Cuylenburg was born in Colombo, Ceylon, the son of surveyor John E. van Cuylenburg. He studied at the Colombo Academy (Royal College), exhibiting an aptitude for mathematics and drawing. In 1881, he was recommended for cartographic draughtsman position with the Singapore Surveyor General Office. After arriving in Singapore, he was near immediately reassigned to Malacca, where he worked on surveys of the Malay Peninsula. He returned to Singapore in 1885, where he compiled and drafted an important map of Singapore island (Singapore: Surveyor General’s Office, 1885; revised and reissued in 1898). In 1888, he was appointed District Surveyor of Singapore - work which focused on cadastral surveys and development work around the island. He was deeply involved in learned and scientific societies in Singapore, particularly the Royal Asiatic Society. He also helped to sponsor and organize scientific expeditions in the area, some of which he participated in directly, including the 1901 Indian Ocean mapping of Christmas Island. His son, John Bertram van Cuylenburg became one of Singapore’s leading physicians, also known for his fascinating memoirs of life in the city, covering the early 20th Century and the World War II-era (Sunshine and Shadow, Singapore, 1982). For information on Cuylenburg, see Arnold Wright, Twentieth Century impressions of British Malaya: its history, people, commerce, industries, and resources (London, 1908), p. 323. Learn More...