1941 Taiwan Governor Office Map of the Malay, Sumatra, and Singapore 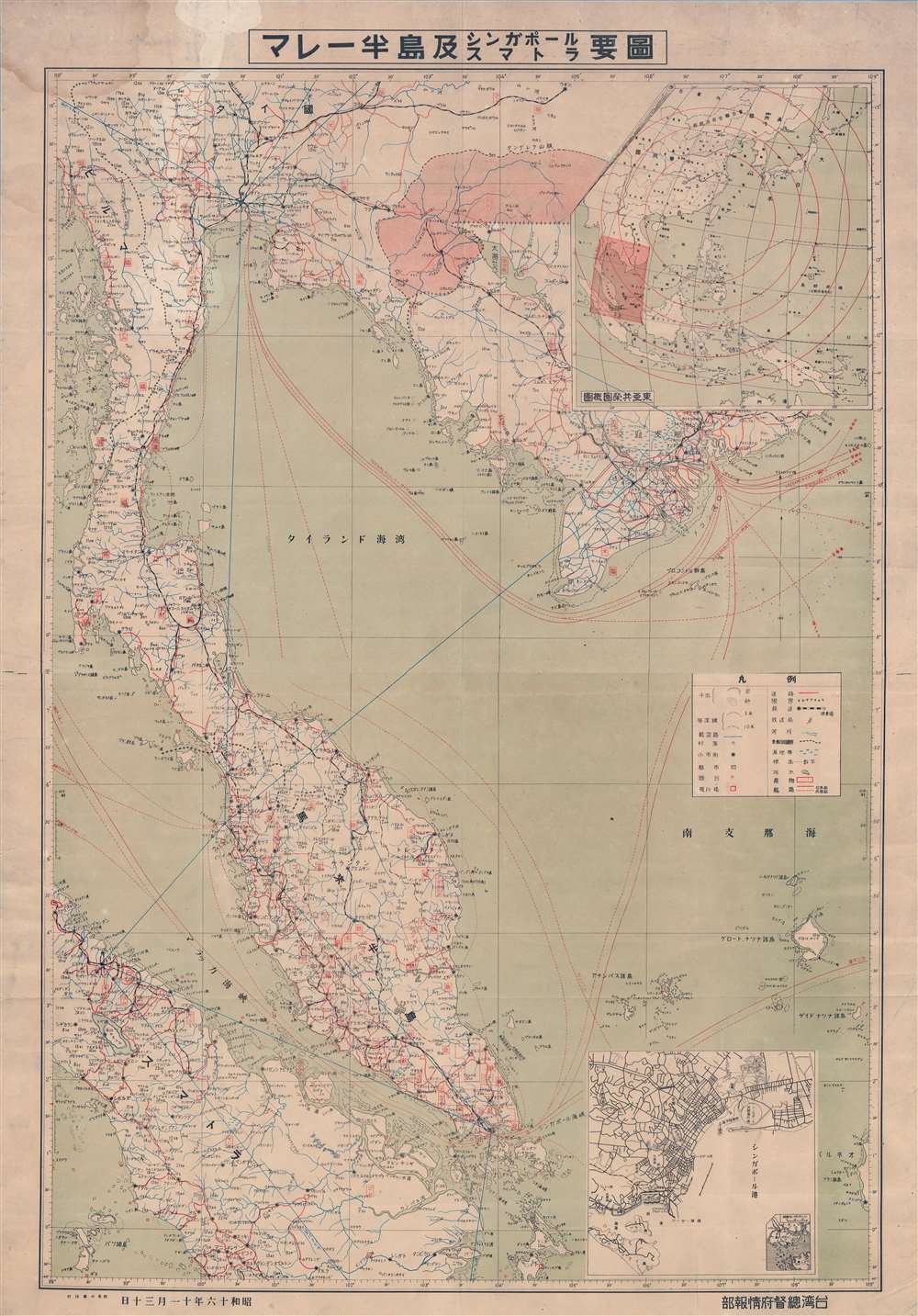 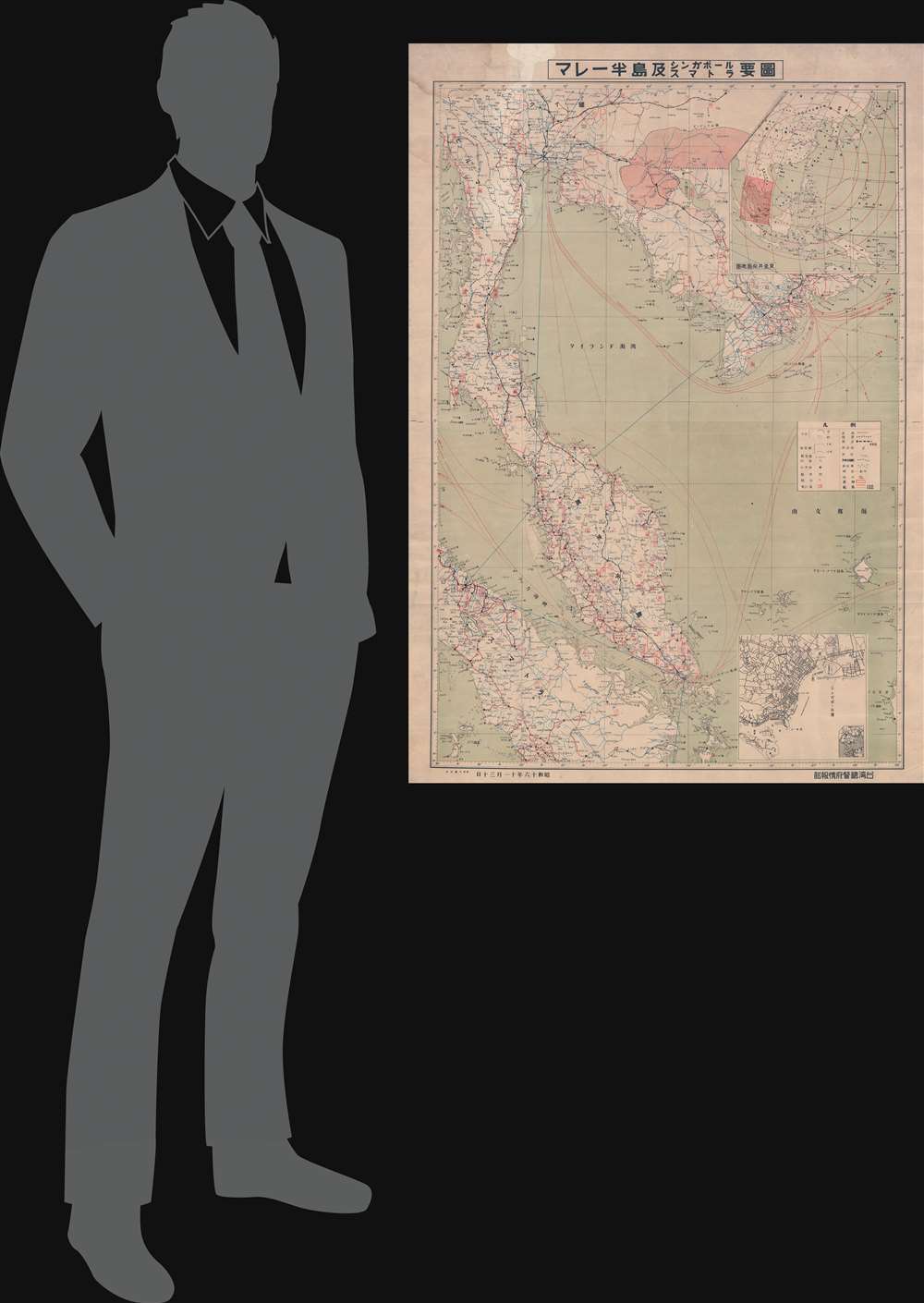 1941 Taiwan Governor Office Map of the Malay, Sumatra, and Singapore

This is a rare 1941 map of the Malay Peninsula, Sumatra, and Singapore, including portions of Thailand, British Burma, and French Indochina, printed in Taiwan for the Information (Intelligence) Department of the colonial Taiwan Governor's Office in Taipei. It was produced on November 30, 1941, less than two weeks before the Japanese invasion of British Malaya that coincided with the bombing of Pearl Harbor on December 7 (December 8 local time). Along with British Malaya and Singapore, the Dutch East Indies (Indonesia), the Philippines, and several other Western colonial possessions were invaded on or shortly after December 8. In the years and decades before this invasion, Taiwan had become an important node of information on 'South Seas' (Nanyō) Affairs, and served as a staging area for the invasion, including an intelligence gathering. The map includes two insets, one at top-right of the Greater East Asia Co-Prosperity Sphere (大東亜共栄圏) with Taiwan at the center and the area represented here shaded in red, and one at bottom-left of Singapore (シンガバール港).

The map extensively notes agricultural, mineral, and other resources such as pepper, sugar, wood, and iron. Japanese interest in Southeast Asia was primarily driven by the scarcity of certain resources in Japan's existing empire, and the desire to build an autarkic sphere (the economic aspect of the Co-Prosperity Sphere) that could sustain a long-term war with the United States and other Western powers. Rubber (ゴム) was a particularly important resource for the Japanese, which the British and Dutch planted extensively on plantations in Malaya and on Sumatra. The map also notes critical infrastructure (roads, railways, bridges, ports, shipping lines), terrain features, waterways, major cities, and international borders. There can be little doubt, then, that this map was prepared for the Taiwan Governor's Office to inform and assist it in preparations for the coming invasion of Malaya, Singapore, and Sumatra.

Japan's invasion of British Malaya is famous in military history for its remarkable speed. As the map shows, only one railway and one or two major roads, depending on the area, ran north to south through the peninsula. The British tried to slow the Japanese advance by blowing bridges and adopting scorched earth tactics, but Japanese preparations (such as pontoon bridges) and speed proved impossible to counteract. Memorably, many Japanese troops had been provided bicycles and were able to quickly and 'silently' move down the Malay Peninsula at a considerable pace. The British, long fearing a naval attack by Japan, built fortifications and defenses in Singapore, making it a 'Gibraltar of the East.' However, they were far less prepared for an invasion from the Malay Peninsula, across the Straits of Johor. The rapid Japanese advance through Malaya, the war in Europe drawing the bulk of British attention, and the sinking of the best British ships in Asia (the Repulse and Prince of Wales) left Singapore ill-prepared for a defense, and the British garrison surrendered on February 15, 1942. The day before, Japanese troops had landed on Sumatra, and had captured the island by the end of March.

The Greater East Asia Co-Prosperity Sphere was an imperial concept created and promulgated for occupied Asian populations from 1940 through 1945 by the Empire of Japan. Announced by Japanese Foreign Minister Hachirō Arita on June 29, 1940, the Co-Prosperity Sphere was intended as a self-sufficient 'bloc of Asian nations led by the Japanese and free of Western powers.' It covered Southeast Asia, Eastern China, Manchuria, Japan, the East Indies, and parts of Oceania. The idea promoted the cultural and economic unity of East Asians, Southeast Asians, and Oceanians with the underpinning assumption that Japan, which had never been conquered and was the only Asian nation to fully modernize, was the 'Light of Asia.'

This map was produced on November 30, 1941 for the Information (Intelligence) Department of the colonial Taiwan Governor's Office 台灣總督府情報部. The only other known copy is held by the National Library Board of Singapore.

OCLC 969679653. Chen Wan-y, A Dictionary of Modern Taiwanese Literature during the Japanese Occupation, (Linking Publishing Co., 2019) [陳萬益, 日治時期台灣現代文學辭典 (聯經出版事業股份有限公司, 2019)], 469. Akashi Yoji, 'The Nanyo Kyokai and British Malaya and Singapore, 1915-45' in Akashi Yoji and Yoshimura Mako (eds.), New Perspectives on the Japanese Occupation in Malaya and Singapore, 1941-1945, (National University of Singapore Press, 2008).
Looking for a high-resolution scan of this?