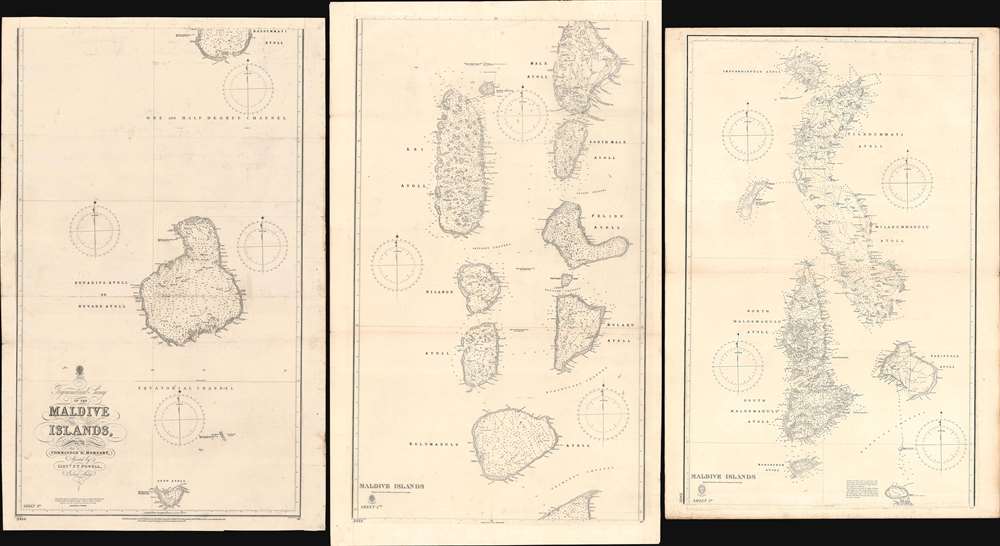 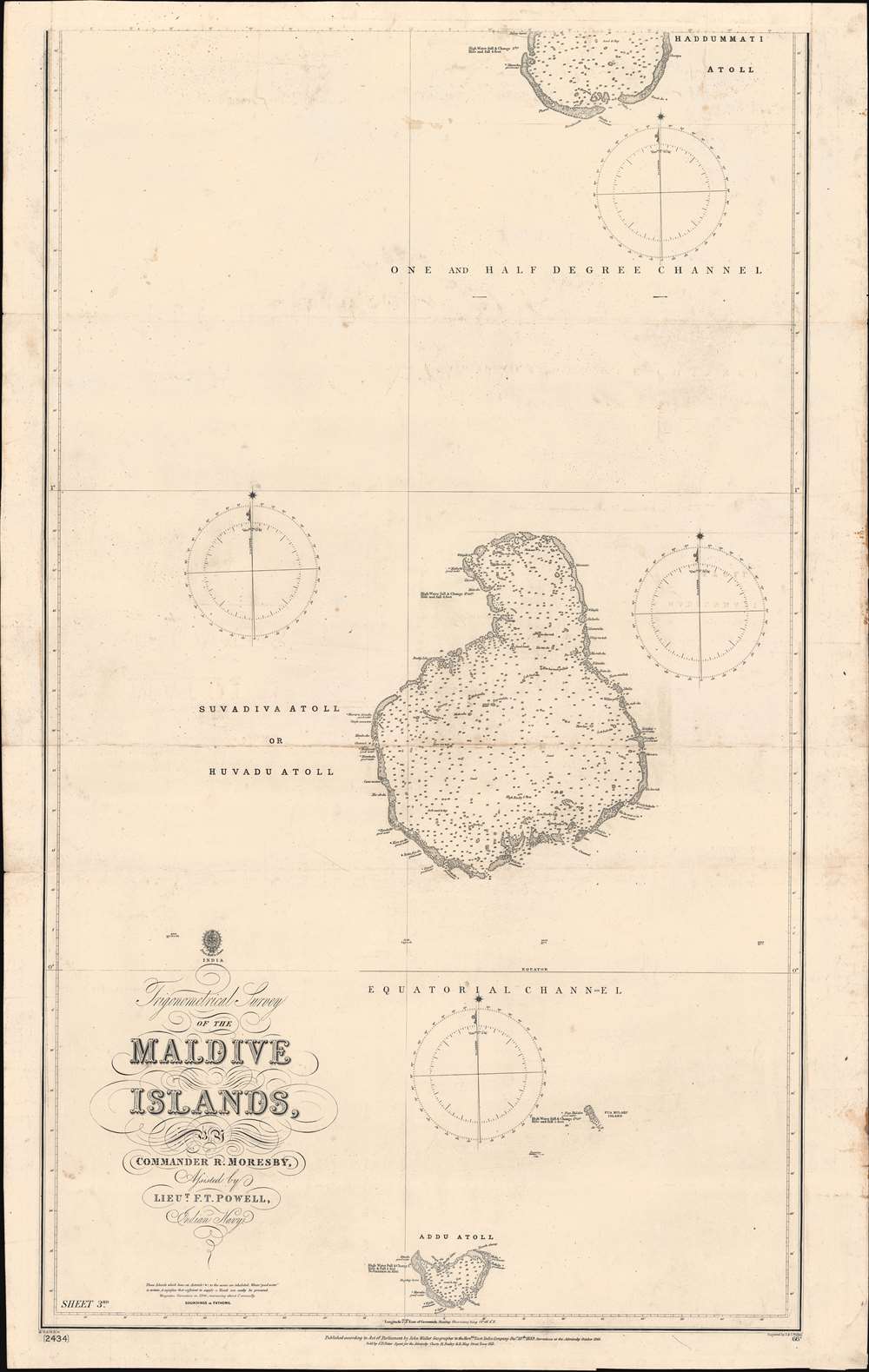 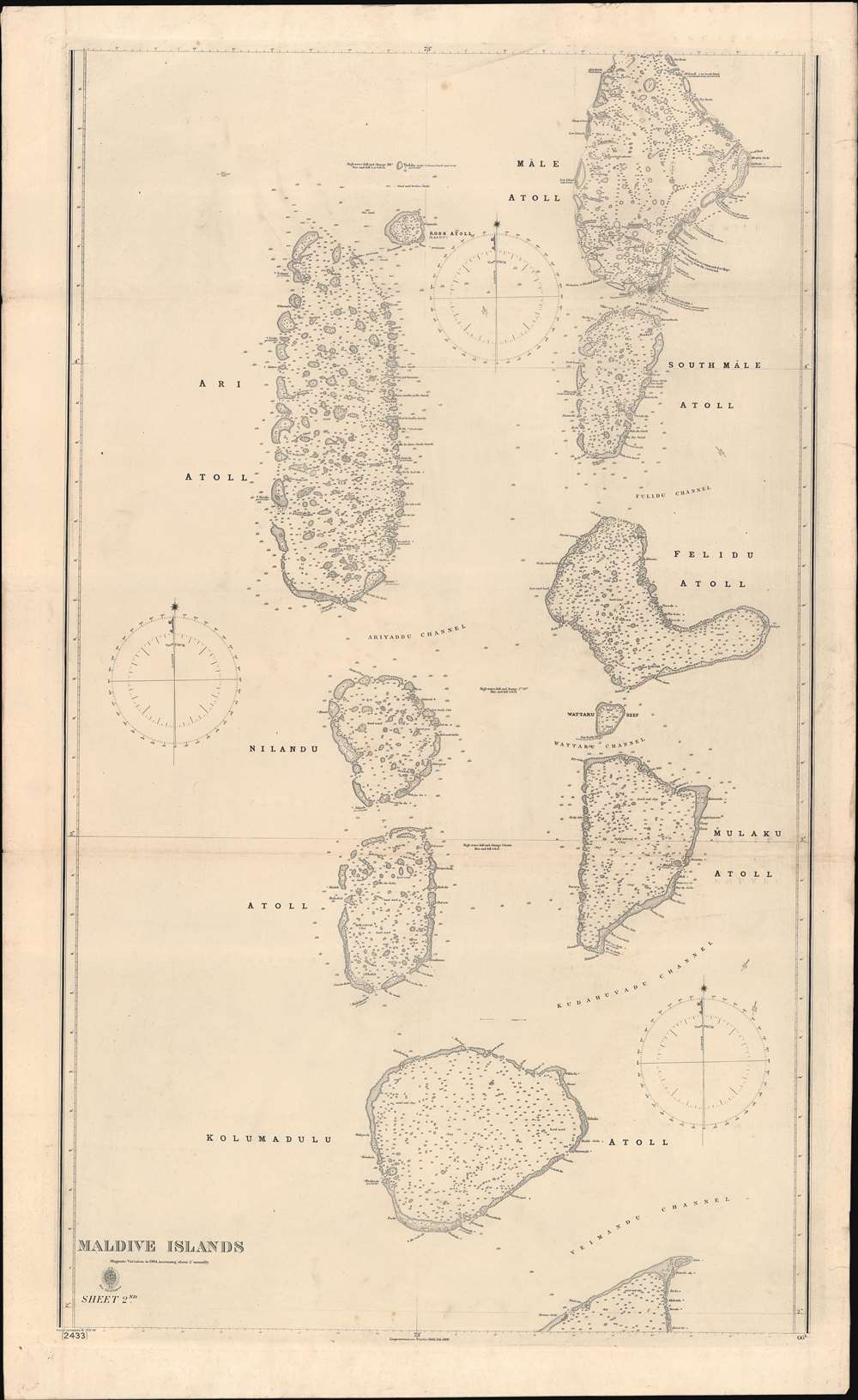 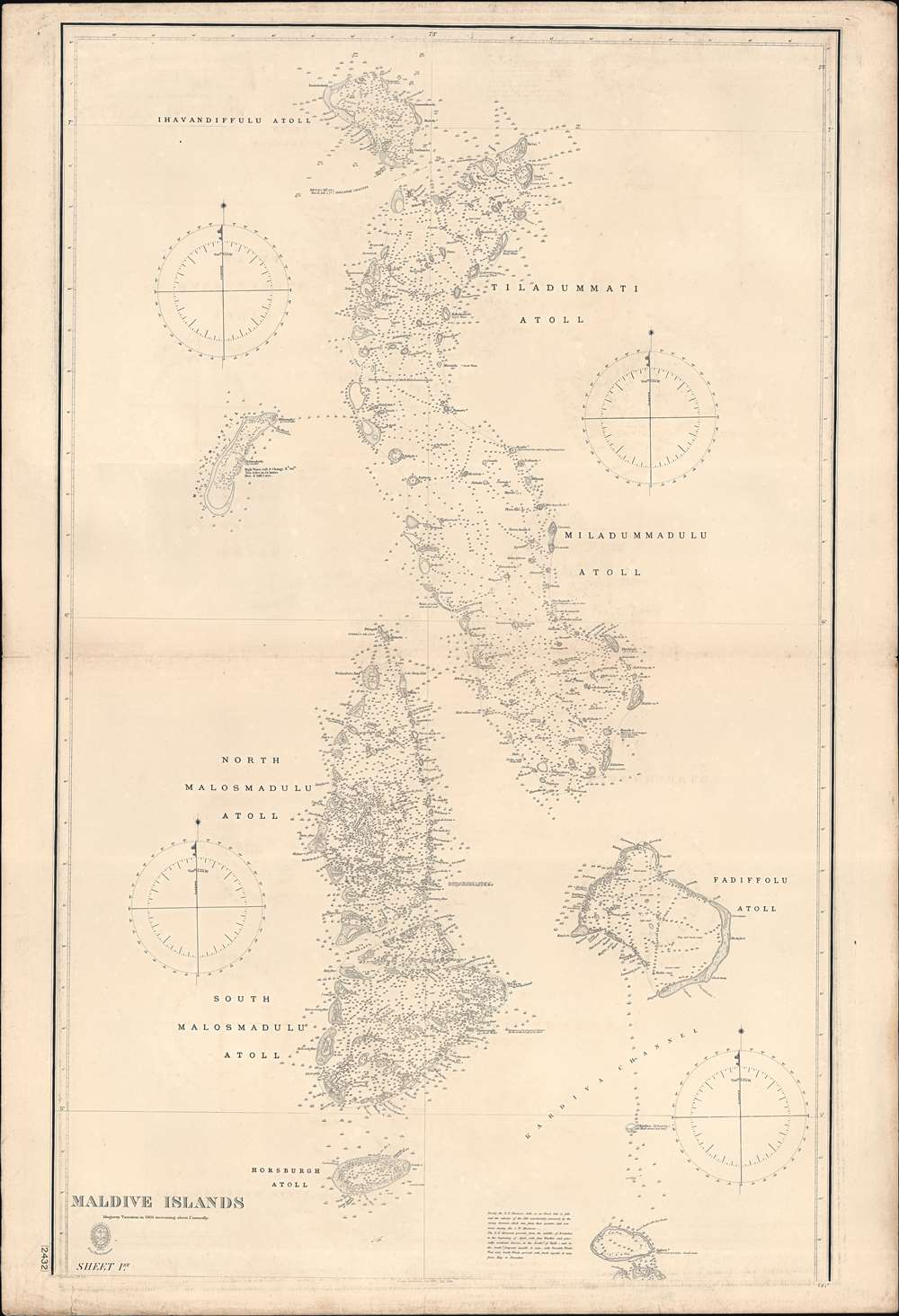 First complete survey of the Maldives.

The largest and most important 1904 chart of the Maldives, compiled by Indian Navy Commander Robert Moresby and Frederick Thomas Powell. The map consists of three joinable panels embracing the Maldive Islands in full, rich with soundings, details about available water supply, tide notes, and a wealth of other practical data for the mariner. This map, the result of meticulous hydrographic work in the mid-19th century, opened the Maldives to steam navigation and was essential to establishing viable steam navigation routes between the Red Sea and the East Indies. It remained the definitive mapping of the Maldives until the 1900s, when it was at last superseded by satellite hydrography. This map also reveals the extent to which the Maldives are at risk form sea-level rise and Global Warming, which is predicted to make the archipelago unhabitable by 2050.

Historical Context and the Moresby Surveys

By the mid-19th century the British Empire, with an expanding economy hungry for raw materials, needed faster communication between its far-flung colonies. The most important of these was India, most easily accessed through the Mediterranean-Red Sea-Indian Ocean Route. Two major developments make this even route significantly faster, first the opening of the Suez Canal in 1869, and second, the rise of steam powered sea navigation. The first efforts to navigate this route via steam power had mixed results, with some ships making it through, while other wrecked on reefs and other hazards rife in those waters. It became immediately apparent that the old methods of relying on local pilots were insufficient and that new, detailed charts were needed. Moresby was dispatched by the Bombay Marine to perform a meticulous hydrographic survey of the Red Sea, a project that lasted from 1829 to 1833. After the Red Sea, the second most important objective was a survey of the Maldives, which sat directly on Indian ocean trade routes and was long-treacherous due to its incredibly complex multiplicity of hidden reefs. Moresby surveyed these, from 1834 - 1836. Moresby's work in the Red Sea and the Maldives made the steam-connection between the Mediterranean practically navigable, opening a new era in the European-Oriental trade.

Moresby in the Maldives

Impressed by his astounding accomplishments in the Red Sea, Moresby was immediately dispatched to the Maldives. Straddling most Indian Ocean trade routes, the Maldives were both a danger to navigation and a potential resource for ships en-route, thus a comprehensive hydrographic chart was critical.

At the time, the Maldives were ruled by the newly ascended monarch Sultan Muhammad Imaaduddeen IV (fl. 1835 - 1882). Imaaduddeen was vehemently opposed to the surveys. For centuries, the complex networks of shoals, atolls, and reefs served as the Maldivian Sultanate's first line of defense, keeping it independent despite its strategic location and powerful neighbors. When Moresby arrived in the Maldivian capital of Malé, he presented a letter from the British governments of Bombay and Ceylon, explaining his intentions and how such a survey would 'facilitate the movements of vessels calling at Male', and thereby increase and broaden the local overseas trade.' The sultan believed the opposite, that the survey would negate his defensive trump card and open up his kingdom to invasion and potential colonization. While not in a position to directly stop Moresby, and thereby set himself up in opposition to the powerful British Empire, he did actively work against the survey team, he did passively obstruct and confusticate as much as possible. Note the annotation at Mále, the capital, 'no supplies procurable.' Moresby was forced to rely on Imaaduddeen's political rivals within the Maldives for logistic support, a tactic that further heighted tensions between the British and the Sultan. Ultimately, Imaaduddeen's fears were well placed, and by 1887 the Maldives were officially recorded as a British Protectorate, with British ministers taking over most of the Sultan's traditional powers.

Despite the unwelcoming conditions, from 1834 and 1836, Moresby and his assistant Lieut. Frederick Thomas Powell completed the survey. The completed surveys were so meticulous and impressive that they were deems worthy of a 'personal inspection' by Queen Victoria. This map, and updated variants were thee go-to for navigating the Maldives until the 1990s, when they were finally superseded by satellite mapping.

A Tragic End for the Maldives

Settlement on the Maldives can be traced to about 500 BC, when the archipelago was settled by the Dheyvi Peoples, from Kalibanga, India. The Maldives was subsequently established as a Hindu then Buddhist Kingdom lasting some 1,400 years. In 1153, the Buddhist King of the Maldives converted to Islam, adopting the Muslim title of Sultan Muhammad al-Adil. The Sultanate of the Maldives lasted until 1932, when it became a constitutional monarchy. The monarchy fully ended by 1969, when the Maldives became a republic.

Through nearly 2500 years of history, the Maldives were an important independent kingdom and stopping point for the Indian Ocean Trade. Today, the archipelago is the world's most at-risk nation from Global Warming. With an average elevation of just 5 meters, it is estimated that sea level rise will make the Maldives uninhabitable by 2050. The government is making some attempts to shore up the larger islands, but this effort will ultimately not save the more than 200 inhabitable islands. Other efforts include purchasing vast tracks of land in India, Sri Lanka, and Australia, where the Maldivian people plan establish a nation in exile.

These charts were engraved by J. and C. Walker and published by John Walker for the East India Company. They were first published in 1839, but soon afterwards were taken over by the British Admiralty and corrected to 1866, when a second edition was issued. Subsequent small corrections followed in 1873 and 1878, 1902, and 1904. The present example shows variance to 1904, although does not feature the 1902 or the 1904 imprint evident on the Harvard example. This map was later coped by other marine organizations, including the French Dépôt des Cartes et Plans de la Marine, but on a much-reduced scale. Collectively these maps represent Admiralty charts 2432, 2433, and 2434. Early examples, as here, are very rare, and even latter issues from the 1940s - 1980s, are uncommon.

Robert Moresby (June 15, 1794 - June 15, 1854) was British Royal Navy and Indian Navy officer and hydrographer. Moresby is most famous for his 1829 - 1833 trigonometrical hydrographic survey of the Red Sea, a seminal work that opened the sea to steam navigation and for which Richard Burton called him 'the Genius of the Red Sea'. Afterwards, from 1834 to 1836 he completed the first complete hydrographic survey of the Maldives - an exceptionally complex region to survey due to its size and the sheer number of coral atolls. He then surveyed the Chagos Archipelago, and the vast submerged reef southeast of the Seychelles. His survey work under often extreme heat conditions, proved hard on his health and by 1839 forced him to give up hydrographic work altogether. After several years of recuperation in India, he returned to the sea in 1842 as captain of the luxurious 'Peninsular and Oriental' steamer, HMS Hindostan. In addition to his survey work, Moresby was also an excellent landscape painter whose artwork record scenes from his many voyages. Learn More...