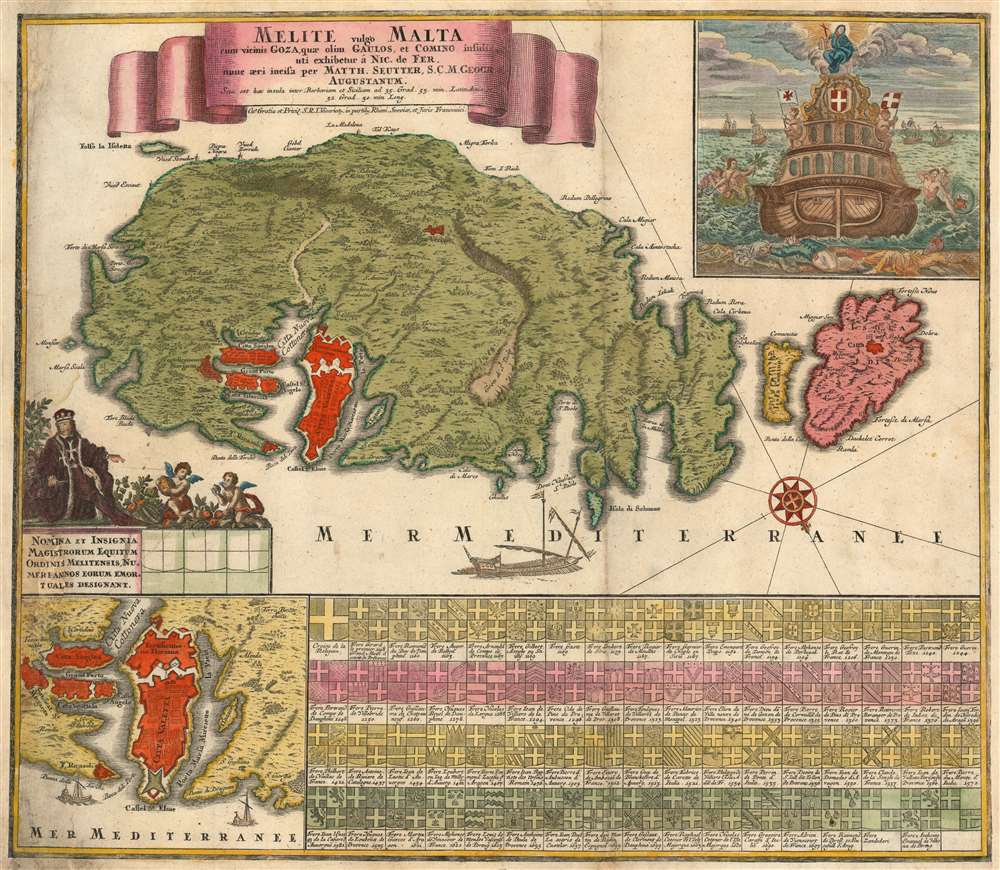 With this dramatic 1730 map of Malta, Gozo and Comino, Matthias Seutter celebrates the Venetian victory over the Ottoman Turks in the 1565 Siege of Malta - an event so momentous that even in the 18th century it remained a signal event in European consciousness. Along the bottom of the map are a series of armorial crests representing Grand Masters of the Order of Knights of the Hospital of Saint John of Jerusalem, commonly known as the Knights Hospitaller or the Order of Saint John, a militant monastic order dating to the Crusades.

The Great Siege of Malta

The Great Siege of Malta took place in 1565 when the Ottoman Empire tried to invade the island of Malta, then held by the Knights Hospitaller. The siege dragged on over the course of four months during a hot summer, resulting in an Ottoman defeat. The numbers of combatants are disputable, varying from 2000 to 6000 on the Venetian side versus 30,000 to 40,000 Ottomans; casualty reports vary nearly as wildly. Nevertheless, an island fortress weathering a siege anywhere within this range would merit celebration. Viewed as a turning point in the long war between Christian Venice and the Muslim Ottoman Turks, the Siege was made throughout Western Europe a cause celebré.

The southern-oriented map (after De Fer's exceedingly rare 1722L'Isle de Malthe,) includes an inset plan of the city and fort of Valleta, and a dramatic view of a Venetian ship sailing triumphantly away, leaving defeated Ottoman sailors floating in its wake. 68 coats of arms of Maltese knights are displayed below. Fortifications on Malta and Gozo are marked boldly in red.

This map was engraved by Matthias Seutter and published in Augsburg based upon earlier cartography prepared by Nicolas de Fer. Various editions of this map appear in perhaps two dozen library collections in OCLC.

Average. Remargined at left with some manuscript reinstatement of image.