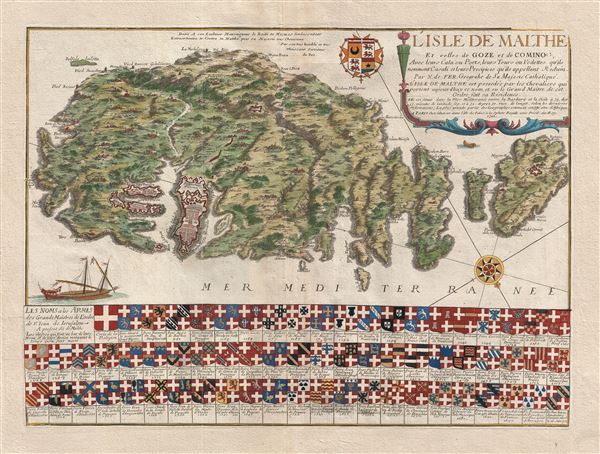 Stunning Malta map showing the armorial crests of the Grand Masters of the Knights Hospitallers of St. John.

A spectacular and scarce 1722 map of Malta by Estienne Vouillemont and Nicolas de Fer. De Fer's map covers all of Malta as well as the adjacent island of Gozo. Throughout the map offers exceptional topographical detail and is, in places, almost view-like. Valetta is presented in exceptional detail with individual streets and architectural structures noted. At the foot of the map three lines of images illustrate the armorial crests of the various grand masters of the Order of St John of the Knights Hospitaller.

This map was originally drawn by Estienne Vouillemont in 1662 and has, in this example been updated and revised by the French map publisher Nicolas de Fer to include Grand Masters up to 1722. The 66 armorial crests cover from the Blessed Gerard (1099-1120), the first Grand Master, to Marcantonio Zondadari (1720-1722), the 64th Grand Master and 22nd in Malta.

The Knights established themselves in Malta shortly after being expelled from Rhodes by Sultan Suleiman the Magnificent in 1523. The Order remained without a territory of its own until 1530, when Grand Master Fra' Philippe de Villiers de l'Isle Adam took possession of the island of Malta. Malta was granted to the Order by Emperor Charles V, Holy Roman Emperor and his mother Queen Joanna of Castile as monarchs of Sicily. In exchange, the Order was required to provide on falcon per annum to Pope Clement VII, which became known as the Tribute of the Maltese Falcon.


Estienne Vouillemont (fl. c. 1650 - C. 1670) was an engraver of maps, plans, and board games active in France in the middle part of the 17th century. He held the official post of 'Graveur Ordinaire du Roy' and held a Writ of Privilege, a kind of early copyright, from the King of France. Learn More...