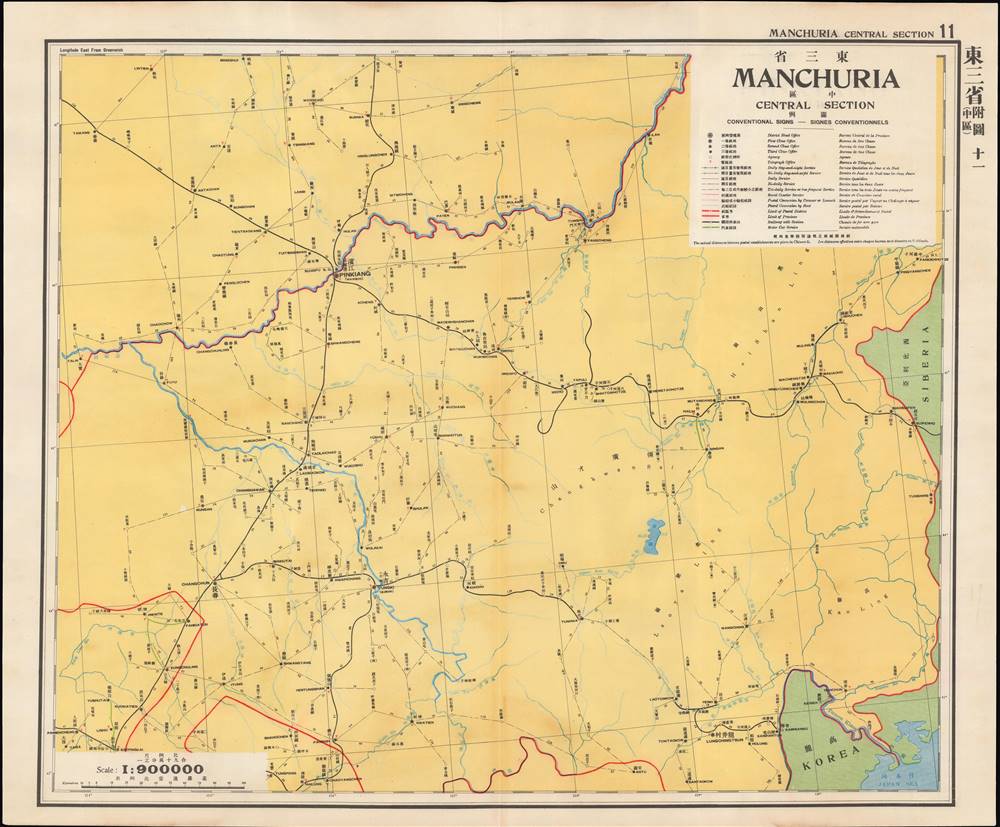 Postal infrastructure as a reflection of China's modernization.
$400.00

This is a map of central Manchuria (portions of Heilongjiang and Jilin Provinces) from the 1933 edition of The Postal Atlas of China (中華郵政輿圖), compiled by Charles Jacot-Guillarmod. It highlights the evolving postal infrastructure of the region, which had been contested between China, Japan, and Russia for decades and had become a de facto Japanese colony with the establishment of the puppet state of Manchukuo the previous year.

This map was made at a time of great upheaval (described below) for the lands illustrated here. As the atlas was published by a wing of the Chinese government, Japanese imperial gains in northeastern China are not recognized, nor are the changes in placenames that followed, such as the renaming of Changchun to Xinjing (新京, 'new capital'). In fact, the map's title uses the somewhat anachronistic title 'Three Eastern Provinces' (東三省), a Qing-era administration that had been expanded with the addition of a fourth province, Rehe (熱河省, often Jehol in foreign sources), in 1928.

Some sense of the openness of the region is given here, even after decades of migration from other parts of China. Infrastructure is minimal, and to the extent that it does exist it is oriented around major rivers and railways. Harbin (here as Pinkiang 濱江), in particular, sprang up in tandem with the railways and the city's culture and economy remained deeply tied to the railway network of Manchuria.

Mantetsu, the Kwantung Army, and Manchuria

The Treaty of Portsmouth that ended the Russo-Japanese War (1904 - 1905) granted to Japan, among other rights, the Kwantung Leased Territory and the southern section of the China Eastern Railway, from Changchun (長春) to Port Arthur (旅順 Lüshun), which became known as the South Manchuria Railway (the northern section between Harbin and Changchun was jointly managed by Russia and China and came to be known as the North Manchuria Railway, 北滿鐵路). The company created to manage the southern section, the South Manchuria Railway Company (Mantetsu), soon developed into a mega-conglomerate that oversaw hotels, mines, mills, power plants, publishing, and much more, expanding Japanese influence in Manchuria to the point that it became a virtual colony. By the 1930s, Mantetsu was the largest company in Japan and by itself formed a significant portion of the Japanese economy.

Although Japan already exercised an informal empire in much of Manchuria, the territory was still under the control of the Fengtian Clique of warlords, led by Zhang Zuolin. Meanwhile, a sizable Japanese garrison occupied the Kwantung Leased Territory, known as the Kwantung Army (or Kantō-gun in Japanese). The Kwantung Army was a hotbed of ultranationalism, militarism, and anti-democratic secret societies, and produced several of Japan's future wartime leaders, including Tōjō Hideki. Although the Kwantung Army had initially supported Zhang Zuolin as a bulwark against Chiang Kai-Shek, who was seen as pro-Communist, he was assassinated soon after Chiang nominally reunified the country in 1928 when a bomb exploded under his private train traveling on the South Manchuria Railway. The plot had been hatched by junior officers in the Kwantung Army.

Three years later, on September 18, 1931, a group of Kwantung Army officers staged a false flag incident (another bombing along the South Manchuria Railway) to provide a pretext for invading and occupying Manchuria. Although Japan's political leaders and likely even the military leadership were unaware of the invasion plot, they did not force the Kwantung Army to retreat despite international condemnation because the invasion was extremely popular domestically and was a convenient solution to Japan's long-term problems with resource constraints and overpopulation.

Rather than make Manchuria a formal colony, as with Taiwan, or annex it outright, as with Korea, a puppet regime was established, led by the last emperor of the Qing Dynasty, Aisin Gioro Puyi, who had been living in the Japanese Concession in Tianjin. Puyi had expressed his desire to be re-enthroned and had support from the now-minority population of Manchus, who felt discriminated against in China since the Qing Dynasty's collapse in 1912. After being denounced as a traitor by the Chinese government, Puyi was smuggled out of Tianjin in the trunk of a car and conveyed to Manchuria, where he became the nominal head of the new state.

A vast, sparsely populated region that was tremendously rich in resources, Manchuria became a wild, violent, multiethnic imperial frontier. Forced labor was employed on a mass scale under brutal conditions. All manner of warlord troops, bandits, and rebels were present in Manchuria following Japan's invasion, and extremely harsh methods were used to suppress resistance. A special military unit (Unit 731) even engaged in horrific experiments on living subjects (often captured rebels and enemy troops, though also randomly selected civilians), such as biological weapons, chemical warfare, and vivisection.

Despite the creation of a government led by Manchus and other non-Han ethnic groups, real power rested with Japanese military officers, bureaucrats, and the South Manchuria Railway. After the establishment of Manchukuo, Mantetsu was expanded to become the Manchukuo National Railway (滿洲國有鐵道). Since it was in a compromised position and difficult to administer, the Soviets relinquished their claim on the section between Harbin and Changchun (renamed Xinjing, as capital of Manchukuo) after considerable pressure in 1934. Afterwards, the National Railway quickly changed the gauge on the Harbin-Xinjing section (the North Manchuria Railway), from the wide 1,520mm Russian gauge to the standard 1,435mm gauge used elsewhere in Manchukuo.

Manchukuo quickly became a steppingstone to further Japanese aggression throughout China, just as Korea had been a steppingstone to Manchuria. In the end, rather than being a showcase of rapid industrialization and a beacon of Japan's agenda of progress for Asia, or a bastion for the beleaguered Manchus and other non-Han ethnicities, Manchukuo instead became the archetype for the false promises and cruelty of Japanese imperialism.

Very good. Some discoloration along central fold line and at top and bottom margins.