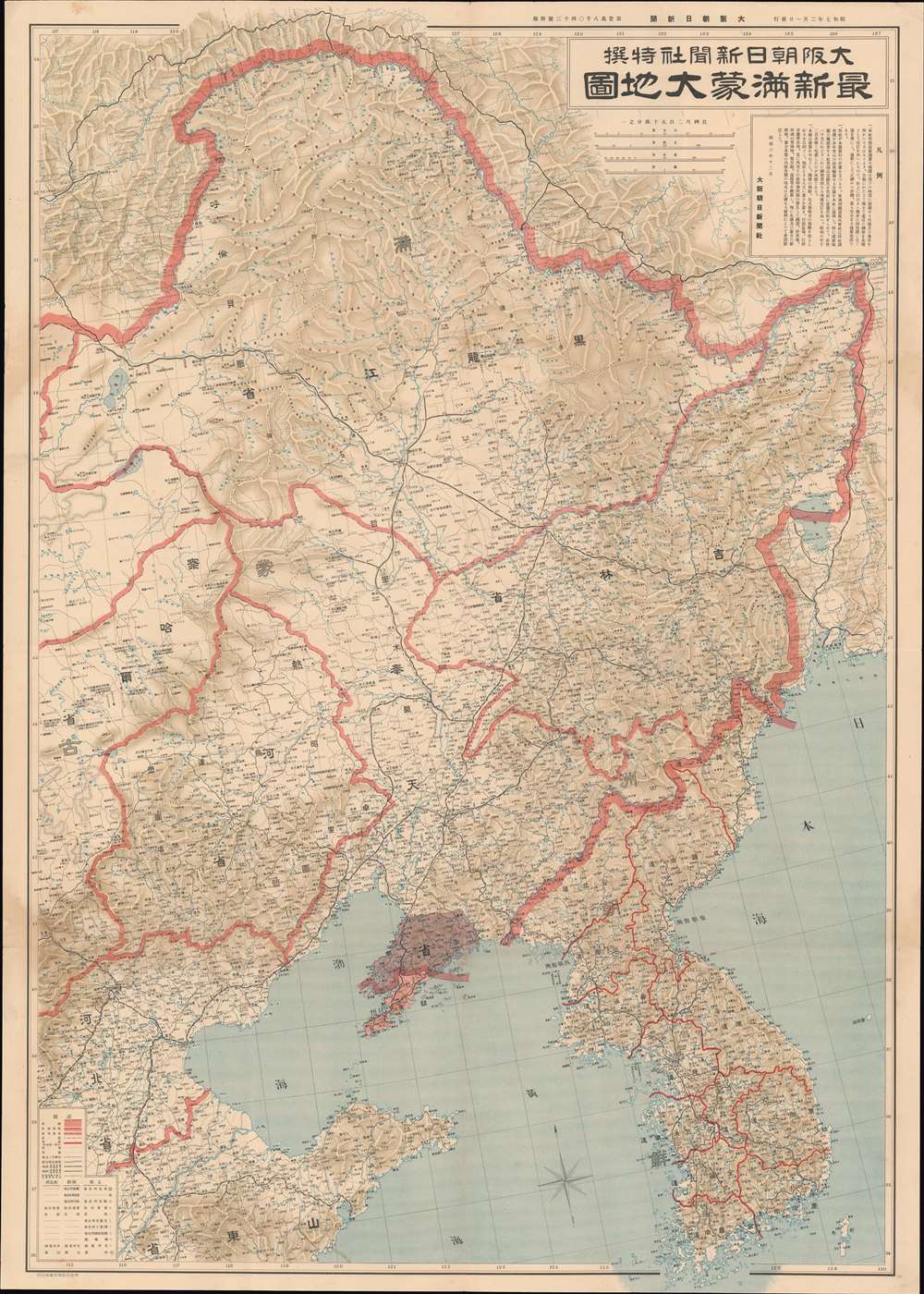 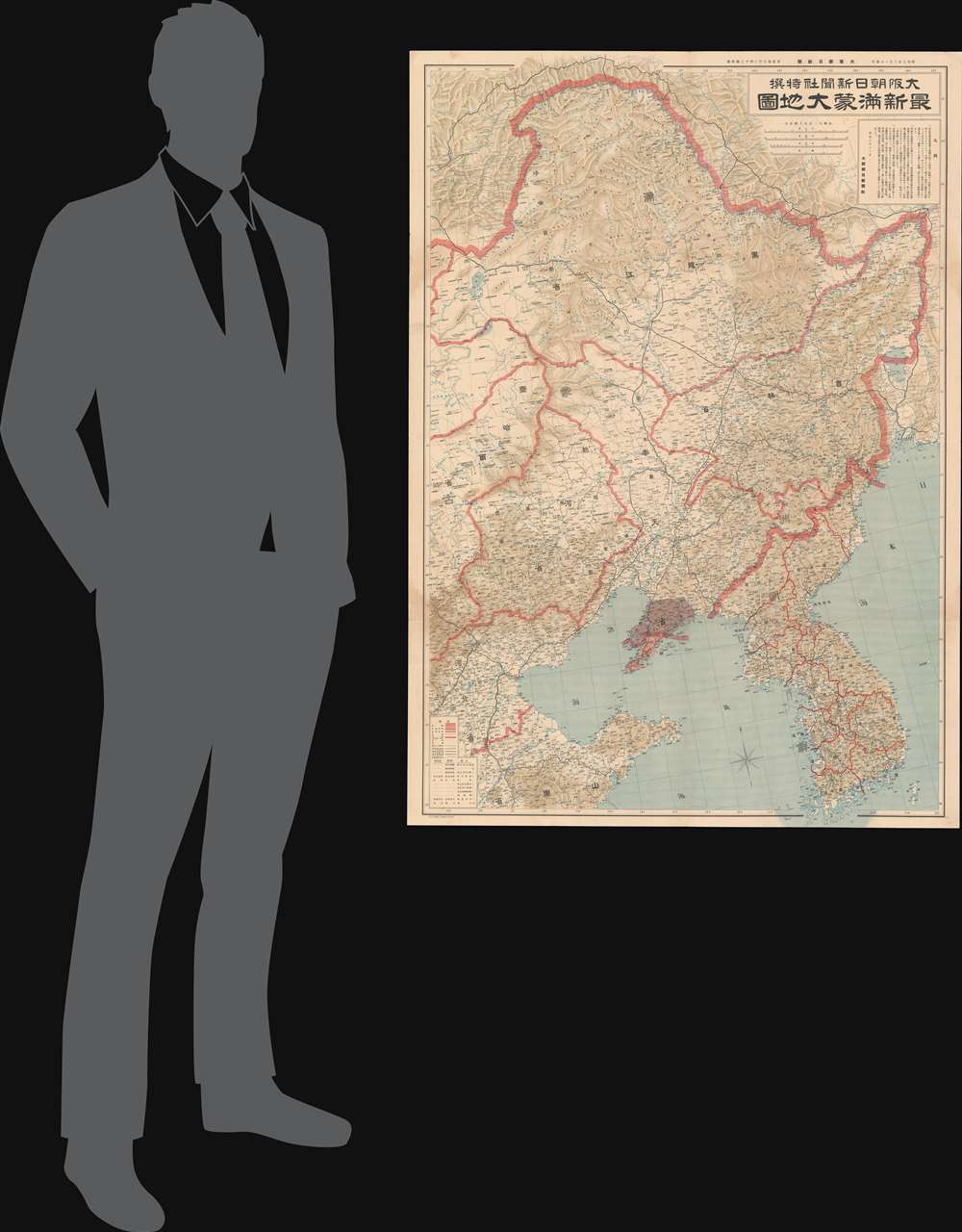 Manchukuo, just prior to its formal establishment.

This is a rare 1932 map of Manchuria, including parts of Mongolia and northern China, published in the Osaka Asahi Shimbun (大阪朝日新聞) to mark the founding of the Japanese puppet state of Manchukuo. Japan's de facto colony was massive, more than double the land area of the Japanese home islands, and served as a frontier rich in resources and opportunity for the land scarce, resource-starved, overpopulated home islands. Therefore, this map was meant to familiarize the readers with this vast new territory but also advertise it as a destination for capital and settlers.

This map is remarkable for its painstaking level of detail. The process of producing it is explained in the box at top-right. The Osaka Asahi explains that they attempted to be as accurate and up to date as possible, resolving discrepancies between existing maps and carrying out thorough investigations. The news agency acknowledged that this map is based on a map made by the South Manchuria Railway Company (南滿洲鐵道󠄁株式會社, Mantetsu for short, discussed below), which had undertaken painstaking work to build geographic knowledge of the region. The revision and improvement of the Mantetsu map was completed in October 1931 (just after the Mukden Incident).

The legend at bottom-left includes symbols for administrative divisions, communications and transportation, and a table showing different terms for comparable administrative units in Korea, China, and Siberia. Notably, the areas (banners) under the control of different ranks of Mongol princes and officials are indicated. Four scales are included, for Japanese ri, Chinese li, kilometers, and Russian versta.

Manchuria was the homeland of the Manchus, the founders of the Qing Dynasty that ruled China for nearly 300 years from the 17th – early 20th century. Keen to protect their ancestral homeland and distinct identity amid a much larger Chinese population, but also eager to avoid unrest in the Chinese interior, the Qing at first reluctantly tolerated and then openly allowed Chinese migration to Manchuria in the 19th century, completely altering the demographics of the region. Moreover, in the last years of the dynasty, Russia and Japan vied for influence in Korea and Manchuria, resulting a series of concessions, including the China Eastern Railway, the South Manchuria Railway, and the Kwantung Leased Territory (關東州, in red towards bottom-center, with neutral zone in purple above). By the end of the Qing, Chinese sovereignty over Manchuria was deeply compromised. After the fall of the Qing, the region was ruled by a powerful group of warlords known as the Fengtian Clique.In Mongolia, since many Mongol tribes had allied with the Qing in the 17th century, they were able to maintain their autonomy for much of the Qing era and serve throughout the empire as soldiers and officials. However, just as with Manchuria, overpopulation and natural disasters in the Chinese interior sent migrants and refugees streaming to the Mongolian frontier in the 18th and 19th century. Convicts were also often exiled to Mongolia as a form of punishment. The Qing initially tried to limit migration but later encouraged it in Inner Mongolia, where the Mongols quickly became a minority in their own land. When the Qing collapsed, the new Chinese Republic claimed Outer Mongolia as Chinese territory, leading Mongolian nobles to seek foreign assistance wherever they could, aligning first with White Russians and then the Soviets, resulting in the establishment of the Mongolian People's Republic. In Inner Mongolia, residual bitterness about being forcibly incorporated into China led a group of Mongolian nobles to ally with Imperial Japan in the 1930s, forming the puppet state of Mengjiang.

Mantetsu, the Kwantung Army, and Manchuria

The Treaty of Portsmouth that ended the Russo-Japanese War (1904 - 1905) granted to Japan, among other rights, the Kwantung Leased Territory and the southern section of the China Eastern Railway, from Changchun (長春) to Port Arthur (旅順 Lüshun), which became known as the South Manchuria Railway. The company created to manage the southern section, the South Manchuria Railway Company (Mantetsu), soon developed into a mega-conglomerate, akin to the chartered corporations of early modern European colonial empires. The company oversaw hotels, mines, mills, power plants, publishing, and much more, that expanded Japanese influence in Manchuria to the point that it became a virtual colony. By the 1930s, Mantetsu was the largest company in Japan and by itself formed a significant portion of the Japanese economy.

Although Japan already exercised an informal empire in much of Manchuria, the territory was still under the control of the Fengtian Clique, led by Zhang Zuolin. Meanwhile, a sizable Japanese garrison occupied the Kwantung Leased Territory, known as the Kwantung Army (or Kantō-gun in Japanese). The Kwantung Army was a hotbed of ultranationalism, militarism, and anti-democratic secret societies, and produced several of Japan's future wartime leaders, including Tōjō Hideki. Although the Kwantung Army had initially supported Zhang Zuolin as a bulwark against Chiang Kai-Shek, who was seen as pro-Communist, he was assassinated in 1928 when a bomb exploded under his private train while it was traveling on the South Manchuria Railway. The plot had been hatched by junior officers in the Kwantung Army.

Three years later, on September 18, 1931, a group of Kwantung Army officers staged a false flag incident (another bombing along the South Manchuria Railway) to provide a pretext for invading and occupying Manchuria. Although Japan's political leaders and likely even the military leadership was unaware of the invasion plot, they did not force the Kwantung Army to retreat despite international condemnation because the invasion was extremely popular domestically and was a convenient solution to Japan's long-term problems with resource constraints and overpopulation.

Rather than make Manchuria a formal colony, as with Taiwan, or annex it outright, as with Korea, a puppet regime was established, led by the last emperor of the Qing Dynasty, Aisin Gioro Puyi, who had been living in the Japanese Concession in Tianjin. Puyi had expressed his desire to be re-enthroned and had support from the now-minority population of Manchus, who felt discriminated against in China since the Qing Dynasty's collapse in 1912. After being denounced as a traitor by the Chinese government, Puyi was smuggled out of Tianjin in the trunk of a car and conveyed to Manchuria, where he became the nominal head of the new state.

A vast, sparsely populated region that was tremendously rich in resources, Manchuria became a wild, violent, multiethnic imperial frontier. Forced labor was employed on a mass scale under brutal conditions. All manner of warlord troops, bandits, and rebels were present in Manchuria following Japan's invasion, and extremely harsh methods were used to suppress resistance. A special military unit (Unit 731) even engaged in horrific experiments on living subjects (often captured rebels and enemy troops, though also randomly selected civilians), such as biological weapons, chemical warfare, and vivisection.

Despite the creation of a government led by Manchus and other non-Han ethnic groups, real power rested with Japanese military officers, bureaucrats, and the South Manchuria Railway. Manchukuo quickly became a steppingstone to further Japanese aggression throughout China, just as Korea had been a steppingstone to Manchuria. In the end, rather than being a showcase of rapid industrialization and a beacon of Japan's agenda of progress for Asia, or a bastion for the beleaguered Manchus and other non-Han ethnicities, Manchukuo instead became the archetype for the false promises and cruelty of Japanese imperialism.

This map was published on February 1, 1932 (Showa 7), a few weeks before Manchukuo's formal founding, as an addendum to the Osaka Asahi Shimbun (大阪朝日新聞). It was printed by the Seiban Printing Co. (精版印刷株式會社). This map is held by Cornell University, the British Library, and the National Library Board of Singapore. As the Mukden Incident and its fallout were a major news item in Japan throughout late 1931 and early 1932, other maps with the same title were published in the same year, but they were not published by the Osaka Asahi Shimbun and seemingly have no relation to this map, though they may also have been based on a preexisting Mantetsu map.