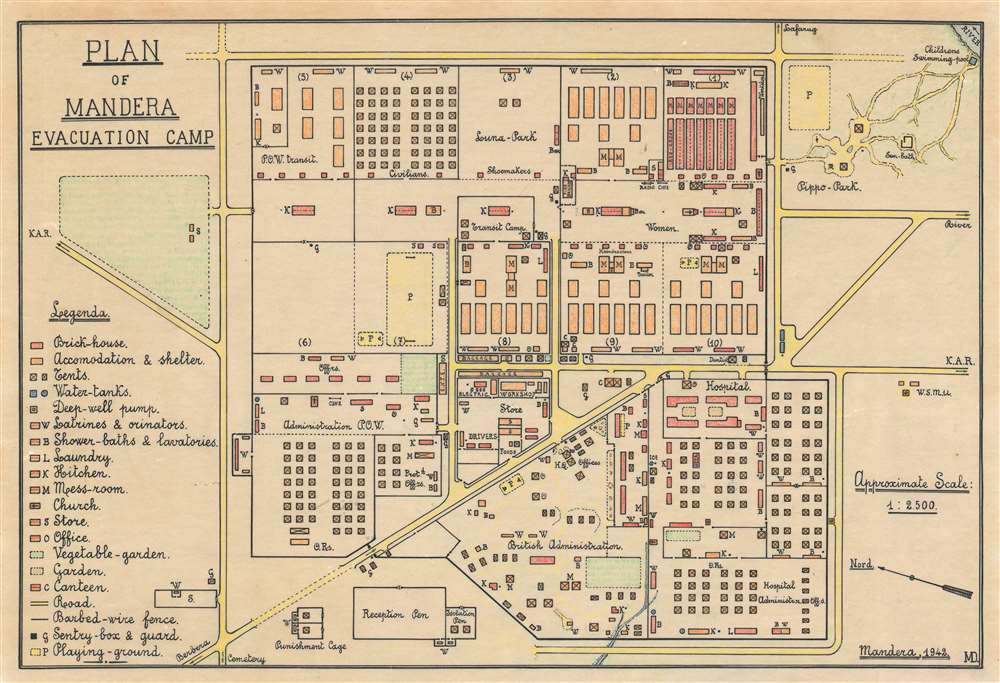 A manuscript map of a POW camp for Italian prisoners in East Africa during World War II.

A once-in-a-lifetime discovery, this is a 1942 manuscript map of the Mandera Evacuation Camp in British Somaliland (modern-day northwestern Somalia) drawn by  Dino Memmo, an Italian military engineer who was tasked by the British to organize the Mandera. The Mandera Camp was created by the British to house Italian POWs and civilian internees during and after the British campaign in Italian East Africa. Despite the harsh conditions, the existence of the camps remains little more than a side note in history - here illustrated perhaps for the only time.

Details on the Map

The map's creator, Dino Memmo, employed a meticulous color-coding system to help differentiate between the various buildings illustrated throughout and included a 'Legenda' along the left border to explain each color. Some buildings are identified solely by color, while others are also identified with an alphabetic label. Certain special buildings are explicitly labeled, such as the Red Cross, hairdresser, dentist, and shoemaker. Some areas, such as the hospital, officer's quarters, workshops, store, and administration sections are also labeled. Luna-Park (the 'Town Square') and Pippo-Park are named, with the Children's Swimming Pool and the sun-bath included in Pippo-Park. More ominously, the Reception Pen, Isolation Pen, and Punishment Cage are identified in the lower left, outside the main camp's barbed-wire fence.

East Africa was already embroiled in conflict before World War II officially began. Italy launched the Second Ital-Ethiopian War on October 3, 1935 and defeated Ethiopia, allowing Italian dictator Benito Mussolini to establish Italian East Africa (Africa Orientale Italiana or AOI) in 1936, which consisted of Eritrea and Italian Somaliland, which had been Italian colonies since 1890, and partially conquered Ethiopia. The AOI now covered nearly all of the Horn of Africa, except for British Somaliland and French Somaliland.

After Nazi Germany invaded France in June 1940 and steamrolled its way across Western Europe, Mussolini could not resist demanding a piece of the pie and on June 10, declared war on Britain and France, officially joining the Axis. This led to an Italian invasion of both British and French Somaliland, which were then annexed to the AOI. After two swift victories, and the French armistice, Italian planners believed that a British counteroffensive would not be possible until 1942, when, in fact, British forces began attacking the AOI in early 1941, launching offensives from multiple different directions. Addis Ababa, the capital of the AOI, was captured by Allied forces on April 6, 1941. Italian forces in East Africa surrendered in January 1942. This victory left the British in control of the Horn of Africa, and, more importantly in the context of this map, tens of thousands of Italian prisoners, although a guerrilla campaign would rage until the Italian armistice in 1943.

As Britain continued to string together victories over Italian forces in East Africa, they gained not only territory, but captured Italian soldiers and civilians. Plus, as guerrilla attacks became more prevalent, British officials came to see Italian civilians as a security threat. To address these problems, British officials decided to house Italian prisoners in special 'evacuation' camps. Quickly built and poorly constructed, most of the camps were built along the Dire Dawa-Hargeisa-Berbera Road, one of the few decent roads in the region, which connected the Allied military base at Berbera to the region's main port. Located seventy-two kilometers southwest of Berbera, the Mandera Evacuation Camp was situated about halfway along the route to Hargeisa.

By World War II, Mandera was already associated with suffering. During World War I, British forces marched 600 German POWs from Dar es Salaam towards Berbera but, due to a lack of provisions, abandoned the Germans at Mandera. Even though they were abandoned in a completely desolate part of the world, the Germans managed to dig wells and build mud-brick huts. Only a few survived their ordeal to return to Europe and tell their stories of the 'Hell that is Mandera'. Hundreds, and then thousands, of Italian prisoners of war and civilian internees were housed under similar circumstances by the summer of 1941. These prisoners were supplied with tents, a small number of tools, and meagre rations. Conditions here were described as horrendous, even by the standards of internment camps in Africa.

Somehow, Italian prisoners at Mandera were able to lodge a complaint with the Red Cross, much to the embarrassment of the British. This led to an immediate improvement of the facilities and living conditions, including better food and the construction of latrines, living quarters, and kitchens. By December 1941, civilian administrators replaced military wardens, a change which led to even more improvements. The British continued to pour resources into Mandera, leading to the layout of the camp as it is seen here. A permanent Red Cross detachment made up of Italian (Anti-Fascist) doctors and nurses was installed at the camp, which improved health care access. By mid-1942, however, the British had realized that maintaining large prison camps in rural Ethiopia and Somaliland created more difficulties than their value. The majority of prisoners were soon distributed to camps in other parts of the Empire, including Kenya, Uganda, South Africa, and India. After Italy surrendered in late 1943, even though the war still raged in northern and central Italy, British officials elected to repatriate non-combatant internees to southern Italy. By the end of World War II, Mandera was home to only the most hardened Italian military and criminal prisoners, who would be processed and repatriated after the end of the war.

This map was created by Dino Memmo, an Italian military engineer who was tasked by the British to organize the Mandera, who signed this map 'MD' in 1942. This is the only known example.

Very good. Manuscript. Blank on verso.
Looking for a high-resolution scan of this?