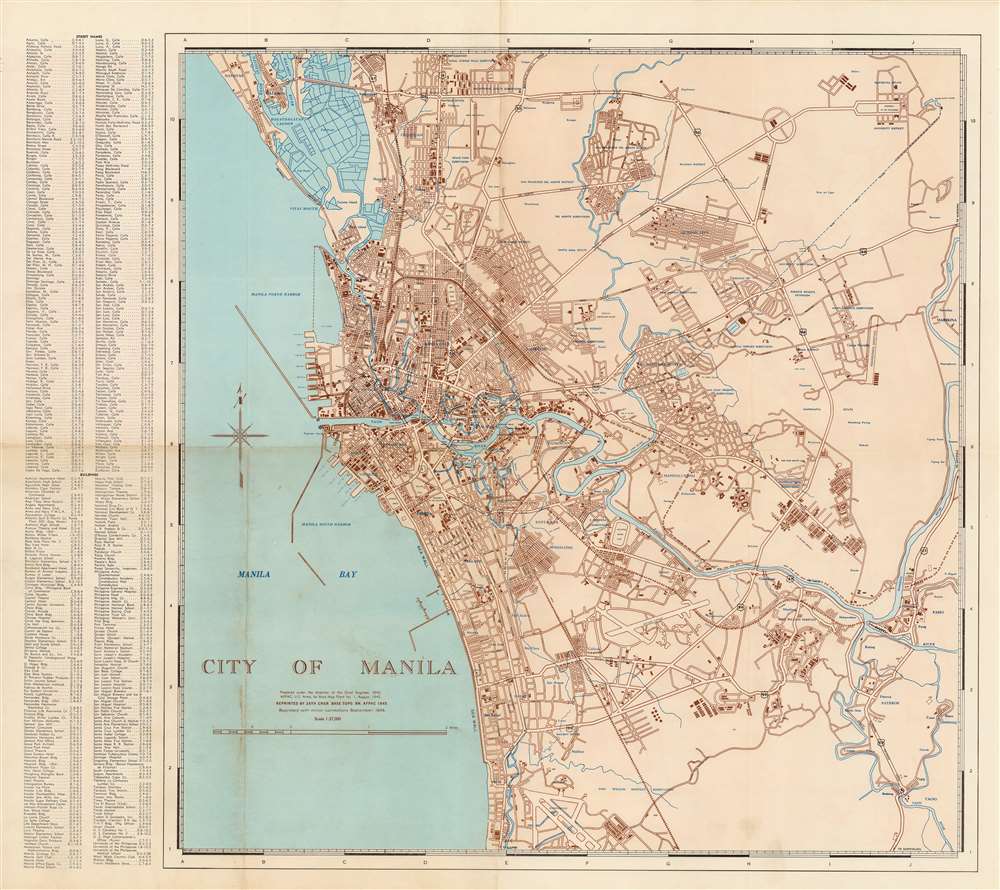 This is a September 1945 U.S. Army Forces, Pacific (AFPAC) city plan or map of Manila, Philippines. It lists important streets and sites in the capital city, which had just been obliterated by an intense battle between American and Japanese forces, one of the forgotten urban conflicts of the Second World War.

Important streets and buildings, including U.S. military facilities, schools, churches, shops, and businesses, are identified in an index situated in the lower left. Districts within Manila are labeled in blue, along with rivers, lagoons, and locations around the city. Major streets are identified, but most smaller streets are only illustrated.

Among the great forgotten tragedies of the Second World War, the Battle of Manila in February and early March 1945 was one of the last large land engagements of the war and a humanitarian disaster. Over 100,000 civilians were killed as both sides were indiscriminate in their use of heavy weapons while Japanese troops committed massacres of civilians before retreating. The participation of Filipinos, who had sided with either the Japanese or Americans and been engaged in a civil war during the Japanese occupation, added to the intensity and ruthlessness of the battle. Unlike in early 1942, when the Americans retreated from Manila (save Corregidor Island), the city was almost completely destroyed, an event largely forgotten by history, unlike European and even Japanese cities destroyed in the war.

American Imperialism and Moves towards Independence

By the early 19th century, the Spanish colonial system that functioned for three centuries on the Philippines began to break down and the Spanish employed increasingly harsh methods to suppress independence. These developments intersected with the 1898 Spanish-American War, when Americans backed the Emilio Aguinaldo (1869 - 1964) independence faction.

At the conclusion of the Spanish-American War, the Philippines were granted to the U.S. and American troops occupied Manila. Tensions grew between U.S. forces and the indigenous revolutionaries, who were unhappy to have been passed from one colonizer to another. Conflict broke out in February 1899, with Emilio Aguinaldo leading the revolutionaries against his former backers. After three years of intense conflict, often combined with atrocities against civilians, most of the rebels were captured or suppressed, though some continued to fight for another decade.

Although under the administration of an American Governor-General, the Philippines was given a degree of autonomy and for the first half of the twentieth century a complex interchange between Filipino elites, American colonial bureaucrats, and Washington D.C. moved incrementally towards independence with the goal of maintaining a strong U.S. presence (contra Japan) and the existing social order on the archipelago. In 1935, the Philippines became a semi-autonomous Commonwealth with a plan to become fully independent in ten years, a process interrupted by the Second World War and Japanese occupation.

Japan's Occupation of the Philippines

Japan's invasion and conquest of the Philippines was one of the worst defeats in American military history. Coming on the heels of the Pearl Harbor attack and other Japanese advances, it was a major blow to U.S. morale. For weeks, a contingent of American and Filipino troops held out and resisted at Corregidor Island in Manila Bay (beyond the scope of this map) to cover the retreat of a larger force, but with no hope of relief the island was eventually surrendered. The survivors were subject to the Bataan Death March, perhaps the worst committed against U.S. prisoners of war (P.O.W.s) during the conflict (though it is often forgotten that far more Filipino than American P.O.W.s died during the march).

Among Filipinos, some welcomed Japan's rhetoric of Asian unity and liberation from foreign control; a puppet government was established and outreach efforts were made to quickly expand Japanese influence, such as free Japanese-language classes. However, Japan's occupation was effectively a military dictatorship, more interested in labor and resources than pan-Asian unity and cooperation. Guerilla units operated in the countryside throughout the war, including Communist-aligned peasant rebels known as Huks, who remained as a domestic insurgent force similar to the Viet Cong after the war ended. With rebels controlling much of the countryside and the tide shifting rapidly against them after a string of losses in the Pacific, Japan's loss of the Philippines was a matter of time by early 1944.

In October, Gen. MacArthur led an amphibious invasion, and a combined U.S.-Filipino force gradually liberated the islands. Still, Japanese troops under the command of Yamashita Tomoyuki, one of Japan's best commanders, who had captured Malaya and Singapore at the start of the war, held out as long as possible and made the Battle for Manila especially costly for Allied troops. After the war, Yamashita was tried and executed for war crimes committed by his troops during the Philippines Campaign, including the killing of American P.O.W.s.

This map was created and printed by the 29th Engineer Base Topographic Battalion of the U.S. Army Corps of Engineers in September 1945. It appears that at least two previous editions had been printed by AFPAC before the present edition. An OCLC reference exists for a map of the same title, although the only publication information date given is the first one printed on this map, 1 August 1945. The OCLC reference also states that thirteen libraries hold examples of seven different editions. Unfortunately, these have not been uniformly digitized, so we are unable to say with any certainty how many examples of the September 1945 printing are referenced here.

U.S. Army Forces, Pacific (AFPAC; 1945-46) under the command of Gen. Douglas MacArthur was the contingent of the U.S. Army created in April 1945, splitting off from the earlier South West Pacific Area command, also under MacArthur. Before the atomic bombings and Japan's surrender, it was anticipated that the troops necessary for an invasion of Japan would necessitate additional command structures. In the event, the new command primarily focused on occupation, disarmament, and reconstruction operations. Learn More...


29th Engineering Battalion (1917 – 2007), known as the Wayfinders, are a unit of the U.S. Army Corps of Engineers tasked with topographic surveying. Formed during World War I, the 29th Engineering Regiment (later Battalion) conducted surveying for the proposed Nicaragua Canal. In the mid-20th century, when the U.S. military was producing maps at a tremendous pace, it was involved with the great undertaking of mapping the world's potential and real battlefields. The Battalion was distinct from but closely related to the Army Map Service and the U.S. Geological Survey. Learn More...