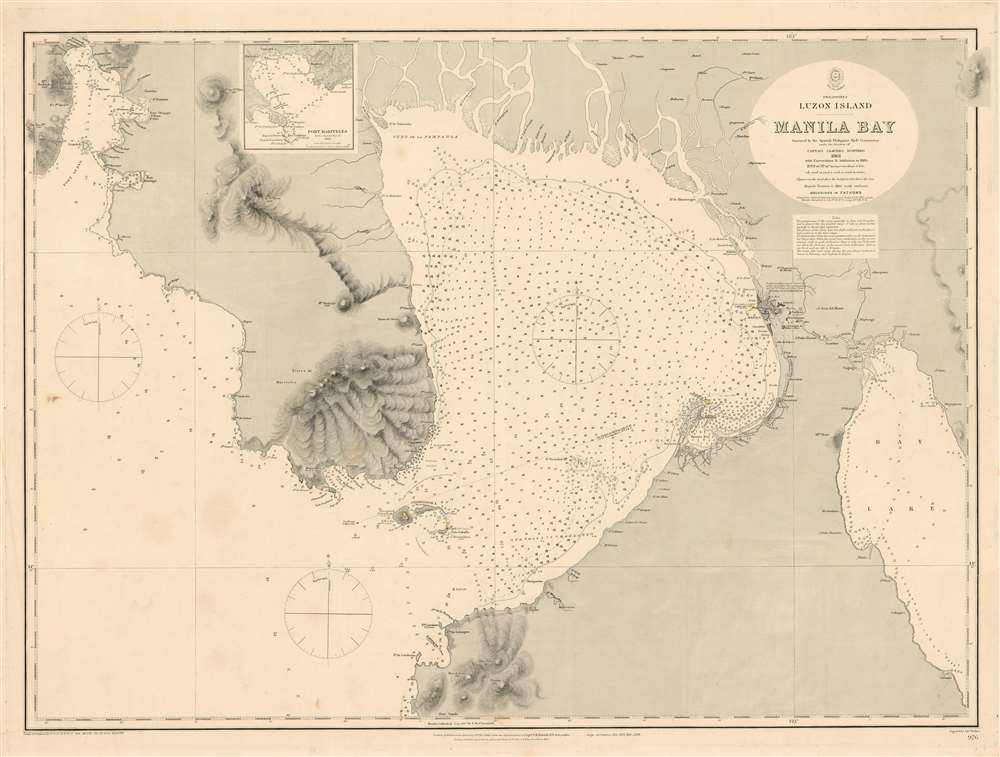 A large, richly detailed 1886 navigational map of Manila Bay in the Philippines, one of the largest available in the English language. Published and updated by the British Admiralty, it was made in cooperation with the Spanish/ Philippine hydrographer D. Claudio Montero, who oversaw Spanish navigational charting of the Philippines directly for more than a decade. This chart shows significant updating even since its 1876 issue: topographical hachures are much more extensive and detailed; Subic Bay shows improved soundings; Manila bay's soundings have considerably multiplied. Tentative attempts to chart the river systems emptying into the north of the Bay are evident. Manila has been re-engraved, reflecting the rebuilding of the city after the 1863 earthquake. The charting of Punta de Kalumpan and Port Limbones shows significant improvement over the 1876 edition of the map as well.

We have only seen this chart appear twice on the market. This map appears in only three institutional collections (National Library of Australia, University of Chicago, and the University of Manchester Library.) The Spanish antecedent to this map is known to to have been updated several times but OCLC places all known copies in the Biblioteca Nacional de España.


Captain D. Claudio Montero (1824-1885) was a Spanish naval officer, and head of the Hydrographic and Scientific departments of the Spanish Navy. Upon entering the navy in 1839 at the age of 15, he was promptly tasked with hydrographic projects, clearly being groomed for position as a navigator and chartmaker. In 1845 he was made a Lieutenants, and assigned to the Philippines, where he would remain for a significant part of his military career. In 1856 he was appointed head of the newly-formed Comisión Hidrográfica de Filipinas. Both under his direction, and following it - between 1856 and 1899 - the Comisión published thirty-five nautical charts of the Philippine archipelago. By 1868, he had been appointed major general of the Philippine station, a position he retained until his return to the Spain to receive his 1869 appointment as head Hydrography and Science in the Ministry of the Navy.He continued to focus on Philippine affairs: in 1871, he joined the Philippine Council, of which he would become vice president - and in 1877, he returned to the Philippine Islands, this time as governor of Mindanao and commander of the Naval Division of the South of the Philippines. However, in early 1878, just a few months after his appointment, health problems forced him to submit his resignation in both positions. He returned to sea after his recovery for a time, and held positions as Rear Admiral in Spain and in Havana prior to his death. Learn More...