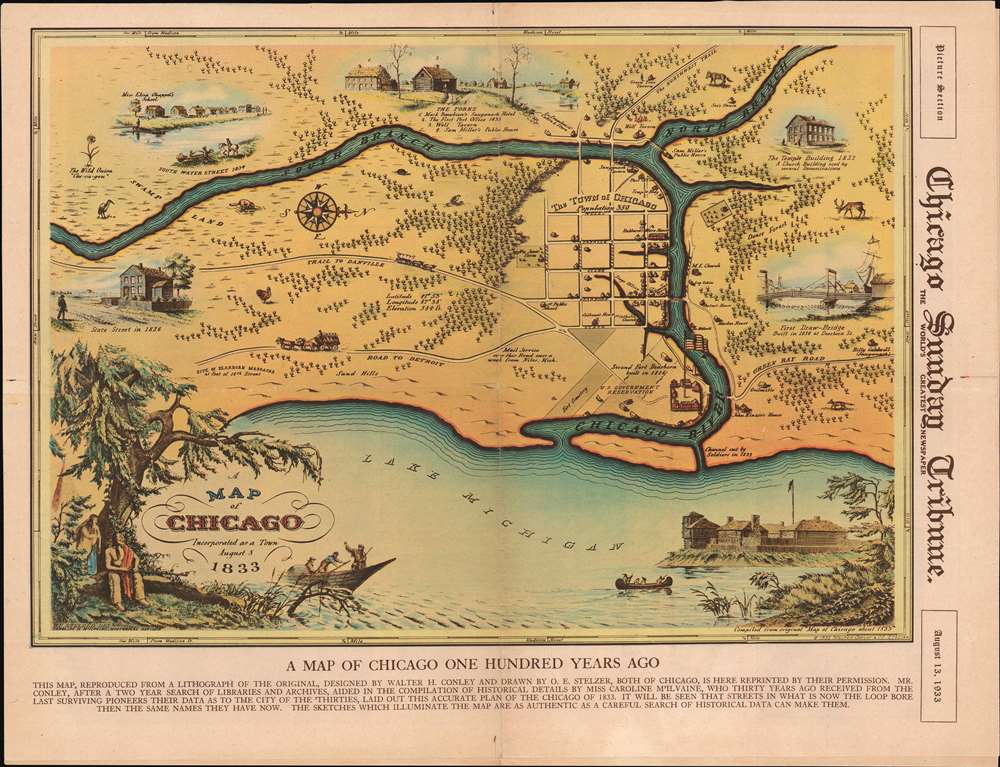 This is a beautiful 1933 pictorial map of Chicago issued by Walter Conley and Otto Emil Stelzer to commemorate the centennial of the founding of Chicago in 1833 for the 1933 Century of Progress Exhibition / World's Fair. Oriented with north to the right, it depicts Chicago at the time of its incorporation in 1833, when it was just a small settlement. The Chicago River is identified as it empties into Lake Michigan. The Town of Chicago is noted to have a population of 350. Throughout, the map notes trails, roads, swamps, and forests.

Historical sites and buildings are depicted pictorially. These include John Kinzier's House, 1st Public School, Mackee House, U.S. Government Reservation, etc. Various vignettes adorn the map, including images of animals, the First Draw-Bridge, The Temple Building, Miss Eliza Chappel's School, The Forks, State Street in 1836, and South Water Street in 1834. The title is surrounded by an illustration of a Native American couple resting under a tree in the lower left quadrant as what might be the boat of a fur trapper passes nearby. The lower right quadrant includes a sketch of Fort Dearborn.

The present example is a promotional variant map issued on the cover in the August 13, 1933 edition of the Chicago Sunday Tribune with the following caption:

This map, reproduced from a lithograph of the original, designed by Walter H. Conley and drawn by O. E. Stelzer, both of Chicago, is here reprinted by their permission. Mr. Conley, after a two-year search of libraries and archives, aided in the compilation of historical details by Miss Caroline McIlvaine, who, thirty years ago received from the last surviving pioneers their data as to the city of the thirties, laid out this accurate plan of the Chicago of 1833. It will be seen that streets in what is now the loop bore than the same names they have now. The sketches which illuminate the map are as authentic as a careful search of historical data can make them.

A Century of Progress International Exposition

A Century of Progress International Exposition was a World's Fair took place in Chicago, Illinois, from May 27, 1933, until October 31, 1934. Also known as the Chicago World's Fair, it celebrated Chicago's centennial. The fair's theme was technological innovation with the motto 'Science Finds, Industry Applies, Man Adapts'. The 1933 Fair boasted multi-colored buildings and was known as the 'Rainbow City'. Among the fair's exhibits were Admiral Byrd's polar expedition ship the City of New York, an exhibit detailing the history of Chicago, an exhibit of 'dream cars', and the first Major League Baseball All-Star Game as held at Comiskey Park.

This map was compiled, drawn, and published by Walter Conley and Otto Emil Stelzer in 1933. It is derived from a large black and white pictorial map, with greater coverage Chicago about 1833, by the same authors, which survives in only a single example and appears never to have been published. It was likely reduced and issued as here, because the authors felt a smaller more colorful map would sell more easily. Two editions of this map were published. One was a separately issued broadside, and the other the presently-offered edition published on the front page of the Picture Section of the August 13, 1933 edition of the Chicago Sunday Tribune. Five examples of the Chicago Sunday Tribune edition are cataloged in OCLC. They are part of the institutional collections at the University of Chicago, the University of Illinois at Chicago, the University of Illinois at Urbana-Champaign, the Abraham Lincoln Presidential Library, and the University of Minnesota Minneapolis.

Walter Haddon Conley (December 3, 1893 - November 3, 1936) was a Chicago based architect active in the middle of the 20th century. Conley was born in Spring Valley, Fillmore, Minnesota. He studied architecture at Beloit College where he was a member of the Alpha Zeta Chapter of the Sigma Chi fraternity. He graduated in 1917. In 1933, Conley completed his only cartographic project. In partnership with Otto Emil Stelzer (1901 - 1984), he drafted and issued a historical map of Chicago as it was in 1833. According to period reports, the map was the product of 2 years of research and caused a popular sensation when published and displayed at the Marshall Field Galleries. When Conley died, at just 42, he was working with the Federal Housing Administration. Conley married Lola Catherine Callaghan on June 18, 1919, in Olmsted, Minnesota, with whom he had a son. Learn More...


Otto Emil Stelzer (January 5, 1901 - April 1984), was a Swiss-German artist, poet, inventor, entrepreneur, sculptor, and engraver active in Chicago, Illinois; South Bend, Indiana; and Phoenix, Arizona. Stelzer was born in St. Gall, Switzerland. He emigrated to the United States in 1923, initially settling in South Bend, Indiana. He lived briefly in Chicago from 1920 - 1934, but relocated to German, St. Joseph, Indiana by 1935. During this period, in 1933, Stelzer produced two maps, a historical map of South Bend, Indiana as it appeared in 1831, and, in partnership with Walter Haddon Conley (1893 - 1936), a map of Chicago as it appeared in 1933. In 1941 he was employed as a commercial artist with the firm 'Advertising Artists' of South Bend, Indiana. Stelzer also, apparently, dabbled in poetry and was an inventor. For many years, he owned and managed the Aluminum Manufacturing Plant in South Bend, Indiana, from which he retired in 1969. Around this time, he relocated to Phoenix, Arizona, establishing Stelzer Studio, where he dabbled in sculpture, creating lamps, wall sculptures, and candelabras. He died in Phoenix, Arizona, in late April, 1984. In some references Stelzer's name is occasionally miswritten as 'D.E.' Learn More...