1717 De Fer Map of the World in Hemispheres 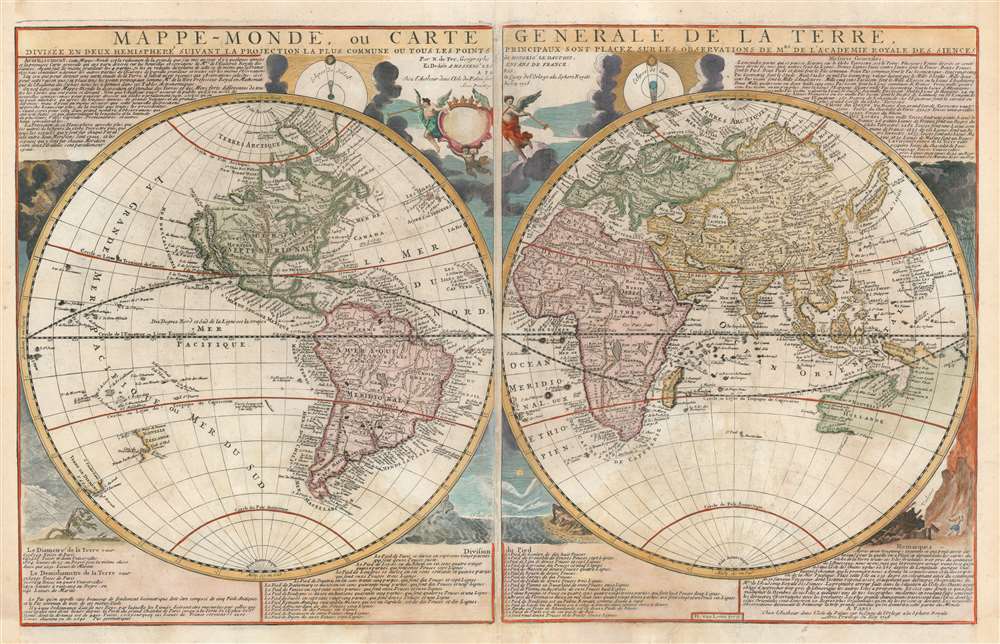 1717 De Fer Map of the World in Hemispheres

An attractive example of Nicolas de Fer's c. 1718 map of the world in two hemispheres. This map is an intermediate proof state of a map first published in 1700. Note the empty cartouche at top center - representing a transitional phase between the 1708 and 1718 editions. The map features numerous interesting cartographic anomalies, among them 'California as an Island', a speculative pacific northwest and Siberian Arctic, and partial pre-Cook mappings of New Zealand, New Guinea, and Australia. The whole is surrounded by beautiful decorative engraving by Herman van Loon illustrating tides, volcanos, and extreme weather.

A Survey of the Cartography

The map features much of interest and our survey of the document will begin with North America, where California is presented in insular form on the Luke Foxe model - this is discussed in detail below. North of California, the Pacific northwest is blank - underscoring the limited knowledge of this region then available. In the eastern part of North America, two large speculative lakes appear near Carolina / Georgia. These represent Lacus Aquae Dulche or Lake Apalache, discussed in detail below.

South America follows conventional mappings of the period wherein the coasts are well delineated but the interior, especially in modern day Brazil and Guyana, is largely speculative. Two lakes of note appear. Centrally, a large unnamed lake appears as the source of the Paraguay River, this is the legendary Laguna de Xarayes (discussed in detail below), believed to be the Gateway to El Dorado. El Dorado, the city of gold, is more commonly associated with another mythical lake in Guiana. This lake, generally known as Parima, appears here in Cassipa, and was first associated with El Dorado by Sir Francis Raleigh in the 16th century. Here much reduced, Parima / Cassipa represents the very real Lake Amucu, which rests on a large flood plain that occasionally fills, giving the impression of an inland sea.

Africa is tenuously mapped and, save for the coastline, is almost entirely speculative. The course of the Blue Nile correctly terminates in Lake Tana (Ethiopia), but the White Nile is directed to a apocryhal trans-continental mountain range - one of several that erroneously crisscross the Sahara and which would later be known as the Mountains of Kong. Further south ,the Ptolemaic lakes, Zaire and Zembre - traditionally the sources of the White Nile. float independent of other geographical features in an enormous Paid Inconnus.

Asia is mapped according to a combination of actual exploration, indigenous knowledge, and reports that date back to the travels of Marco Polo and the literature of antiquity. The Caspian Sea is malformed - as was common until the 1719 - 1721 surveys of Karl van Verden. Southeast Asia, long trafficked by European merchants, is well mapped. East Asia is more tenuously mapped further north. Japan approximates its actual form, with Yeso (Hokkaido) remarkably separate, but the coast to the east of Korea extends off the map to the northeast - and fails to reappear on the other side! The apocryphal Lake Chiamay, speculative source of the 5 great rivers of Southeast Asia, is mapped in what would today be Yunnan, China.

Australia, New Zealand, Tasmania, and New Guinea are mapped extremely tenuously. Only the western and northern coasts of Australia are mapped and these are merged with New Guinea. A variation in color coding suggests that the mapmaker may believe these to be separate, but the question is left intentionally ambiguous. Only southern Tasmania and parts of Eastern New Zealand are mapped, referencing 17th century Dutch exploration. Other islands in the Pacific are even more speculative. Davis Island, discovered by the English in 1685, is most likely Easter Island. Other islands, some roughly in the vicinity of Hawaii, are purely speculative and not representative of actual discovery.

The present map illustrates the island of California on the famous Luke Foxe / Sanson model. The insular California presented here is often erroneously referred to as the 'Sanson Model.' The term is in fact derived from a 1635 map of the North American Arctic drown by Luke Foxe. It was Foxe who invented many of the place names as well as added various bays and inlets to northern California. Among these are Talaaago, R. de Estiete, and the curious peninsula extending westward form the mainland, Agubela de Cato. Foxe's sources remain a mystery and his mapping may be based upon nothing more than fantasy, but Sanson embraced the model whole heartedly. Although Sanson did not invent this form of insular California, his substantial influence did popularize it with subsequent cartographers.

In Spanish Florida, which extends north to include most of the American Southeast, Lake Apalache, often called Lacus Aquae Dulce or the 'Freshwater Lake of the American Southeast' is noted. This lake, first mapped by De Bry and Le Moyne in the mid-16th century, is a mis-mapping of Florida's Lake George. While Theodor De Bry, working in 1565, correctly mapped the lake as part of the River May or St. John's River, subsequent navigators and cartographers in Europe erroneously associated it with the Savannah River, which instead of Flowing south from the Atlantic (Like the May), flowed almost directly from the Northwest. This error was taken up by Hondius and Mercator who, in their 1606 map, invert the course of the May River thus situating this lake far to the northwest in Appalachia. Consequently, 'through mutations of location and size [this] became the great inland lake of the Southeast' (Cumming, 478) – an apocryphal cartographic element that would remain one of Le Moyne's most tenacious legacies. Lake Apalache was subsequently relocated somewhere in Carolina or Georgia, where De Fer maps it and where it would remain for several hundred years.

Here, although unlabeled, the Laguna is exceptionally large and inviting.

This map was first published in 1700 by Nicolas de Fer, who ordered it engraved by Herman van Loon. The map is primary derived from his 1694 wall map, but his heavily updated through, especially in California, Australia, and Japan. The map is known in 6 editions, all of which vary slightly with regard to the dates, imprint, and dedication, but are otherwise cartographically similar. These were 1700, 1702, 1705, 1708, 1718, and 1728. The present example, with its blank cartouche and simple crown, appears to be an intermediary proof state, somewhere between 1708 and 1718. Although this map appears on the market from time to time in its various editions, the present mid-state proof is unique.