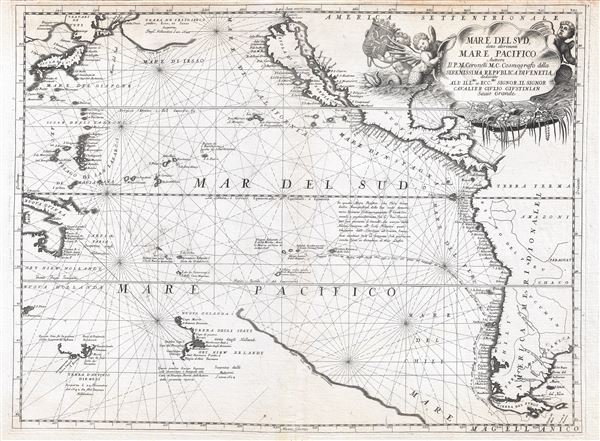 Scarce map of the Pacific showing California as an Island as well as early exploration of New Zealand and Australia.

An exceptional 1691 nautically styled map of the Pacific Ocean by the Venetian cartographer Vincenzo Maria Coronelli. Coronelli's map covers the Pacific from Japan to New Zealand and from New Guinea to Tiera Del Fuego and the Yucatan. The map focuses on the new discoveries in the Pacific by Dutch, French, and Spanish, and as such is styled as nautical chart with heavy coastal but only limited inland detail. The map features much of note including a presentation of California as an Island, and illustration of a speculative Terra de Yesso (Hokkaido), and early speculative mappings of Australia, Tasmania, New Zealand, and New Guinea.

Coronelli boldly presents California in insular form on the Luke Foxe model popularized by Nicholas Sanson in 1657. Luke Foxe as an English navigator who lead a 1631 expedition in search of the Northwest Passage. Although he had no luck in his hunt, his expedition lost no lives, which is a feat for early explores in Arctic waters. The maps associated with his expedition featured a surprising illustration of California in island form. It was Foxe who is credited with introducing the curious form of northern Insular California, including the Bay of Talago, the Rio de Estiete, and the unusual peninsula extending from the mainland, Agubela de Gato. The origin of this cartography beyond Foxe remains a mystery given that Foxe himself never sailed anywhere near California.

Across the Pacific Australia, New Zealand, and Tasmania are presented in very speculative form referencing the voyages of Abel Tasman. Australia is identified as both Niew Hollandt and Nuova Hollanda. Only parts of Australia's northern shore and Carpentaria are evident. Similarly, only the southern shores of Tasmania are identified. New Zealand is even more speculative and only its western shores are noted. Although a speculative landmass to the east of New Zealand - a remnant of Terra Australis, suggests that it might be connected. Coronelli incorrectly suggests that the islands were discovered in 1654.

Coronoelli further traces the 1616-1617 voyages of Jacob Le Maire and Willem Cornelisz Schouten around Tierra del Fuego and into the Pacific. This remarkable voyage was sponsored the Austraalse Compagnie, an organization founded by Isaac Le Maire, Jacob's father, in an attempt to break up the VOC monopoly on the East India trade. The goal was to find new trade routes to the Far East and in this they succeeded, charting the passage around Cape Horne (named after their lost ship, the Hoorne). Nonetheless they were politically defeated back in Holland where the States General ruled that Austraalse Compagnie would not be permitted to trade in the Far East.

At the northern most extreme of the map we can find a large landmass extending eastward towards North America labeled 'Terra de Iesso o Ieco'. While the term Yesso typically refers to Hokkaido, here identified as Yupi, Coronelli has enlarged Yesso and moved it further east to correspond to the Islands discovered by Maerten de Vries and Cornelis Jansz Coen in 1643. The Vries-Coen expedition was launched in response to a obscure Spanish legend describing gold and silver rich islands somewhere to the east of Japan. These islands were said to be so saturated in precious metals that the tall, friendly, light skinned inhabitants even fashioned their homes out of gold. As improbable as it may seem, the idea inspired at least two expeditions to the region. Anthony Van Diemen, the director of the Dutch East India Company in the Indies, initiated an unsuccessful first expedition under Abel Jansz Tasman and Matthijs Hendricksz Quast in 1639, and a second more interesting expedition under Maerten de Vries and Cornelis Jansz Coen in 1643. It is this latter mission that most influenced the present map. The expedition followed the southeast coast of Hokkaido in a northeasterly direction where it encountered at least two of the Kuril Islands, Kunashir and Iturop, before sailing westward where the navigators correctly identified the forklike peninsulas of southern Sakhalin, but not the strait that separated them from Hokkaido. From here they again sailed south into more known waters. Vries and Coen were the first Europeans to enter these waters, which were in fact little known even to the Japanese. They made early contact with the indigenous Ainu people of Hokkaido, who they noted had silver-hilted daggers. They were the first to discover the Kuril Islands, here identified as 'Terra delgi Stati' (a variant on Staten Eyland) and 'Iesso o Ieco' (more commonly Compagniesland). 'Terra delgi Stati' is in fact a reasonable approximation of Kunashir, the westernmost of the Kuril Island, while 'Iesso o Ieco' is, according to the convention of the period, a grossly overstated speculation on Iturop.

The elaborate title cartouche in the upper right is a fine example of the beautiful engraving typical of Coronelli's work. The cartouche frames the title with a scallop shell motif. The lower half of the shell is open to reveal the bounty of the sea, including pearls and corals. Putti support the shell and hold aloft the janiform armorial crest of t Holy Roman Empire. The map is dedicated to Cavalier Giulio Giustinian.

Overall, this is one of the most beautifully produced and dramatic maps of the Pacific to appear in the 17th century. It was initially issued in the 1691 in the first edition of Atlante Veneto and subsequently reissued in the 1695-97 edition. There is only one known state, but a small plate crack did develop just to the right of Tierra de Fuego between the 40th and 45th south latitudes. The size of the crack can be used to determine if a particular map was an early or late strike of the plate. In the present example the crack is minimal and restricted to the border, thus suggesting an early strike.