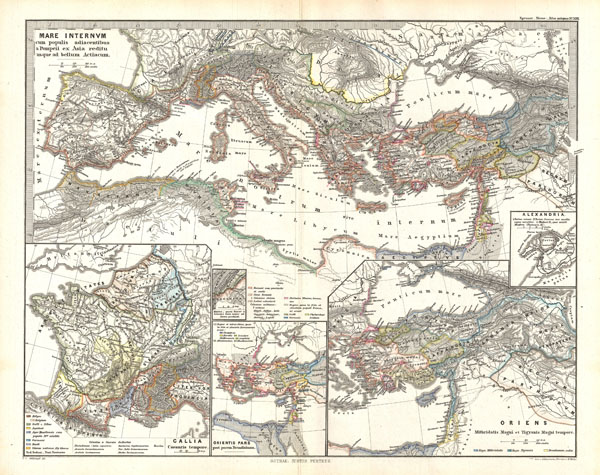 This is Karl von Spruner's 1865 map, The Mediterranean with Adjacent Peoples from Pompey's Return from Asia to the Battle of Actium (Mare Internum cum populis adiacentibus a Pompeii ex Asia reditu usque ad bellum Actiacum). The map covers the modern day countries of Spain, Italy, Switzerland, Greece, the Balkans, Turkey, and northern Africa. It also features five inserts showing a detailed depiction of France, Turkey, Oriens (or the East), Provincia and Alexandria. Map shows important cities, rivers, mountain ranges and other minor topographical detail. Countries and territories are designated with colored borders and each map includes a key or legend. The whole is rendered in finely engraved detail exhibiting throughout the fine craftsmanship of the Perthes firm.