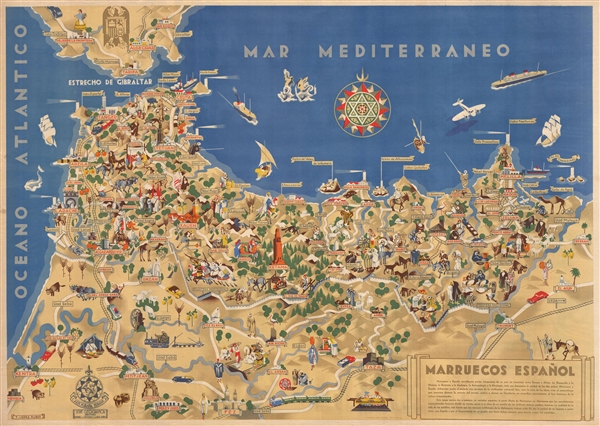 Vividly illustrated pictorial map of the Spanish Protectorate in Morocco.

A c. 1940 graphically rich pictorial map of the Spanish protectorate in Morocco (1912 - 1956) by Francisco López Rubio. The map covers roughly from Gibraltar to Fes, and from Kenitra to Berkane. The whole is richly illustrated in López Rubio's 'less is more' style, typified by large bold color blocks and geometric forms. The imagery suggests a colorful lively culture, a substantial reliable infrastructure, and a vibrant economy.

This map is part of Cartographica Hispanica's 'Serie Geografica,' a collection of pictorial cartoon maps of parts of Spain issued by López Rubio and his partner Manuel L. Ortega. The map was printed in Barcelona by Graficas Ultra. It appears to be quite rare and is not listed in the OCLC.

Francisco López Rubio (1895 - 1965) was a Spanish cartoonist and humorist active in Madrid during the second half of the 19th century. López Rubio was born in Granada in 1895 and relocated to Madrid to pursue a career as a cartoonist in 1915. His work, which has an art deco aesthetic, is defined by simple lines and geometric color blocks. His more famous younger brother, Jose Lopez Rubio y Herreros, was songwriter for Paramount Pictures and was nominated for an Oscar for his work on the Bogart film, Treasure of the Sierra Madre. Learn More...

Very good. No flaws.
Looking for a high-resolution scan of this?