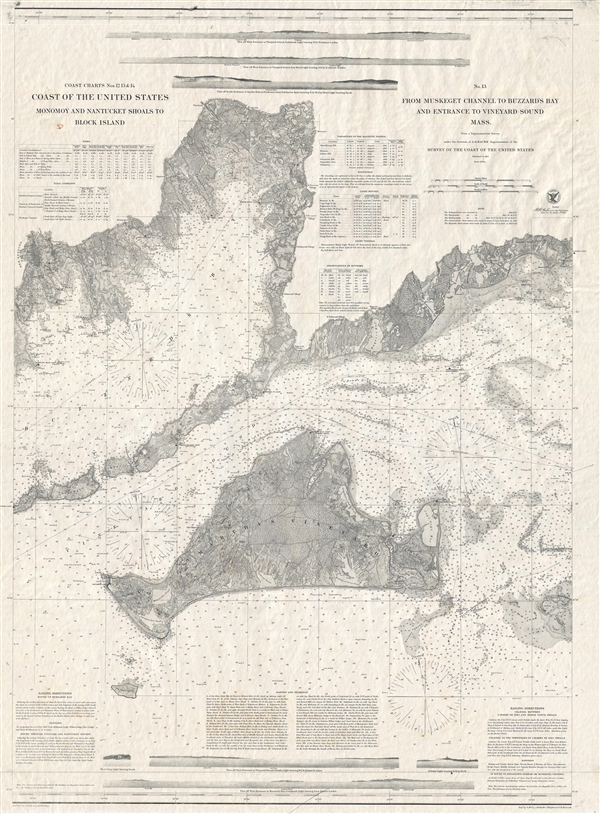 This separately issued nautical chart is the culmination of nearly 20 years of Coast Survey work in the Vicinity of Martha's Vineyard and Buzzard Bay.

An impressive separately issue 1860 nautical chart of Martha's Vineyard and Buzzards Bay. This chart represents the U.S. Coast Survey's most advanced work in the vicinity of Martha's Vineyard. The map covers from New Bedford to Muskeget Island and from Wareham to Nomans Land Island. The chart is intricately detailed both inland and at sea. Individual buildings, topography, roads, fields, light houses, and topography are noted inland. At sea countless depth soundings as well as an intricate shading system illustrate oceanic depths as well as shoals and other hidden dangers. At both the top and bottom of the map there are finely engraved shore profiles which are doubtless of great use to the mariner in identifying coastal features. Here and there on the map textual annotations provides wealth of practical information for the mariner ranging from sailing directions to notes on Dangers, ranges, bearings, soundings, and light houses, to tidal and magnetic variation charts.

The Coast Survey began its work in the vicinity of Martha's Vineyard shortly after its founding in 1844. Subsequent work on hydrography and topography persisted throughout the 1840s and 1850s. This is one of the largest and finest examples of the charts culminating from the coast survey's work. It was completed under the superintendence of A. D. Bache.

The present chart was intended for use either as a stand alone or as the central part of a three chart set entitled Coast of the United States Monomoy and Nantucket Shoals to Block Island. Both titles appear on this chart.

It is of note that this separately issued chart is both larger and more detailed than a similar chart issued in the annual Superintendent's Report.

Very good. Minor spot under left title. Else clean.
Looking for a high-resolution scan of this?