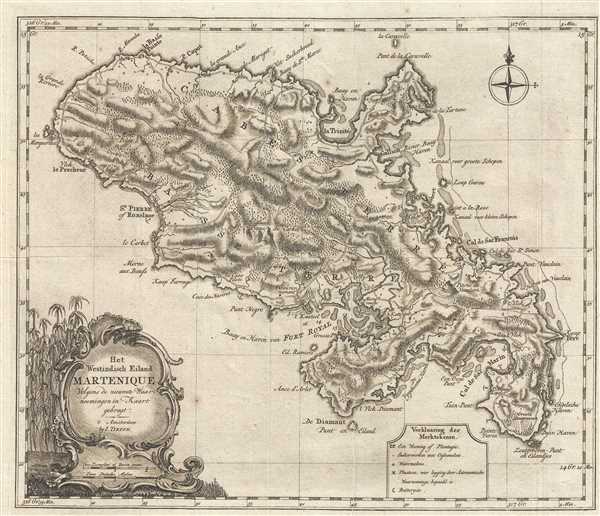 Labels Grandes Rivières and Basse Pointe in approximately the same location where they are today.
$250.00

This is a c. 1765 Isaak Tirion map of the Caribbean island of Martinique. The map depicts the whole of the island from Grande Rivière to Pointe Varin and from St. Pierre of Roxelane to La Caravelle. Highly detailed, numerous locations are labeled both along the coast and in the island's interior. Hilly topography is illustrated, as well as myriad trees. Depth soundings are recorded near Fort Royal, but are absent everywhere else on the map. Safe harbors are noted by small anchors in several locations, including in the Cul de Sac Marin and in the Cul de Sac Robert. Shoals and other hazards are illustrated off the coast, along with numerous smaller islands. A decorative title cartouche is situated in the lower left corner.

This map was produced by Isaak Tirion and published in Amsterdam c. 1765.