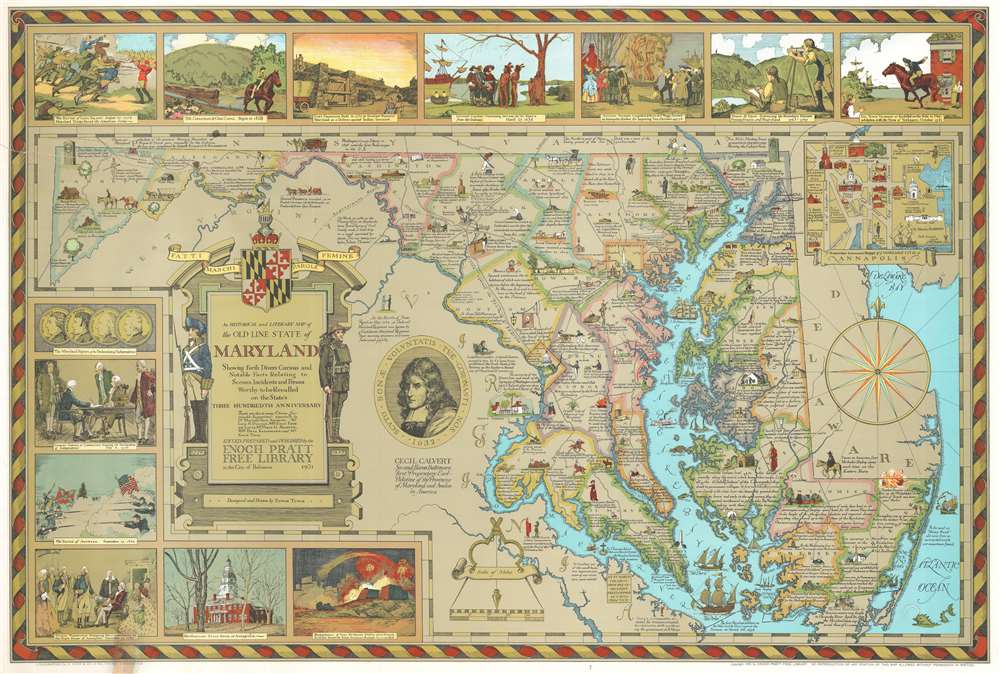 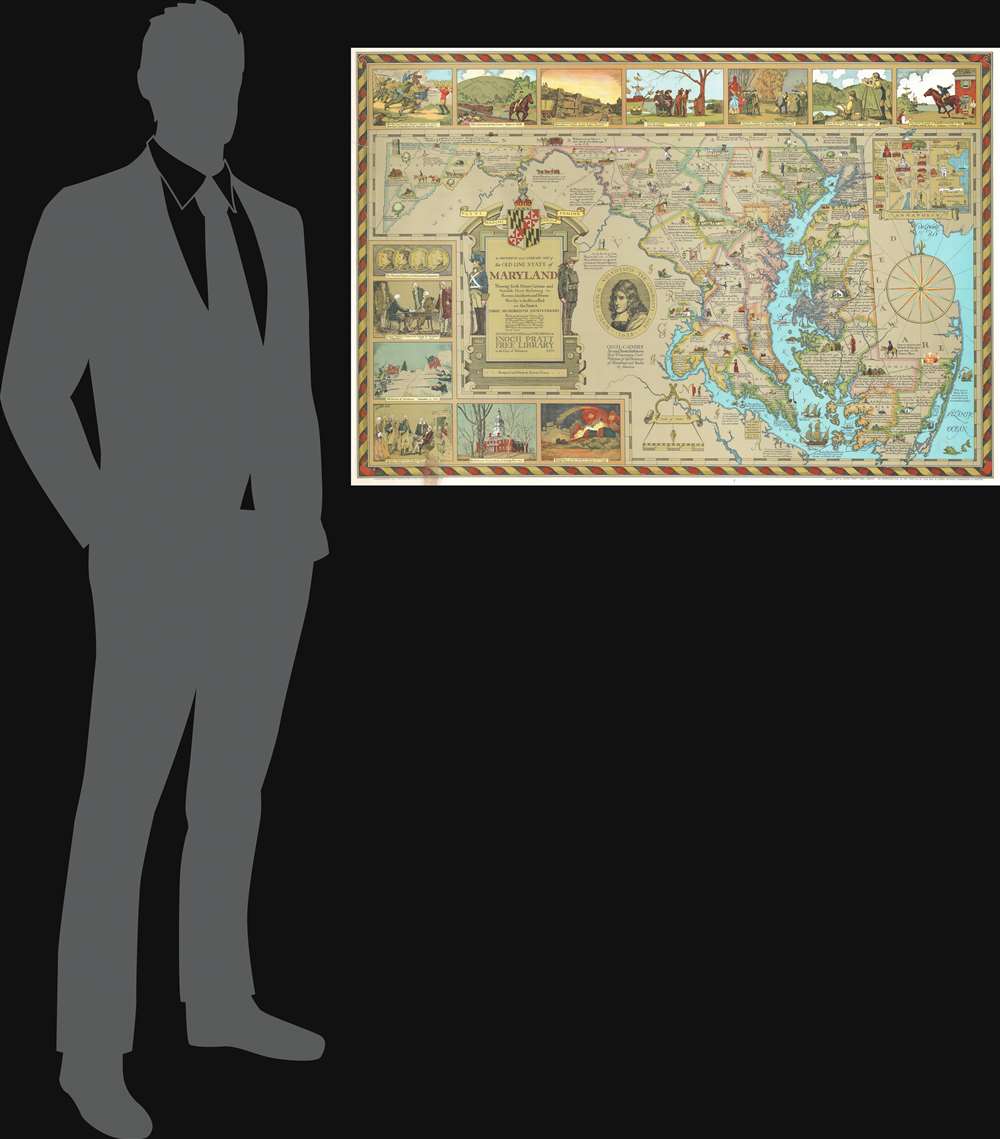 Issued during the Golden Age of American Pictorial Maps (c. 1920 - 1960), this wonderful 1931 first edition historical and pictorial map of Maryland was the first map issued by Edwin Burdette Tunis. The map covers all Maryland, including the Chesapeake Bay in full, as well as adjacent parts of Delaware and Virginia. Published in conjunction with the Enoch Pratt Free Library, this type of pictorial map is a natural extension of Tunis' meticulous attention to historical detail. Copious annotations throughout describe historical personages, locations, battles, and buildings, as well as expounding upon the general historical progression of the region. Vignettes above and to the left of the map proper illustrate the Battle of Long Island, the opening of the Chesapeake and Ohio Canal, the construction of Fort Frederick, the purchase of St. Mary's by Leonard Calvert from indigenous American Indian tribes, and more. An inset in the upper left details Annapolis and the U.S. Naval Academy.

Pictorial qualities have been common in cartography from at least from the 16th century, when publishers like Braun and Hogenberg incorporated view-like qualities and other pictorial elements into their famous city plans. Braun and Hogenberg, and similar cartographers, issued their town books to express, not necessarily the geography their subjects, but rather the 'essence' of the town/city. As mathematics and surveying principles became more advanced, travel increased, and the ability to translate 2 dimensional cartographic perspectives into an understanding of the actual world became commonplace, maps themselves transformed. This trend is a recognizable progression that evolved cartographic conventions from the 17th to the 19th centuries. By the late 19th century most maps had become geographical tools that illustrated the region cartographically, but failed in the original raison d'être as expressed by Braun and Hogenberg, to illustrate a place's 'essence'. So, where a city map of 19th century Paris might provide a completely navigable presentation of the city, one could glean almost nothing of Paris' character from it. In the late 18th century, the first modern 'pictorial' style maps developed. These maps, like Tomas Lopez's 1788 map of Seville attempted to provide both cartographic accuracy and pictorial elements that might convey the character of the city. In that case, Lopez incorporated pictorial vignettes to illustrate important buildings and monuments. This style became increasingly commonly throughout the 19th century and early 20th centuries, particularly for centers of commerce like London, Paris, and Rome, where they are often mass produced and referred to as 'monumental' maps. The style further evolved in the early to mid-20th century, when revolutionary cartographers and illustrators like MacDonald Gill, Jo Mora, Frank Dorn, Ernest Dudley Chase, and many others, combined vignette style illustrations, modern printing techniques, inspiration from Japanese printmaking and manga, and from clever satirical cartographers/artists like Fred Rose, to produce maps that once again focused on revealing the essence a place, usually, but not always, at the sacrifice of cartographic precision.

This map was lithographed in color by A. Hoen and Company of Baltimore, Maryland. There are two editions, the first published in 1931, as here, and a second reissued by the Enoch Pratt Free Library in 1956. This piece is well represented in institutional collections.

Edwin Burdette Tunis (December 8, 1897 - 1973) was an American painter, mural artist, illustrator, radio announcer, actor, theater set designer, and author active in Maryland during the middle part of the 20th century. Tunis was born in Cold Spring Harbor, New York, but moved around a lot a child with his father's work, before settling as an adult in Maryland. Tunis is known for his meticulous attention to historical detail and the production of several illustrated volumes describing various aspects colonial and pioneer life. Although he made few pictorial maps, they genre was a natural extension of his historically driven style. His first and best map, of Maryland, was published in 1931. He also issued maps of Baltimore, the Chesapeake Bay, and York County Pennsylvania. Learn More...