1865 Johnson Map of Maryland and Delaware 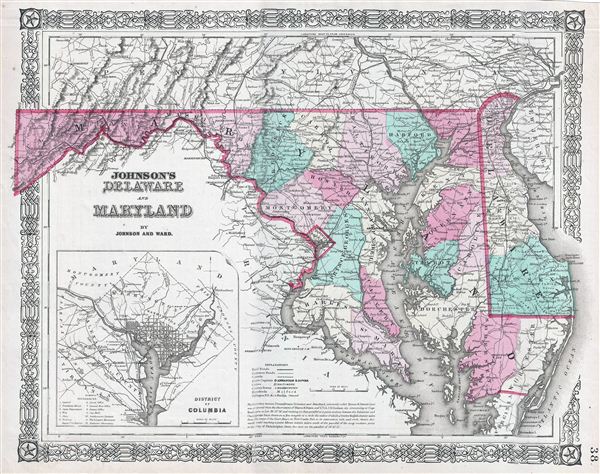 1865 Johnson Map of Maryland and Delaware

This is a beautiful example of Johnson and Ward's 1865 map the Delaware and Maryland. It covers both states and shows parts of adjacent states. Includes a large inset map of the District of Columbia or Washington D.C. Made during the Civil war, this map includes a paragraph notation on the surveying of the boundary between Pennsylvania, Delaware, and Maryland, commonly called the 'Mason Dixon Line.' This line marked the geographical division between the Northern from the Southern states at the outset of the Civil War. Throughout, Johnson identifies various cities, towns, rivers and assortment of additional topographical details. It features the fretwork style border common to Johnson's atlas work from 1864 to 1869. Published by A. J. Johnson and Ward as plate no. 38 in the 1865 edition of Johnson's New Illustrated Family Atlas. This is the first edition of the Johnson Atlas to be attributed to Johnson.