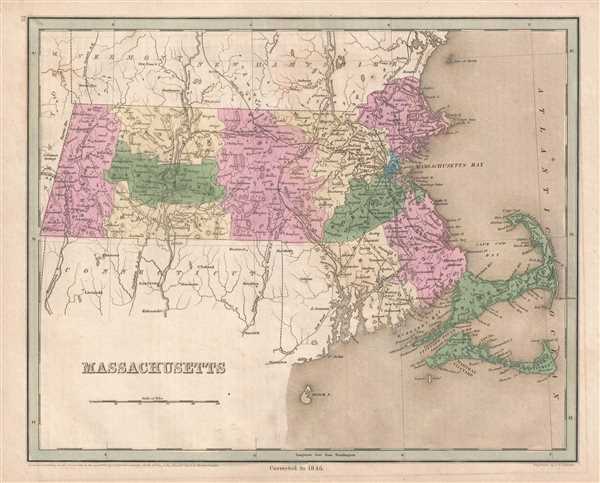 Depicts the extensive rail network in Massachusetts, including the Old Colony Railroad to Cape Cod.

This is an 1846 Thomas G. Bradford map of Massachusetts. The map depicts the region from New York to the Atlantic Ocean and from Vermont and New Hampshire to Block Island. As is prevalent among many maps from Bradford's A Universal Illustrated Atlas, the recently constructed rail network throughout Massachusetts and the surrounding states is highlighted. Many newly-chartered railroad companies, including as the Old Colony Railroad, the Norwich and Worcester Railroad, and the Worcester and Providence Railroad, are labeled. Each of these railroads would follow the same general trajectory: begin operations, go through a series of mergers and acquisitions, and eventually be acquired by another, even larger, railroad company. Some of the lines illustrated here are still in operation today, while others, such as portions of the Old Colony Railroad's network, have been converted into multi-use rail trails.