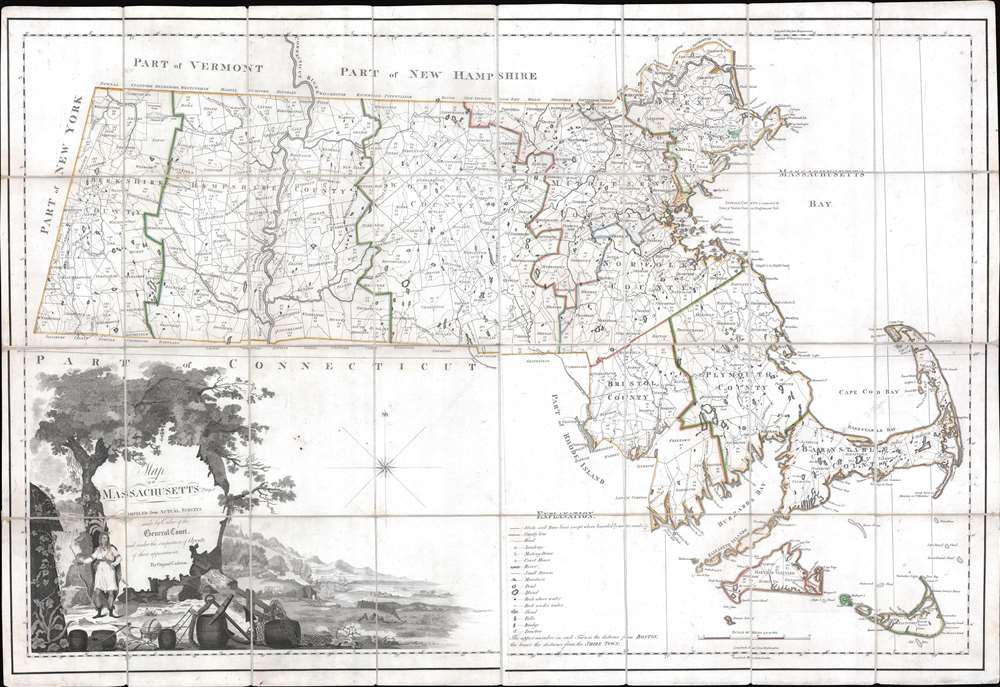 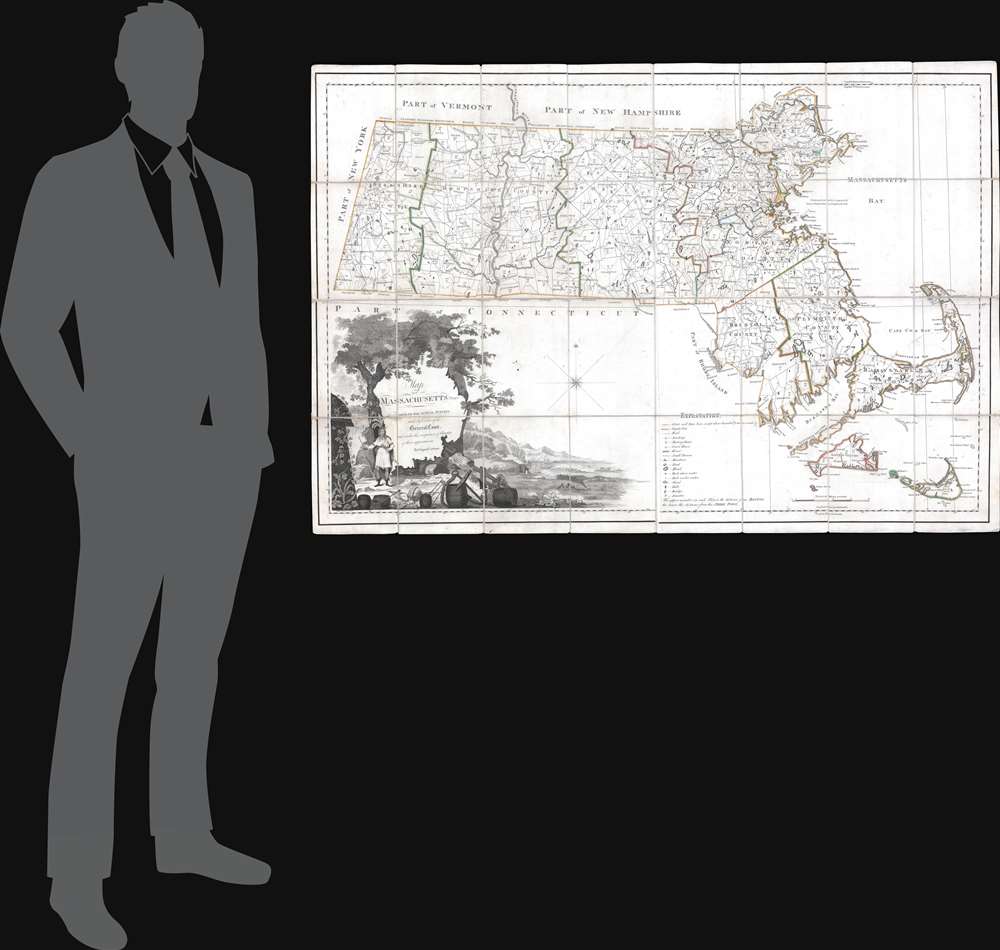 Known as 'The Agent's Map', this is a fine example of the first official map of Massachusetts, published in 1801 by Osgood Carleton. The map emerged out of a long and complex struggle to produce a large-scale, accurate, and comprehensive state map - something increasingly important in the heady early days of independence following the American Revolutionary War (1775 - 1783). This expansive map covers all of Massachusetts in considerable detail, giving no attention whatsoever to the neighboring states. While generally ignoring topography, the map offers superb practical detail throughout, noting roads, county borders, schools, meeting houses, courts, milage from Boston, and more. The sole mountain illustrated is the Hoosack Range, near modern-day North Adams.

A Long and Complicated History

The Massachusetts legislature put out a call for a large-scale state map in 1792. In the subsequent months, the state received several proposals. Nearly 18 months later, in June of 1794, they accepted a proposal put forth by veteran cartographers Osgood Carleton and John Norman. Both Carleton and Norman were known to the Legislature. They traveled in educated circles and had already published an important nautical atlas of great benefit to Massachusetts seamen. They further liked Carleton's proposal that a regional map be produced by each town - at the town's expense - sparing the state the need for immediate cash outlay.

While the process of mandating that each town produce its own local survey, at its own expense, became the norm for state mapmaking, in 1794 it was revolutionary. Some towns had already produced detailed surveys, so had no problem submitting them, but most lacked the means and expertise to issue anything comprehensive. Provincetown, for example, submitted a 'plan' consisting of nothing more than an outline of the town with no interior detail. More than 90 other towns simply ignored the legislative mandate and submitted nothing at all. The legislature began assessing tax penalties on non-compliant towns, and all but 17 eventually produced surveys, although many were inaccurate and useless.

Despite these many issues, Carleton and Normal completed the map roughly on schedule, presenting it to a committee established by the Massachusetts Legislature on June 29, 1798. The committee was unimpressed. The engraving, done by Norman, was hastily completed and sloppy, leading to numerous errors. Moreover, attempts to illustrate topography with mountain profiles resulted in a sloppy, cluttered map. The legislature demanded these issues be fixed,

It is expected in the Mean time they correct all the Error in said maps, and take out the many accidental strokes in the Plate; and also that they make Margins of the Rivers, Ponds, and Sea Coasts neater, and that the whole Plate be better Polished… (Boston Gazette, Aug. 20, 1798, quoted in Ristow, W., American Maps and Mapmakers, p. 91.).

The First Official Map of Massachusetts

It took Carleton more than two years to revise the map to his satisfaction. In this time, new surveys arrived from the delinquent towns, and others were ordered or updated. Carleton split with Norman and hired two new engravers, Samuel Hill and Joseph Callender, both well known in Boston for quality work. He also reached out to the artist and line-and-stipple engraver George Graham to produce a striking new vignette cartouche. The final product incorporated the wealth of new information, but also removed all topography (except lakes and rivers), yielding a clean, easy-to-read map rich in detail. The new cartouche was also impressive, featuring rich pastures, untamed natural resources, a wealth of maritime trade goods, and a proud American Indian chief. The new map was lauded by the 'Agents', approved by the state General Court, and printed in 1801 in a run of 500 copies - this example is from that printing.

This map was drawn by Osgood Carleton and engraved in Boston by Samuel Hill and Joseph Callender. It was first approved by the 'Agents' Jedidiah Morse and John Davis, then by the state General Court, thus becoming the first official map of Massachusetts. Of the first map of 1798, which was rejected, 400 were printed and some sold, others lost or destroyed. Of this, the second edition, 500 were printed and disseminated. How many survived is unknown. In 1802, the contract for the map was sold to B. and J. Loring, who issued another edition of 500 bearing their own imprint. We note examples of this edition at approximately 7 institutions, although some may refer to digital-only content. The third edition, 1802 Loring, is more common. All are rare on the market.

Osgood Carleton (June 17, 1742 - June 1816) was a Massachusetts-based mapmaker, surveyor, mathematician, philosopher, astronomer, and all-around polymath, active in the late 18th and early 19th centuries. Carleton was born in Nottingham West, New Hampshire, the eldest of 7 children. His father was a farmer and in his early years Carleton had no opportunity for formal education. He joined the colonial militia and participated in the French and Indian War (1754 - 1763). During the war, he became close to the British-Swiss engineer John Henry Bastide (1700 - 1770), under whom from age 15, he served as a clerk for 5 years - likely Carleton's formal education dates to this period. Carleton's own writings suggest he traveled extensively in British circles with Bastide. He later returned to New Hampshire, establishing himself as a surveyor, completing both civil and private contracts. During the American Revolutionary War (1775 - 1783), he joined the Massachusetts Regiment, later the 16th Continental Regiment, where he served as quartermaster with the rank of sergeant. In 1777, He was promoted to lieutenant in the 15th Continental. When his health failed, he was transferred to the Invalid Corps - where he also served as quartermaster until mustered out in 1783. After the war, Carleton settled in Haverhill, Massachusetts. In the wake of the War, education in practical sciences where in high demand and om June of 1787, the Boston Board of Selectmen approved his application to open a school offering lectures in surveying, gauging, mensuration, algebra, geometry, geography, astronomy, dialing, navigation, gunnery, architecture. Around the same time Carleton took up commercial mapmaking, partnering with the chartmaker John Norman (1748 - 1817). He was involved with the publication of Norman's c. 1790 nautical atlas of the United States - the first such atlas published domestically. Carleton also received state patronage for his cartography, issuing the first official large-scale maps of Massachusetts and Maine, as well as significant maps of Connecticut and Rhode Island. He also issued a popular almanac, Carleton's Almanac, the precursor to the still published Old Farmer's Almanac. Despite renown as a cartographer, teacher, and publisher, Carleton struggled with penury, declaring bankruptcy in 1803. After his bankruptcy he turned fully to commercial cartography, becoming one of American's first professional cartographer. He issued various coast pilots, atlas maps, and maritime guides. Even so, when he died in 1816, his estate was calculated at a meager 33.44 USD. Learn More...


Samuel Hill (July 27, 1750 - 1809) was a Boston-based engraver and copperplate printer active in the late 18th and early 19th centuries. He was born in Massachusetts, the son of Alexander and Thankful (Allen) Hill. Hill was a generalist engraver who published in Massachusetts Magazine, Defoe's New Robinson Crusoe (1790); Lavater's Essays on Physiognomy (1794); as well as maps for the American Universal Geography (1796); Cook's Three Voyages to the Pacific Ocean (1797), Osgood Carleton (1801), and others. He is best known for engraving one of the first maps of Washington D.C. in 1792. Hill maintained an office at 2 Cornhill, Boston. Learn More...


Joseph Callender (May 6, 1751 - November 10, 1821) was an American silversmith and copperplate engraver based in Boston, Massachusetts. Callender was bornin Boston and from 1764 apprenticed under Nathaniel Hurd (1729 - 1777). He took his journeymanship in the silversmithing shop of Paul Revere (1734 - 1818). Around 1784 he took over the Hurd ship and expanded his portfolio to copperplate printing and seal engraving, as well as traditional silversmithing. He engraved the seal of the Bank of Massachusetts in 1784 and the first official map of Massachusetts for Osgood Carleton in 1801. Learn More...


George Graham (fl. c. 1794 - 1812) was an American stipple and mezzotint engraver and artist active in the late 18th and early 19th centuries. He is known for his folio portraits of John Adams, Samuel Adams, Alexander Hamilton, and Commodore Hull. In cartographic circles, he drew the vignette for Osgood Carleton's 1801 first official map of Massachusetts. Learn More...