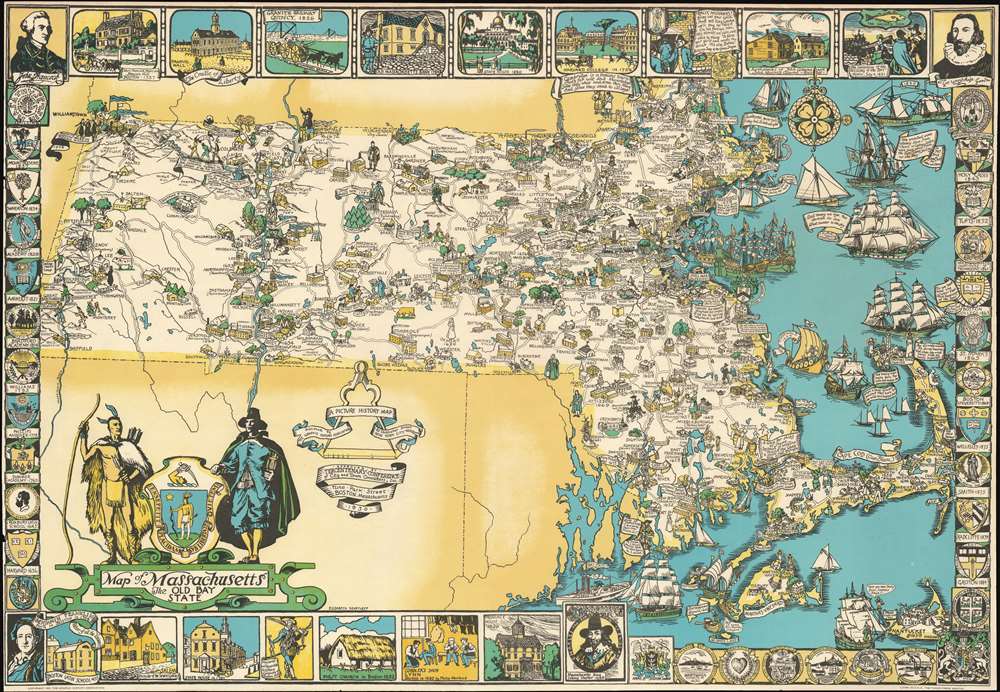 Made by one of the great female pioneers of pictorial cartography.
$950.00

An uncommon 1930 pictorial map of Massachusetts issued by Tudor Press and Elizabeth Shurtleff, one of the most prominent female pictorial mapmakers. The map covers all of Massachusetts with vignette cartoon illustrations of various towns. Considerable focus is placed on industry, and many towns are highlighted with factory and/or mill illustrations. Indications of the merchandise produced there are also noted, including knit goods, shoes, jewelry, optical goods, textiles, etc. Other illustrations reference events of the American Revolutionary War. Surrounding the map are decorative armorial crests celebrating the many distinguished institutions of learning located throughout Massachusetts. Among them are Harvard, the Roxbury Latin School, Williams, Phillips Andover, the Bradford Academy, Amherst, Wheaton, the Abbot Academy, Mount Holyoke, Holy Cross, Tufts, MIT, Boston College, St. Marks, and Boston University.

This map was drawn by Elizabeth Shurtleff and published by the Tudor Press. There are two states, a three-color variant - as here - and a 4-color variant with red tones. We have not identified another three-color issue, as here, but the more prevalent 4-color variant is evident in 5 institutional collections.