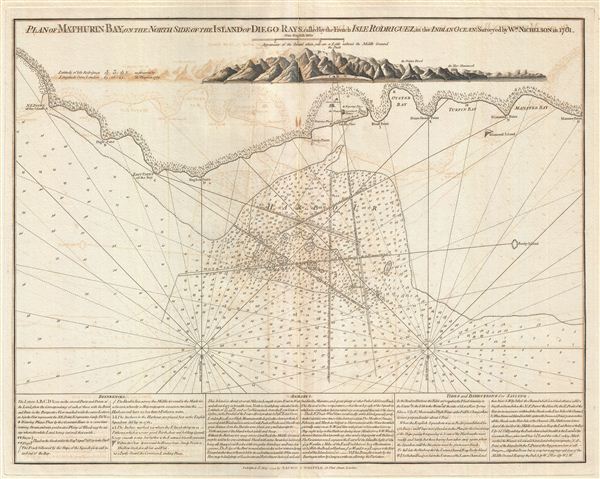 This is a fine example of Laurie and Whittle's 1794 nautical chart or maritime map of the port of Mathurin Bay, Iles. Rodrigues, Mauritius. The map shows detail sounding in the harbor as well as the early settlement that would eventually evolve into Port Mathurin, the capital of the Island of Rodrigues, a semi-autonomous dependency of Mauritius. Rodrigues was settled by the French in 1691 and Port Mathurin founded in 1735. Though rarely visited due to its remoteness, the harbor was the subject of a detailed survey by Englishman William Nichelson in 1761. The map identifies the site of the French governor's house, storehouses, and watering holes.

Laurie and Whittle prepared this chart for their 1799 issue of the East-India Pilot. Though most charts in the East-India Pilot were derived from earlier maps prepared for Jean-Baptiste d'Apres de Mannevillette's 1745 Neptune Oriental, this particular chart is a new production unique to Laurie and Whittle. The map offers rich detail including countless depth soundings, notes on the sea floor, commentary on reefs, rhumb lines, shoals, place names and a wealth of other practical information for the mariner. This map was registered by Laurie and Whittle from their offices at 53 Fleet Street, London, on May 12, 1794.