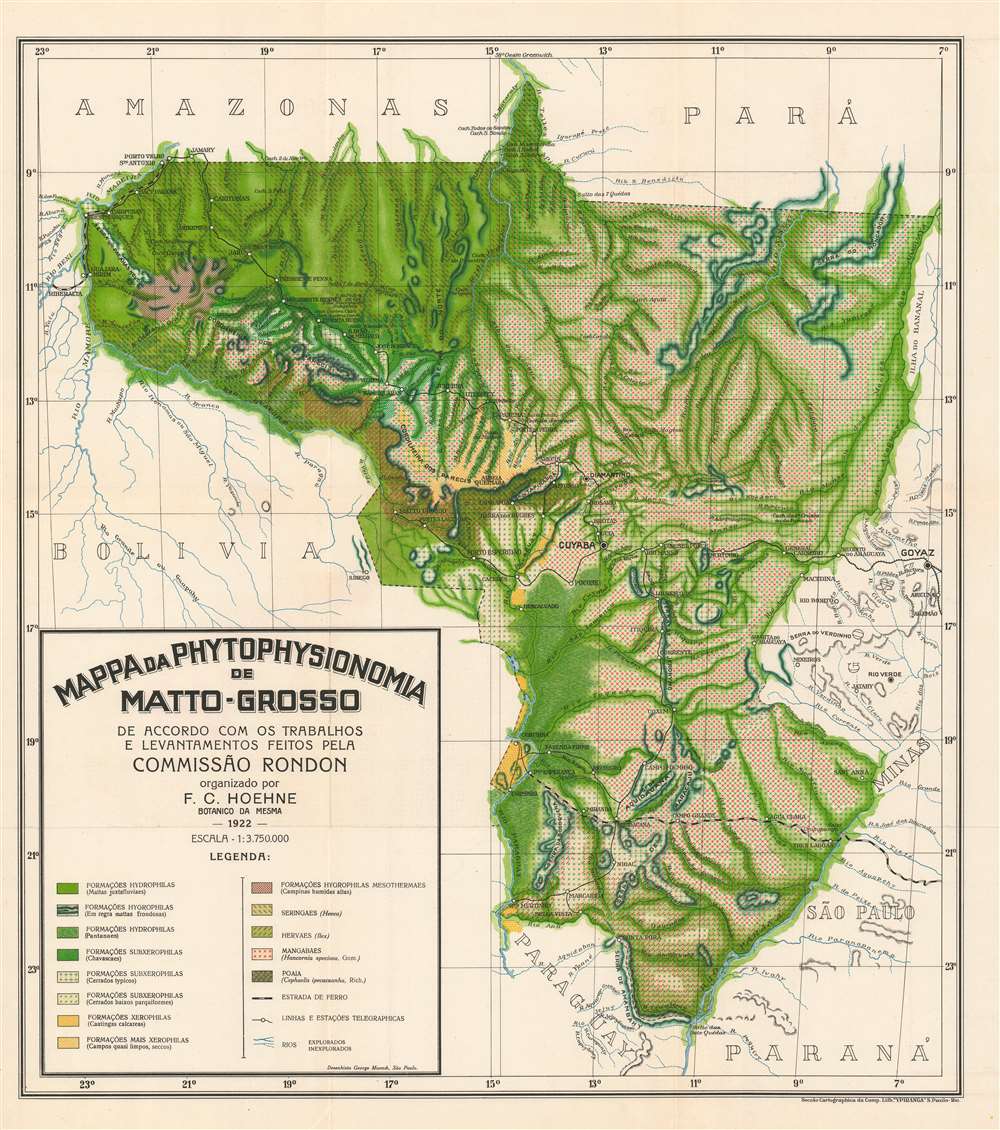 Highlights to vast array of vegetation present in the Mato Grosso, an incredibly biologically diverse part of the Brazilian rainforest.
$550.00

This is a 1922 Frederico Carlos Hoehne map of the Mato Grosso region of Brazil highlighting regional differences in vegetation. The Mato Grosso is one of the most remote and little understood regions of Brazil. It is the location where the famous explorer, Percy Fawcett believed he would discover El Dorado, or as he called it, Z, and where he ultimately vanished. Maps of the Mato Grosso are exceedingly scarce due to the remoteness of the region and density of the rain forest. On this map, Hoehne differentiates between thirteen different 'phytophysiognomies', which are labeled here as 'formations', some of which include 'typical savannahs', 'parquiform low savannahs', and 'high wet meadows', and uses different patterns and colors to identify each one. Phytophysiognomy refers to the specific character and attributes of a given type of plant based on its appearance. Many of the settlements identified here are actually telegraph stations, with the exception of Cuyaba (Cuiabá), the regional capital, Diamantino, Corumba, and others. The telegraph lines are illustrated by thin black lines between the telegraph stations, which are marked by white circles. The whole network illustrated here was put in place by 'The Rondon Commission', a military operation led by Cândido Rondon, a Brazilian military officer and explorer. The Madeira-Mamoré Railroad, situated in the upper left, and the North Western of Brazil Railway, situated in the bottom right quadrant and ending at Porto Esperança, are both illustrated. Perhaps the most intriguing notation present in the key, situated in the lower left corner, is the differentiation between explored rivers and unexplored rivers.

This map was created by Frederico Carlos Hoehne, drawn by George Muench, and printed by Ypiranga Lithography in 1922. This is the only known example.

Frederico Carlos Hoehne (February 1, 1882 - March 16, 1959) was a Brazilian ecologist, taxonomist, and botanist. Hoehne was born in Juiz de Fora and his parents ran an orchid hothouse and farm. He was homeschooled before attending the Colégio Americano, where he continued his education in botany under the guidance of João Barbosa Rodrigues and Emilio Jobet. He was named head gardener (jardiniere-chefe) at the National Museum in Rio de Janeiro in 1907. He soon became involved in the Rondon Commission and conducted surveys of plant life in the Mato Grosso and Amazonas regions. He also participated in the expeditions surrounding the establishment of the telegraph lines in 1910 and served as the botanist on the Roosevelt-Rondon expedition, which was in the field in 1913-1914. By 1917 he held a position at the Instituto de Botánica in São Paulo and was named director in 1942. Hoehne was a prolific author, contributing to the final reports of all the major expeditions of which he was a part, as well as writing numerous books and well over fifty articles. He founded the Botanical Garden of São Paulo, and was also director of the Butantan Institute and the São Paulo Zoo. He married Carla Augusta Frieda Kulhmann in 1907, with whom he had four children.