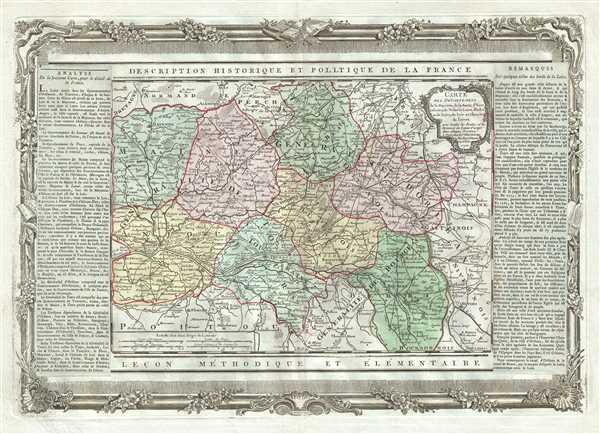 Vendee is home to a number of small vineyards around the communes of Vix, Brem, Pissotte and Mareuil-sur-Lay. These wines are marketed under the 'Fiefs Vendeens' designation. Production quality has improved markedly over recent years, and, having already achieved the classification Vin Delimite de Qualite Superieure (VDQS), the wines are on their way towards A.O.C status (Appellation d'Origine Controlee). The rural area of Deux-Sevres produces fine wines such as Vin du Thouarsais, of Thouarsas. The cheese Chabichou is also made here. Chabichou is a traditional soft, unpasteurized, natural-rind goat cheese (or Chevre) with a firm and creamy texture. Vienne is renowned for its production of Chevre, or goat cheese, and is a vital industry in this department.

A beautifully engraved title cartouche adorns the top right quadrant of the map. To the left and right of the map are paste downs of French text with remarks and description of the map. Surrounding the whole is an elaborate decorative border featuring floral arrangements. This map was issued as plate no. 14 in Desnos’ Atlas National de France, bound with the most deluxe edition of his 1786 Atlas General Methodique et Elementaire, Pour l’Etude de la Geographie et de l’Histoire Moderne.