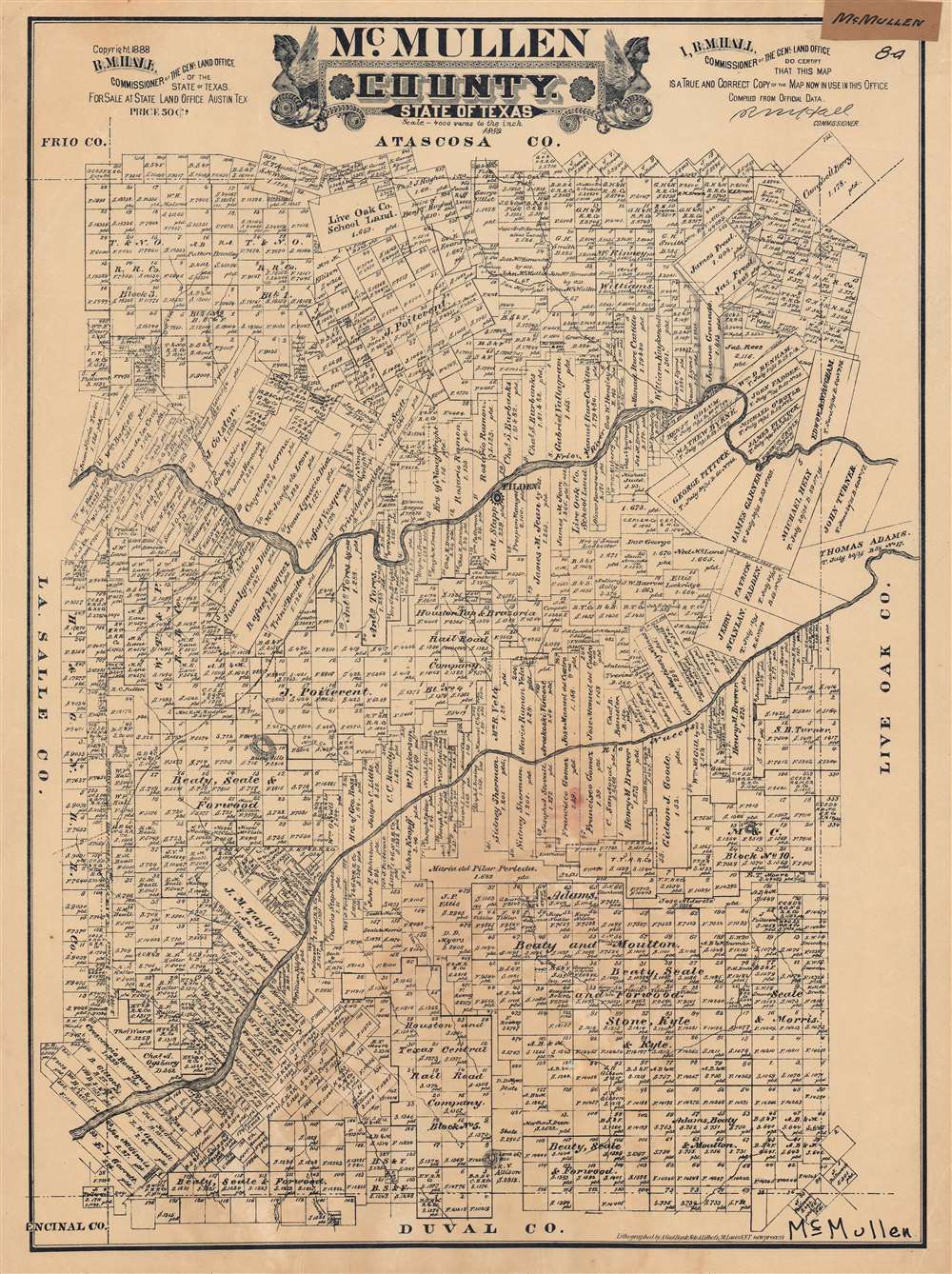 This is a very rare 1889 plat or cadastral map of McMullen County, Texas produced by Augustus Gast for the Texas General Land Office. It shows the demarcation of properties and their owners in the South Texas county, which was and remains primarily ranchland.

This map shows the division and ownership of property according to the latest survey of the Texas General Land Office. A scale of 4,000 varas to one inch is used, varas being a holdover from Texas' Mexican days. The measurement varied considerably throughout the Spanish Empire (even between California and Texas) but was standardized once Texas became a republic and required for land surveys and deeds.

The map includes some hand-drawn annotations towards top-right, around the properties of Juanna or Joanna Granado (evidently a female landowner) and James Freal, as well as a note related to a water pump on an adjoining property along the Frio River. The amount of property owned by railroad companies is notable. Some of these were short-lived; the Houston Tap and Brazoria Railway was already defunct by the time of this map's publication and had been absorbed by the Houston and Great Northern Railroad (itself merged with the International Railroad in 1873 to form the International and Great Northern Railroad Company). Though the railroad reached Loredo before this map was published, it did so by a route further to the west, leaving McMullin County with a standard coach road to Loredo, which traverses the map from top-center to left-center.

McMullen County was and remains cattle country, and today is one of the least populous counties in Texas, with a population of roughly 600, considerably less than the population (slightly over 1,000) when this map was published. In its early years as part of the Texas and American Republics, this area was known as a lawless bandit haunt whose residents generally met untimely deaths, prompting the Texas government to survey and encourage settlement on the land in the 1860s-1870s. The county was established in 1858 but was not organized until 1877, coinciding with the first edition of this map.

August Gast (c. 1892 - 1900) was a printer and publisher active in St. Louis and New York in the late 19th century. Gast, though stylizing himself as a "map publisher" was mostly focused on bank note and revenue stamp lithography. Gast's business took off in 1893 when the Revenue Act of March 3 1883 repealed the two cent tax on checks and drafts. Consequently check and other bank notes no longer required an affixed revenue stamps, however, the public, familiar with such, proved suspicious of any such document that did not bear a official stamp. Thus a flourishing publishing business emerged in which bank and other documents were printed with semi-official "tax" stamps. Gast was one of the most prominent such publishers active in both New York and the Midwest. Learn More...


The Texas General Land Office (GLO) (December 22, 1836 - Present) is an agency of the state government of Texas responsible for the management of land and mineral rights that are owned by the state. Established by the Congress of the Republic of Texas on December 22, 1836, the agency manages Texas's publicly owned land, negotiates and enforces leases concerning the use of that land, and sells public lands. Part of these proceeds are put into the state's Permanent School Fund, which helps fund public education in Texas. The GLO has managed The Alamo in San Antonio since 2011. After Texas was annexed by the United States in 1845, the state maintained control over all its public lands from when it had been a sovereign state, making Texas the only U.S. state to control all its own public lands. All federal land in Texas was acquired either through purchase (for example military bases) or donation (national parks). Learn More...

Very good. Some handwritten annotations. Some discoloration and a small hole near bottom-center (at Plot 125).