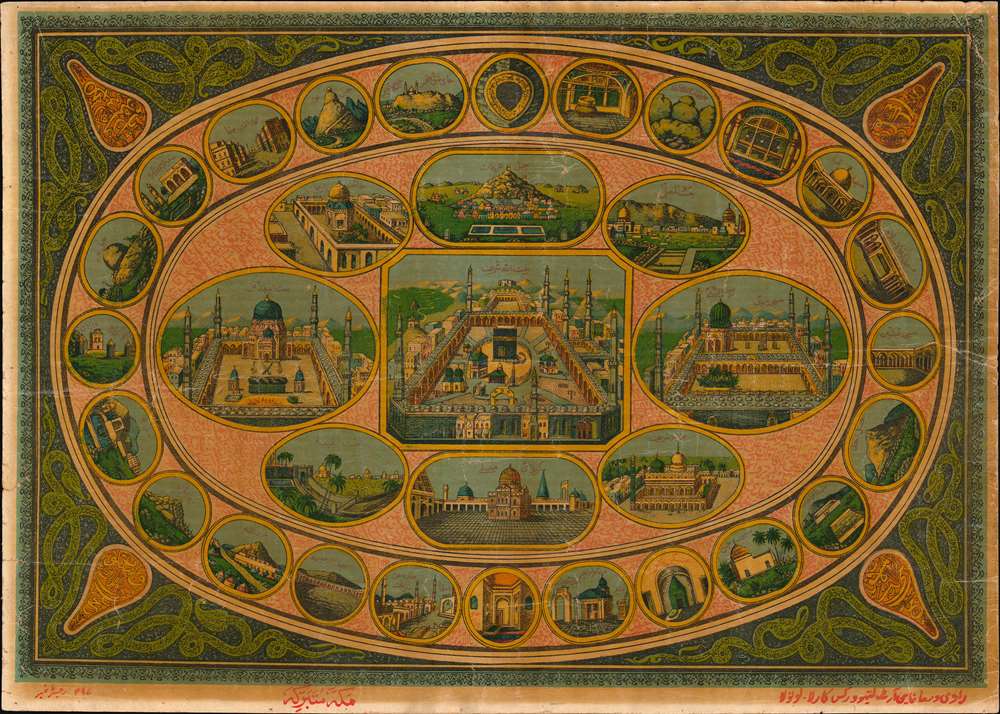 This is a rare c. 1900 Raja Ravi Varma chromolithograph view of the primary Islamic pilgrimage sites: Mecca, Medina, and Jerusalem, as well as 6 secondary sites, and 24 tertiary sites. The view was printed in Lonavala, India, by a Raja Ravi Varma Press, one the first Indian owned and operated presses on the Subcontinent.

Mecca and the Kaaba (ٱلْكَعْبَة‎ ) take front and center, surrounded by the Dome of the Rock (قبة الصخرة‎) in Jerusalem on the left and Medina (المدينة المنورة‎) on the right. Other major mosques and shrines appear above and below and integrated into the first border. The whole is surrounded by Islamic borderwork decorated with Arabic text. Each pilgrimage site is labeled in Arabic. It bears an Arabic date, 1289 Hijri, roughly 1872 - presumably the date of the original artwork, as the lithograph itself could not have been produced any earlier than 1899, when the Raja Ravi Varma press moved to Lonavala.

This view was printed in the Lonavala workshop of the Raja Ravi Varma Press, Maharashtra, India. It is extremely rare with no other examples known.

Good. Some edge wear and minor verso reinforcements along edge. Varnished over. Toning. Some creasing to paper.
Looking for a high-resolution scan of this?