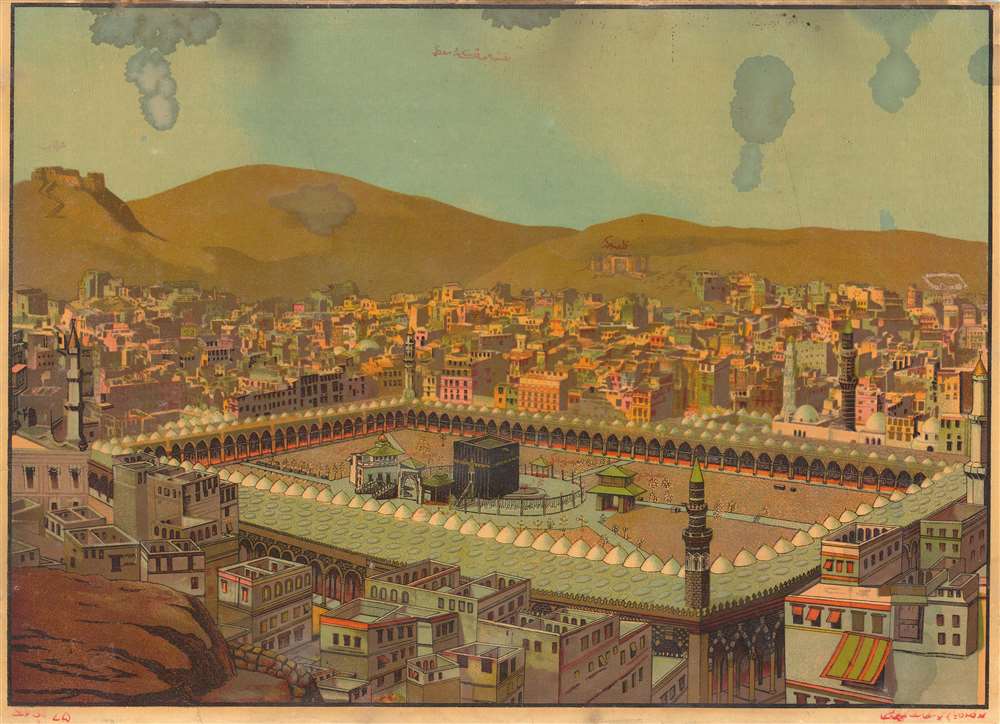 This is a rare c. 1900 Raja Ravi Varma chromolithograph view of the city of Mecca (مكة المكرمة), the Masjid al-Haram (اَلْمَسْجِدُ ٱلْحَرَامُ‎), and the Kaaba (ٱلْكَعْبَة‎ ), Saudi Arabia. Unlike most other Varma views of the 'The Holy Capital', this is a proper city view, which although focused on the Masjid al-Haram, embraces a significant part of the surrounding city and mountains. Centered on the Kaaba (ٱلْكَعْبَة‎ ), the view illustrates the Great Mosque during the Ottoman Period, when it had 7 minarets. The view was printed in Lonavala, India, by Raja Ravi Varma Press, one the first Indian owned and operated presses on the Subcontinent.

The Kaaba (ٱلْكَعْبَة‎ ) takes front and center, surrounded by arcades and supplementary buildings. All significant buildings, gates, and streets are labeled in Arabic. Some of the surrounding residential buildings are also noted - most of these have since been leveled for Saudi-era Mosque expansions. It bears an Arabic date, 1289 Hijri, roughly 1872 - presumably the date of the original artwork, as the lithograph itself could not have been produced any earlier than 1899, when the Raja Ravi Varma press moved to Lonavala.

This view was printed in the Lonavala workshop of the Raja Ravi Varma Press, Maharashtra, India. It is extremely rare with no other examples known.

Average. Some edge wear and minor verso reinforcements along edge. Varnished over. Toning. Dampstaining in sky above city.
Looking for a high-resolution scan of this?