1943 Minneapolis Morning Tribune Map of Europe and the Mediterranean 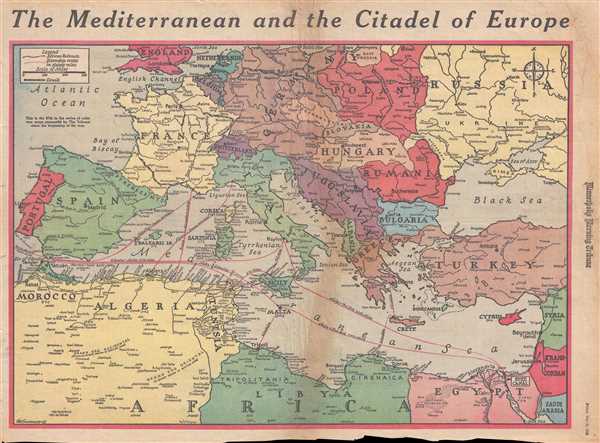 1943 Minneapolis Morning Tribune Map of Europe and the Mediterranean

Printed a week after the Allies secured the surrender of German and Italian forces in North Africa.
$200.00

This is a Friday, May 21, 1943 Van Swearingen and Minneapolis Morning Tribune map of Europe and the Mediterranean a week after the surrender of Italian and German forces in North Africa on May 13, 1943. The map depicts the region from England, the North Sea, and Germany to North Africa and from the Atlantic Ocean, Portugal, Spain, and Morocco to the Black Sea, Turkey, Syria and Transjordan. As this map was published eight days after the surrender of Axis forces in North Africa, it is presenting the current situation of the war against Nazi Germany and Fascist Italy to the Tribune's readers. Since combat in North Africa had ended, the world's focus was now turned toward where the Allies would invade 'the Citadel of Europe'. Here, Van Swearingen takes the approach that the Allies would utilize territory gained in North Africa to launch their assault on Europe and gives distances from many Allied occupied cities and islands to possible invasion sites across southern Europe. Although unknown at the time, the Allies chose Sicily as their next objective, and launched an amphibious and airborne invasion on July 10, 1943, seven weeks after this map was printed.

A well-made map, all the countries illustrated are labeled, along with myriad cities and towns throughout Europe, the Middle East, and North Africa. These include major cities, such as Rabat, Casablanca, Algiers, Tunis, Tripoli, and Tobruk in North Africa (all of which played a role in the North African campaign), Jerusalem, Tel Aviv, Haifa, and Beirut in the Middle East, and all of the major capitals of Europe. The line dividing Poland between Germany and Russia established by the Molotov-Ribbentrop Pact of 1939 is also illustrated, although the current battle line between the Germans and the Russian is not. Rail lines in North Africa are illustrated, along with canals in Europe.

This map was drawn by Van Swearingen and published as the 97th map in the series of color war maps published by the Minneapolis Tribune on Friday, May 21, 1943.