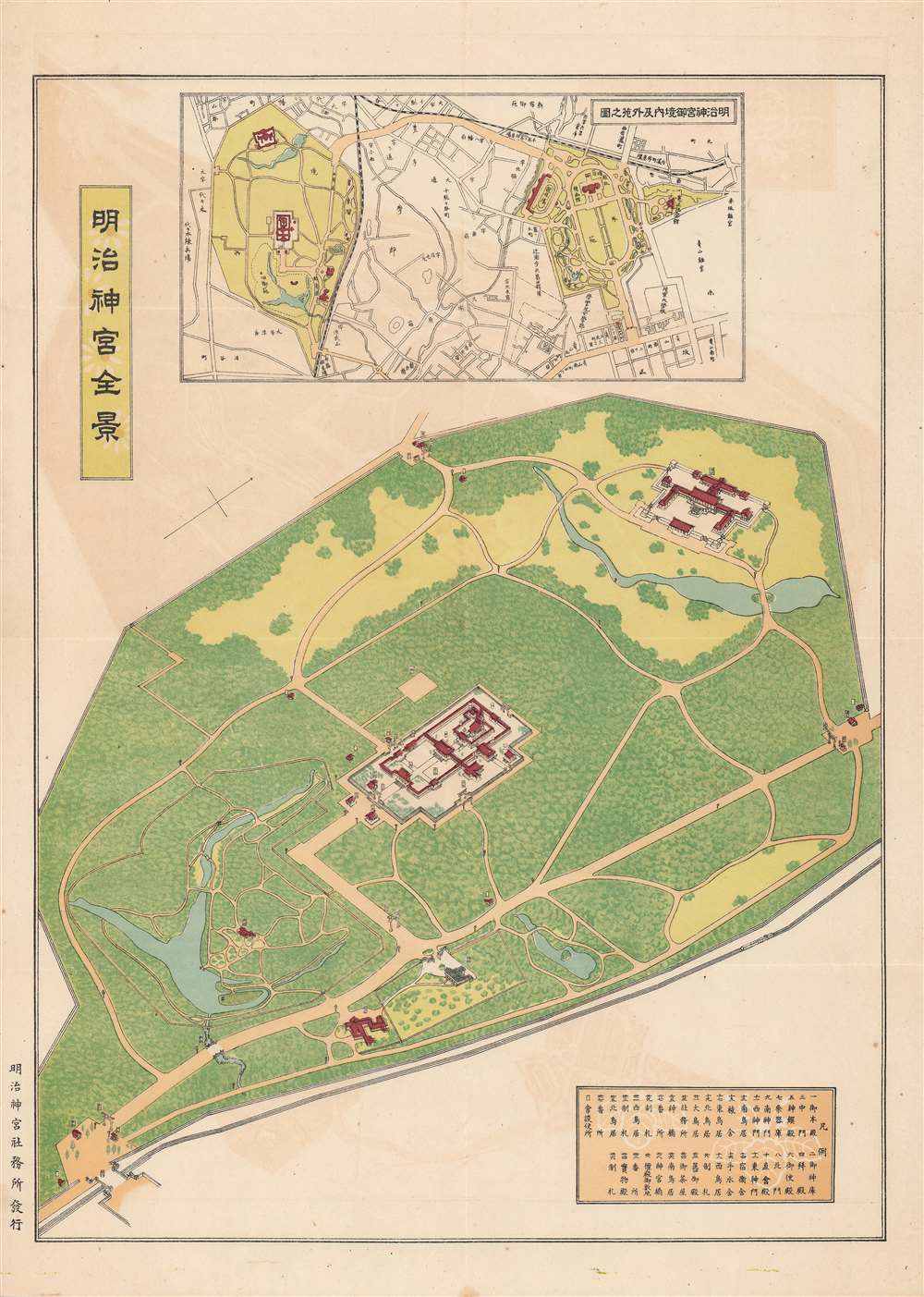 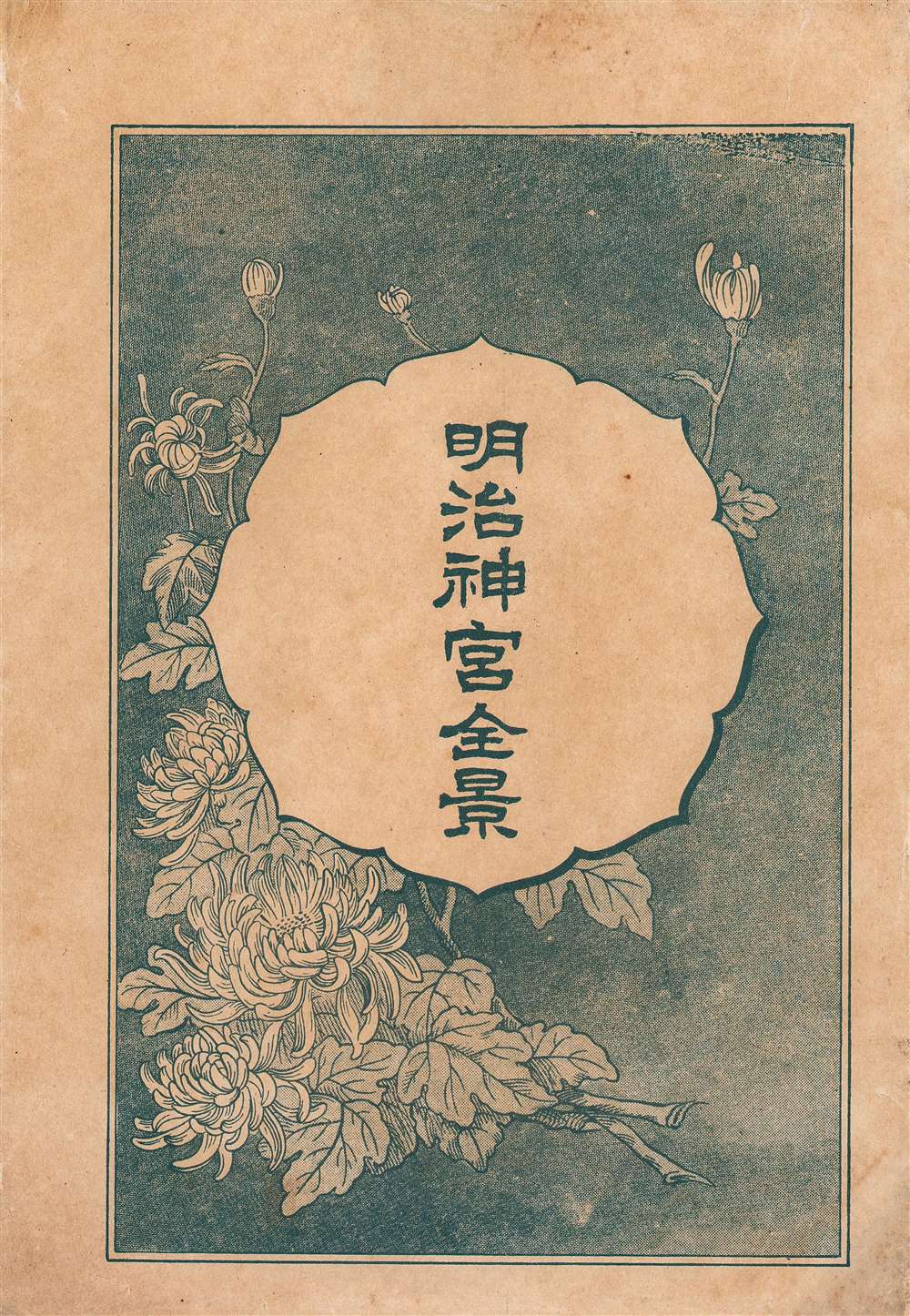 A monumental shrine befitting the first emperor of modern Japan.
$300.00

This is a c. 1930 bird's-eye panoramic view of the Meiji Shrine (Meiji Jingū) in Tokyo, published by the Meiji Jingū Shamusho, the office tasked with managing the shrine. The shine has played an important historical role in Japanese national identity, especially in the years between its completion and the end of World War II.

This view faces towards the northwest with Harajuku Station in the foreground at left (the rail line is illustrated but the station not indicated), the shrine itself at center, and the Treasure Hall containing many of the personal effects of the emperor at top-right. The legend at bottom provides numbers corresponding to various structures within the shrine complex. The inset at top contains an overhead map of the area, including the outer section (Gaien, 外苑) of the shrine and surrounding sites, such as Shinanomachi Station (信濃町停車場), the Army Academy (陸軍大學校), and the Gakushuin Women's College (學習院女學部).

The Meiji Jingū houses the deified spirits (kami) of the Meiji Emperor and his wife, Empress Shōken. The Meiji Emperor died in July 1912 as sovereign of a very different country than the one he ruled when he ascended to the throne in 1868. Japan had become a modern country during his reign, and immediately after his death efforts began to build a suitably magnificent shrine to the consequential monarch. Funding and materials for the shrine came from every corner of Japan and more than 100,000 young people were mobilized as laborers for the project, which became a matter of critical national importance.

The main inner section (Naien, 内苑) of the shrine complex opened to the public on November 1, 1920, to a crowd of some 500,000 worshippers. The outer section (Gaien) including the Meiji Memorial Picture Gallery (繪画舘), the Constitution Memorial Hall (憲法紀念館), and numerous sports facilities (to honor the youth who built the complex) was opened in October 1926, after a significant delay due to the Great Kanto Earthquake of 1923. The sports facilities were used for the 1930 Far Eastern Championship Games, a forerunner to today's Asian Games.

The Meiji Shrine is an appropriate memorial to the Meiji Emperor, since one of the first major tasks of the Meiji Restoration was the creation of the State Shinto system. This process centralized thousands of local shrines and religious practices, cut off their existing means of finance, put them under a single priesthood structure, and placed the imperial family at the center of worship, turning folk religious practice into a vehicle for building national identity and nationalism.

There was often local opposition to these measures, but they were forced through, nonetheless. In the following decades, many thousands of shrines closed or consolidated and those that survived increasingly became little more than boosters for Japanese imperialism. Major reforms during the American occupation severed the ties between Shinto and the state, but the shrines and folk religious practices eliminated in the Meiji era could not easily be revived, and some remnants of the imperial era survive, such as the commemoration of war dead (including war criminals) at Shinto shrines, in particular the controversial Yasukuni Shrine.

As for the Meiji Shrine, unsurprisingly it immediately became an important site in State Shinto, one of the Kanpei-taisha (官幣大社), the first rank of State Shinto shrines. It was destroyed by American bombs in World War II and rebuilt in the 1950s. An impressive new museum was opened not far from the train station in 2019 to commemorate the centenary of the construction of the Meiji Shrine.

The Meiji Shrine is located in Shibuya, then the edge of the city but now well within the built-up urban area of Tokyo. In its postwar iteration, the shrine has been a popular site for locals, tourists, and visiting foreign dignitaries. Perhaps fittingly, given the Meiji Emperor's role in modernizing Japan and the role of young people in building the shrine, the Harajuku neighborhood just across the rail tracks from the shrine is known internationally as a center for Japanese youth culture, including anime, cosplay, nightlife, and cutting-edge fashion.

This view was published by the Meiji Jingū Shamusho (明治神宮社務所), the office tasked with managing the Meiji Shrine. It is not dated and contains no publication information, though it likely was published soon after the outer complex (Gaien) was completed. This view is not known to exist in any institutional holdings and has no known history on the market.

Meiji Jingū Shamusho (明治神宮社務所; 1920 – present) is the office tasked with managing the Meiji Shrine (Meiji Jingū), dedicated to the spirits of the Meiji Emperor (r. 1867 – 1912) and Empress Shōken, in Tokyo. The publishing wing of the Shamusho has produced dozens of works relating to the shrine itself, Shinto, and the Meiji Emperor. Learn More...