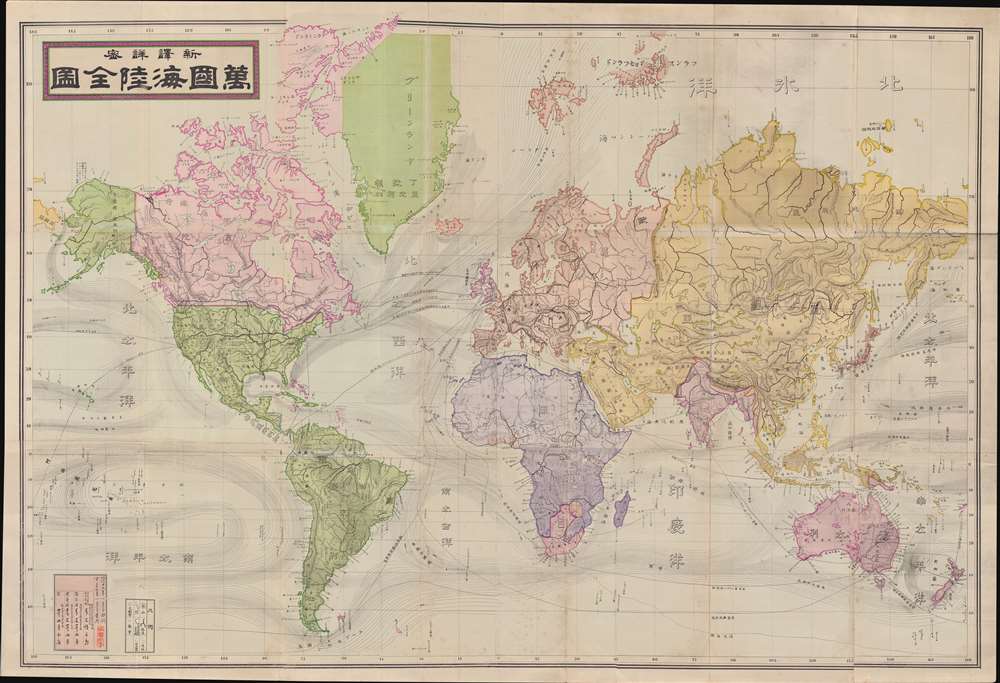 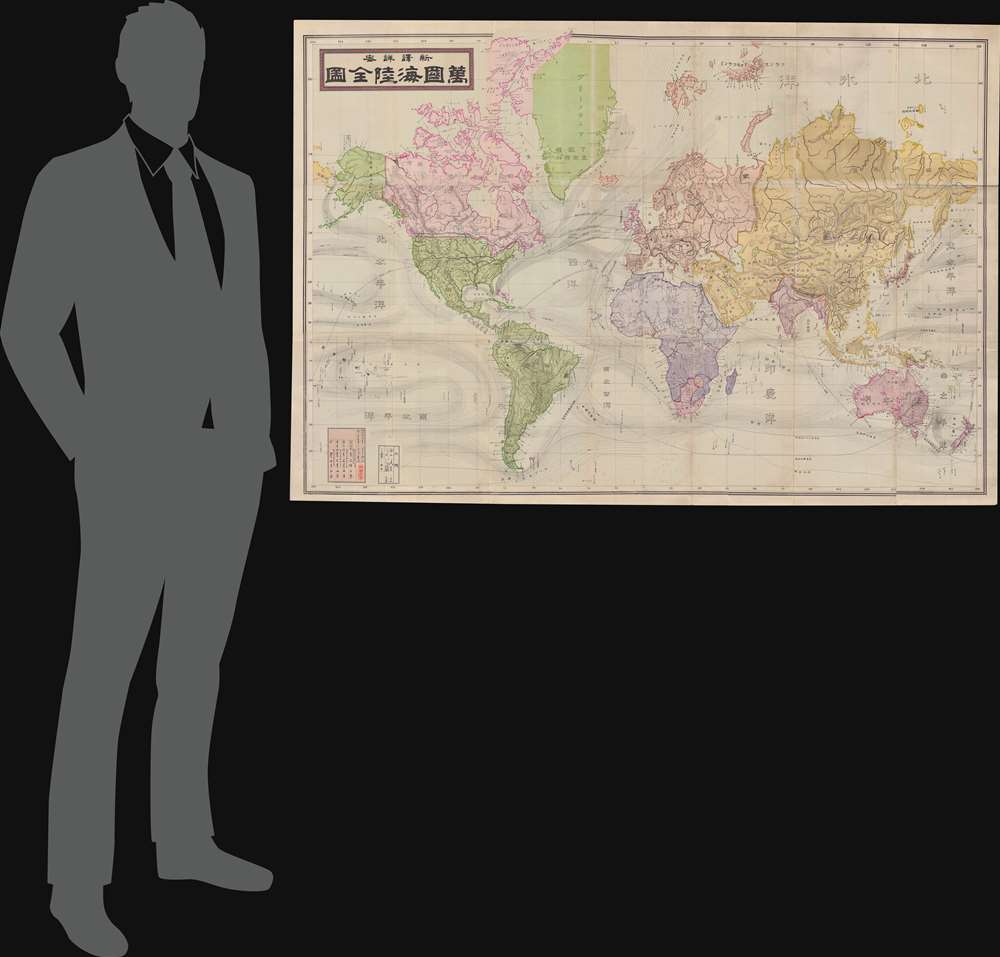 This is a very rare 1892 world map on a Mercator Projection by Aoki Tsunesaburō, one of the most prominent publishers of books and maps dealing with foreign knowledge during the Meiji period. The map reflects the increasing development and dissemination of open-ocean navigational knowledge and interest in the latest geographical discoveries in Meiji Era Japan.

The use of a Mercator Projection along with the conspicuous presentation of ocean currents and their directions suggest that this map was designed to highlight navigational as well as geographic knowledge. The meticulous documentation of small islands, such as South Georgia Island in the southern Atlantic Ocean, as well as new discoveries in the Arctic also suggests this interpretation.

A brief legend indicates capitals and major cities, mountains, roads, shipping lines, railways, and a special dotted line for the Siberian Railway, which had recently begun construction. Color-coding is used to distinguish continents, while territories of the British Empire are specially designated in pink, indicating that Aoki's source map was likely British in origin. A line beginning above Alaska and tracing over to Greenland shows an 1853 voyage led by one Captain Cleur or Couleur (ケプチンクルール氏); it is unclear what expedition this refers to but most likely it is a misdating of the McClure Expedition of 1850 which followed a similar route.

The Meiji Era in Japan

The Meiji Era was a period of tremendous change in Japan, as new ideas, technologies, and fashions from abroad were sought out and adopted with incredible rapidity. This was equally true in the publishing and mapmaking industries, as Western-style cartographic standards, lithographic printing, and imported inks, were combined with Ukiyo-e color traditions and aesthetic values. Aoki was one of the most successful publishers to emerge from this milieu, producing maps and books relating to foreign knowledge and technologies on a mass scale, selling them to a public hungry for such information in his own shops.

This map was printed by Aoki Tsunesaburō (青木恒三郎) and his firm Aoki Sūzandō (青木嵩山堂). It was printed on January 16, 1892 (Meiji 25) and published three days later, on January 19. This is the only known example of the 1892 edition of this map. An 1894 edition is held by the National Diet Library (NDL) and the University of California Berkeley, while the NDL also holds an 1896 edition, and the National Archives of Japan holds an edition not dated in its catalog. The map in any of its editions has no known history on the market. The map's title suggests that it is based on a foreign-language original, likely British, but the source map is not indicated or known.

Aoki Tsunesaburō (青木恒三郎; 1863-1926) was the founder of Aoki Sūzandō (青木嵩山堂), a major printer, publisher, and book retailer of the Meiji and Taisho era, with locations in Tokyo and Osaka. The firm produced a wide range of works aimed at general readers and was especially known for publishing translations of Western works, as well as maps and travelogues about the outside world, in high demand in the Meiji period. Aoki's publications were also known for their rich woodblock illustrations. One of the firm's most popular works was Aoki's account of his own travels throughout Japan, China, and the United States, accompanied by rich engravings and published as Illustrated Guide Book For Travelers Round the World (世界旅行万国名所図絵). As Aoki's business thrived, he became one of the founders and the first chairman of the Osaka Publishing Association (大阪出版組合). However, Aoki failed to keep up with changes in the publishing and distribution businesses and the company declined rapidly in the 1910s, eventually shutting down in 1918. Learn More...