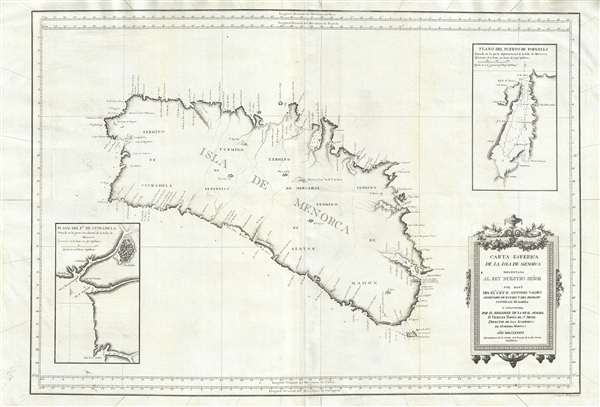 An extremely rare large scale 1786 Spanish nautical chart detailing the Balearic Island of Menorca (Minorca) by the famed hydrographers Vincente Tofiño de San Miguel and Antonio Valdés y Fernández Bazán. The map covers the island in full with light shoreline detail and soundings along the coasts. An inset map the lower left details the port city of Ciutadella de Menorca. The walled fortress city and streets are evident. Soundings continue up the river. A second inset appears in the upper right and details the northern port of Fornells. The map is beautifully engraved with villages represented by tiny finely etched illustrations. A rococo title cartouche appears in the lower right quadrant.

At the command of Valdés, Tofiño surveyed the Balearic Islands between 1783 and 1788. The results of their work appear to have been issued first independently then bound into various composite nautical atlases from about 1788. The present map was engraved by J. Joacqin Fabregat.