1791 Wilkinson Map of the World on the Mercator's Projection 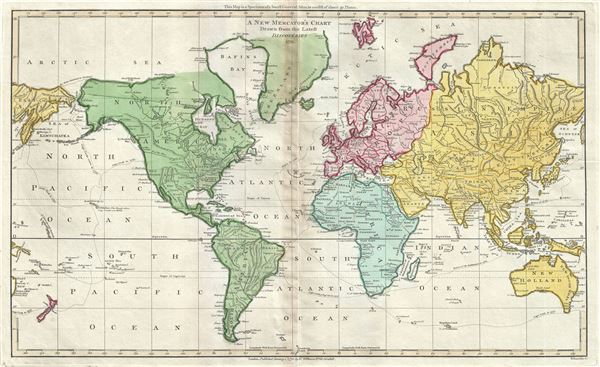 1791 Wilkinson Map of the World on the Mercator's Projection

This is a finely detailed 1791 map of the world on a Mercator projection by Robert Wilkinson. Wilkinson's map covers the entire world with color coding by continent. The exploratory routes taken by Captain Cook are noted. In Australia, here labeled New Holland, Van Diemen's Land or Tasmania, is attached to the continental mainland. The English colony of New South Wales and the settlements at Botany Bay and Port Jackson (Sydney) are identified. The disputed sea between Japan and Korea is here identified as the Gulf of Corea. As this map predates Vancouver's explorations, the Island of Vancouver is still attached to the North American mainland.

The speculative River of the West is noted. Appearing on maps of the middle to late 18th century, this river, which supposedly let out into the Strait of Juan de Fuca, was believed to be a potential river passage from the interior of North America to the Pacific. Today many believe the River of the West was simply a speculative mismapping of the Columbia River.