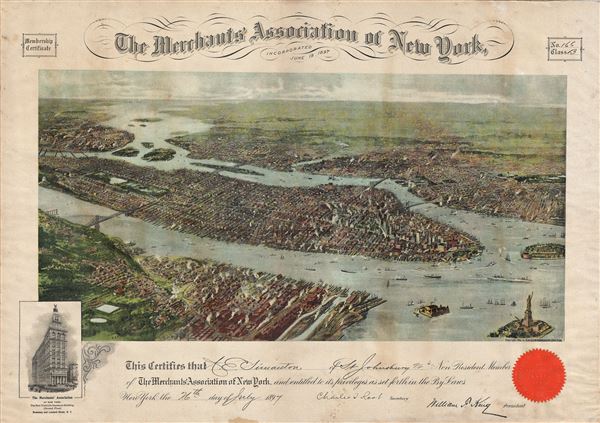 One of only two known examples of the original membership certificate for the Merchants' Association of New York.

An extraordinary unique find, this is an original 1897 membership certificate for the Merchants' Association of New York. The certificate was issued for one A. E. Sinauton (sp?), a class B non-resident member of the association, number 166. The Merchants' Association of New York was founded in 1897 to further and develop commerce in and around New York City. The association also engaged in political lobbying, charitable works, and encouraged ethical business practices among its members. The Merchant's Association had two classes of membership, Class A, issued to full time business active in New York City, and Class B, issued to non-resident businesses active outside of New York City. The certificate bears the signatures of Charles J. Root, the organization's secretary and William F. King, its first president. The associations red-orange corporate seal is set in the lower right quadrant.

The centerpiece of the certificate is a magnificent areal or birds-eye view of New York City by G. W. and C. B. Colton. Presented in chromolithograph color this view reveals Manhattan, Brooklyn, and Queens as seen from high above Jersey City and Hoboken, which themselves appear in the lower left quadrant. The area covered runs from the Bronx to the Statue of Liberty and from Hoboken to Brooklyn and Governor's Island.

The map is presented as if looking west from high above Hoboken and Jersey City – an unusual take on the city which deviates considerably from the more common south-north Manhattan views by earlier publishers such as Currier and Ives, and others. This might be explained by the development of Upper Manhattan, most notably the Upper West Side and Central Park, late in second half of the 19th century. The artist would have wanted to represent these newly affluent areas so that his view would appeal to the widest possible audience.

Several bridges are noted including the Brooklyn Bridge (completed in 1883), the Williamsburg Bridge (opened in 1903 but under construction as this view was being drawn), the Queensboro Bridge (proposed but, as this map was being drawn, as not as yet under construction), and a curious bridge that never materialized crossing the Hudson to Hoboken at 59th Street. Central Park is clearly visible, as are the Statue of Liberty in the lower right quadrant, St. John the Divine in the upper left, and Brooklyn's Prospect Park in the upper right. New York's signature grid system is clearly represented as are many individual buildings, many of which still stand today. The rivers, and harbor are teaming with life as countless ships of all shapes and sizes visit the many wharves on both size of the River. Smoke escapes many chimneys throughout, though especially in lower Manhattan and Jersey City, giving evidence to New York City's bustling late 19th century industry.

Original Merchant's Association of New York Certificates are extremely rare, the present offering being one (and vastly the superior) of only two known examples. The other is held in the collections of the Star of the Republic Museum in Washington-on-the-Brazos, Texas. While we can assume that these certificates were issued in volume, their extreme rarity is accounted for by the fact that the Merchants' Association aggressively recalled all of its original certificates in June of 1913 in exchange for a new, redesigned certificate. Most examples of the Merchants' Association's original founding certificates were thus destroyed.

It is noteworthy that Geographicus is also currently offering the only known example of the original Colton proof on which this reduced view is based. See Geographicus item: NewYorkCityView-colton-1897.