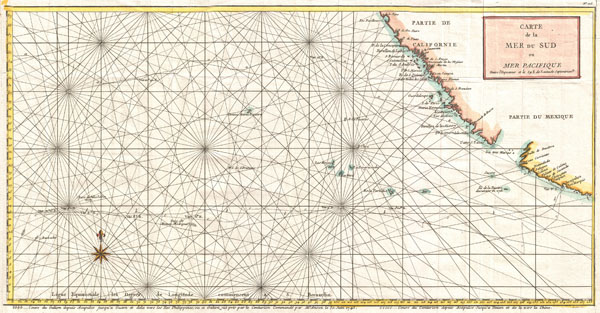 This is a rare 1750 nautical chart of the Pacific Ocean by the French map publisher N. Bellin. Based on a similar chart in English prepared two years earlier by Seale. Chart depicts the trade routes used by Spanish Galleons from Acapulco, Mexico heading towards Manila in the Philippines. In particular, this chart depicts the travels of the Spanish Nostra Seigniora de Cabadonga and the British Navy Commodore George Anson. Anson lead an ill-equipped expedition into the Pacific with the mission to attack Spanish dominions in South America. Though he failed in this mission, Anson did succeed in capturing the Spanish treasure galleon off Cape Espiritu Santo on June 20, 1743. The Spanish galleon was loaded with gold, silver and, more importantly, nautical charts depicting the trade routes used by Spanish Galleons between Mexico and Manila for the previous 200 years. This significant discovery allowed the British to disrupt Spain's trade in the Pacific and thus economically handicap the Spanish dominance of the New World. Following his capture of the Nostra its treasures were paraded through the streets of London in no less than 32 wagons. Anson was hailed as a national hero. Beautifully details the pacific islands and much of the Mexican and California coast. Names numerous important destinations along the California coast including Cabo San Lucas, San Diego, and Acapulco. Rhumb lines throughout. Drawn by Bellin and published as a supplement to the 1850 French edition of Anson's book A Voyage Round The World, In the Years MDCCXL, I, II, III, IV.


Richard William Seale (December 1703 - May 25, 1762) was an English a mapmaker and engraver active in London during the middle part of the 18th century. Seale was the son of Richard and Elizabeth Seale. Richard, his father, was a member of the Stationers Company, suggesting that printing and engraving must have been a family trade. Nonetheless, he did not learn the trade from his father, but rather from Samuel Parker of Clerkenwell, to whom he was apprenticed in 1719. Seale was extremely active as an engraver and publisher from about 1740 until his death in 1762. His cartographic corpus is vast; including pieces engraved for most other notable English cartographers of his period: Willdey, Baron, Toms, Rocque, Basire, Bowles, Benning, among others. In addition to cartographic work, Seale also produce numerous architectural engravings.