1753 Vaugondy Map of the Southern Guyenne Region of France 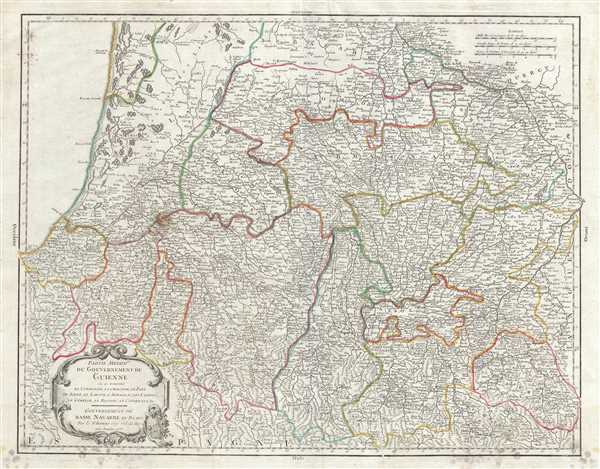 1753 Vaugondy Map of the Southern Guyenne Region of France

Covers the wine and cheese producing regions of Guyenne in southwest France.

This is a scarce 1753 map of the southern Guyenne region of France by Robert de Vaugondy. It covers the south western portions of France including the departments of Hautes-Pyrenees, Pyrenees-Atlantiques or Basses-Pyrenees, Landes, Gers and Haute-Garonne. The map extends from Pampelune, Spain east to Saint-Lizier and north as far as Mimizan. The map renders the entire region in extraordinary detail offering both topographical and political information with forests and mountains beautifully rendered in profile.

The region of Haute-Garonne produces the delicious but lesser known Buzet wines, and tender Rocamadour cheeses. Hautes Pyrenees is home to the wine producing region, Madiran. Madrian is best known for producing a powerful red wine made from the Tannat grape. This area also makes a number of cheeses, including Tomme Noire des Pyrenees and Roquefort cheese. The Basses-Pyrenees department includes the Jurancon wine region, famous for its production dry wines and sweet white wines. The famous Pilgrimage to Santiago de Compostella passes through this heavily Basque region ultimately crossing the Pyrenees into Spain at St. Jean Pied-de-Port. Landes is known for its production of Chalossais, a white cow cheese with a gentle, acidic edge. Tursan wine is also distilled here, along with Armagnac brandy. Gers is known especially for its production of Armagnac Brandy and Floc de Gascogne, a sweet wine. It is also home to Cotes de Gascogne, a wine-growing district in Gascony producing white wine. This area is also famous for its foie gras and wild mushrooms.

Rumsey 3353.044. Pedley, Mary Sponberg Belle et Utile: The Work of the Robert de Vaugondy Family of Mapmakers, 150, state 2.
Looking for a high-resolution scan of this?