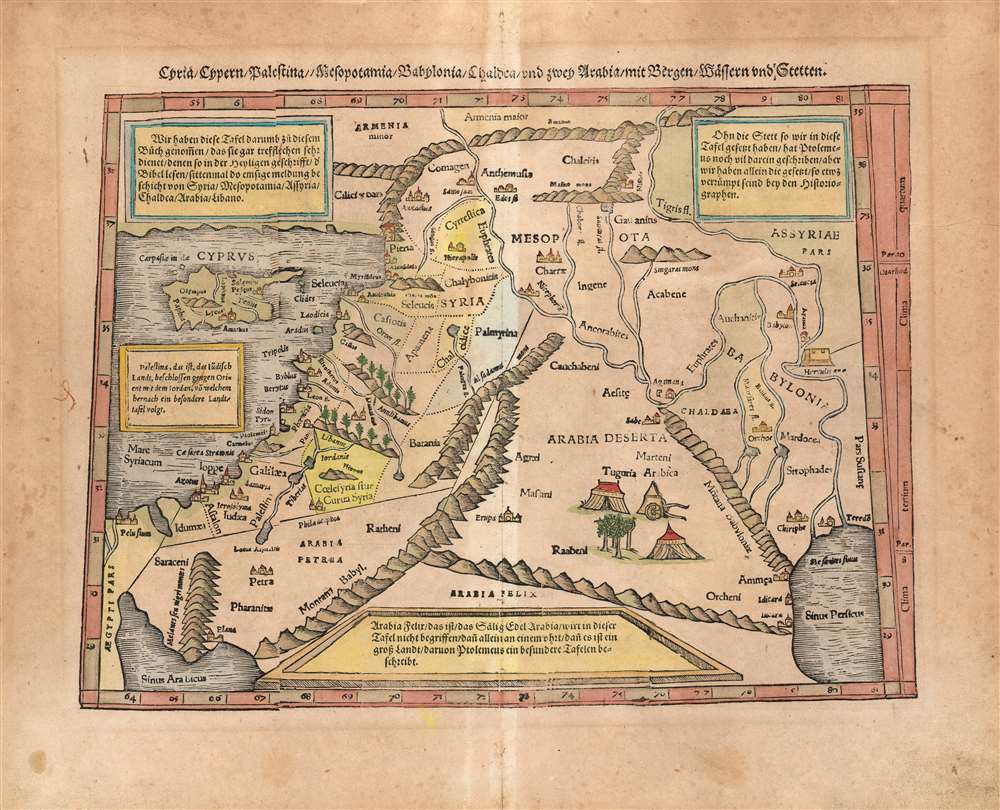 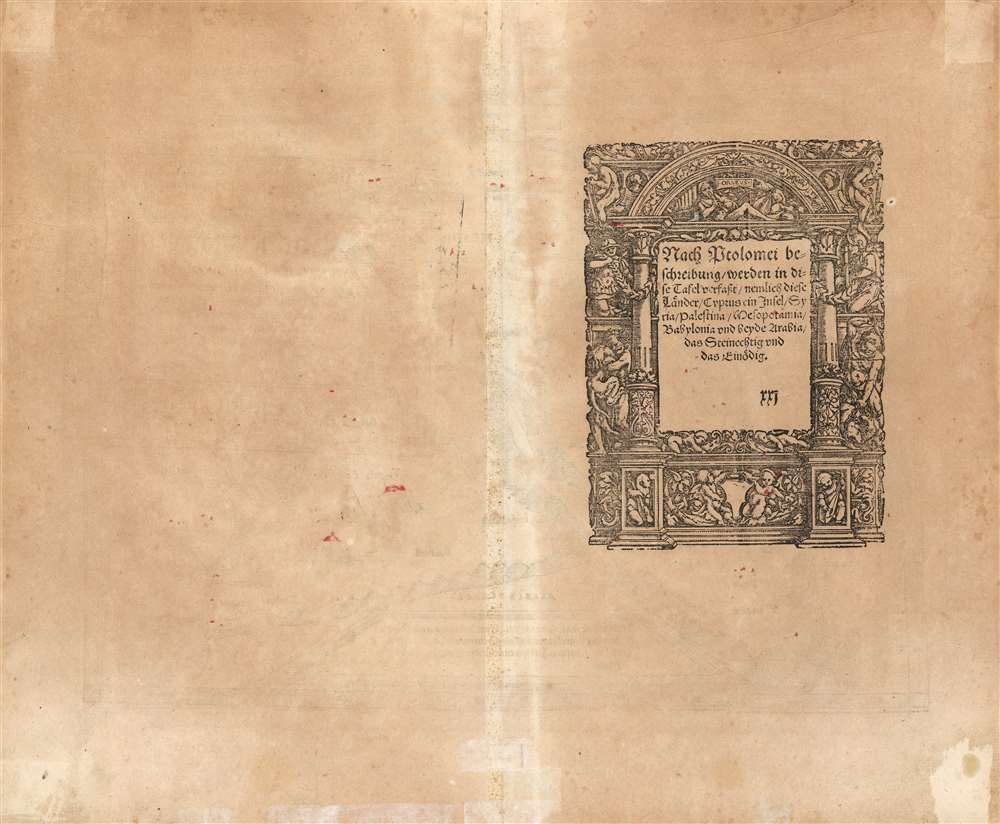 One of Münster's Scarcest Maps: The Holy Land and Fertile Crescent

This is Sebastian Münster's 1540 map of the Holy Land, Cyprus and the Fertile Crescent, from the 1578 German edition of Munster's Cosmographia Universalis. One of Münster's scarcest maps, it is one of his Ptolemaic works - derived from the Alexandrian geographer's second century geographic information, as passed along (probably) via Waldseemüller's 1513 Quarta Asiae Tabula. Being a smaller woodcut, Münster's work necessarily simplifies the 1513 map, but what it lacks in size the present work makes up for in its informative qualities: four typeset text boxes describe the contents of the map in detail (here in German: the text was re-set for the various editions.)

Following the Ptolemaic model, this simple conic projection map shows the region from the eastern Mediterranean Sea to the northern Persian Gulf. The area enclosed thus includes the island of Cyprus, all of the Holy Land, Syria, and the watershed of the Tigris and Euphrates Rivers - modern day Iraq and Kuwait. Also, the map includes the northern portions of Arabia: stony Arabia and Desert Arabia, as distinct from 'Happy Arabia' or 'Arabia Felix' which can be glimpsed to the south.

Like the Waldseemuller before it, Münster's map shows mountains pictorially. It goes further in depicting forests as well: the wooded mountains of Lebanon are shown, for instance. Also, in Arabia Deserta can be seen tents and wagons set about an oasis, indicating the nomadic peoples reputed to live there. On the shore of the Tigris River can be seen a 'Fortress of Hercules.' Cities, too, are shown pictorially: Babylon, Petra, Jaffa, Jerusalem, Sidon, Tyre, Beirut, Damascus, and many others are shown.

Sebastian Münster's maps were not, as a rule, colored when they left his publisher's house. The color on this map, however, shows distinct evidence of having been applied prior to binding (see the lack of age-toning along the centerfold of the map, indicating that it was tightly bound and not receiving the soot and/or light which has toned the rest of the page.) As was very often the case with these maps, we expect that the Cosmographeyfrom which this example was taken was rebound - perhaps as early as the 17th or 18th centuries - prior to which the maps received the color seen here, as well as the neat manuscript retouching to make the woodblock cracks less obtrusive.

Münster, Sebastian Cosmography oder Beschreibung aller Lände, (Basel: Petri) 1578.     The Cosmographia Universalis, one of the greatest geographical and historical works of the 16th century, 'taught nearly three generations of laymen most of what they knew about the world beyond their native places' (Strauss). Filled with maps, views, and rich descriptions of places throughout Europe and beyond, it was the best general source of geographical information until the advent of Ortelius' Theatrum. It was first issued by Sebastian Munster (1488 - 1552) in its 1544 German edition, and stayed in print long after its author's death in thirty five editions, and in five languages. (Of these, the 1550 and 1552 editions are widely regarded as the most complete and truest to the author's intentions: thereafter, later editors continued to add to the work's text; editions from 1588 onwards employed an entirely different set of maps produced on Ortelius' model.) Munster's goal, initially, was to rally his homeland's humanists and scholars to produce a new map of Germany in order to 'see what kind of a land our ancestors conquered for their home... bring honor to our country and place its beauties in the clear light of day.' Munster's project quickly expanded to cover the known world in its scope to produce a 'sufficiently large volume, in which I touch upon the foundation of all nations and kingdoms, their peculiarities, rivers, mountains, customs of men, royal successions, origins of the more important cities, succinct histories, religions, characteristics and fertility of lands... in Germany, however, I tarry a little longer.'.