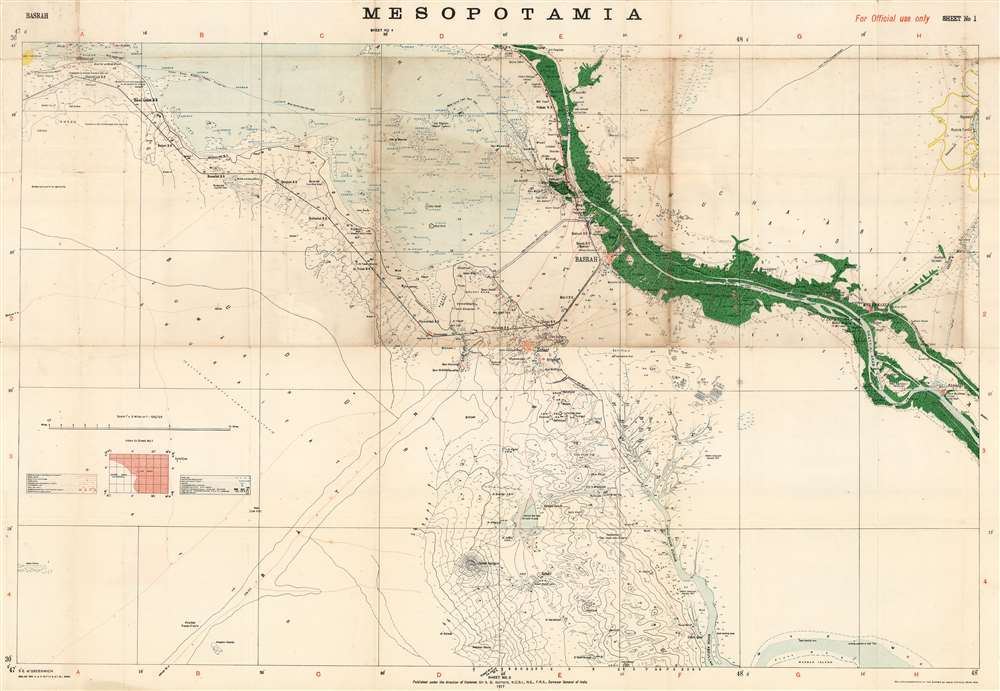 The Indian Army's Showcase Campaign in the Great War.

This is a rare 1917 Survey of India map focusing on the key strategic regions of Basra-Zubair in south-eastern Iraq and the adjacent Khorramshahr area of Persia, one of the first maps to show Abadan - the first oil boomtown of the Middle East. It was also a showcase theater for the employment of units of the Indian Army, whose officers were given charge of the campaign at the beginning of the war.

From the onset of the war, the theatre described in this map was of the highest interest to the British. The oil fields of Abadan, contracted via the Anglo-Persia Oil Company, was a major supplier of oil for the British navy; consequently the British were prompt to send a military force to protect Abadan in 1914. The reinforced 6th Division of the British Indian Army was assigned to land in the Shatt-al-Arab river, whose course bisects the map.

The map was produced in India for the use of the Indian Army during the British Mesopotamian Campaign. It is the most detailed wartime map of the Basra area, this being the location of the Indian and British Headquarters in Iraq during the campaign. The Indian Army contributed a majority of the allied forces for the campaign in Mesopotamia against the Ottoman Empire, a decision made in London to enhance British prestige in the eyes of India's Muslim population.

The map includes many improvements to the infrastructure of the region, such as pipelines, railways, telegraph lines, and raised embankments to contain the waters of the wetlands to the northwest of the city. The swamps and deserts which surrounded the area posed a challenge for the movement of troops and supplies through the theater, as study of the map makes apparent.

The map was printed in Dehradun, in northern India, having been commissioned by the General Staff of the Indian Army for the use of senior officers. Dehradun remains the location of The Office of Surveyor General of India today. The map was reproduced by heliozincography, a photographic process which enabled the accurate reproduction of images, manuscript text and outline engravings, which saw frequent use in the Ordnance Survey of Great Britain during the 1850s.

While there are oil wells marked throughout the map, there is a particular accumulation of wells and refineries in and around Abadan, which was the Middle East’s first ‘oil boomtown’. It appears here along with the Anglo-Persia Oil Company Refinery. Rich oil fields had been discovered here in the early 20th century, and in 1909, secret negotiations with the British would result in the formation of the Anglo-Persian Oil Company who completed their refinery in here in 1912.

We see no separate examples of this map on the market or in institutional collections. The complete fourteen map set is catalogued only at the University of Oxford, Harvard and the Library of Congress.

Good condition. Some patched wear at junctures of folds, with slight loss. Areas of increased toning at central panels.