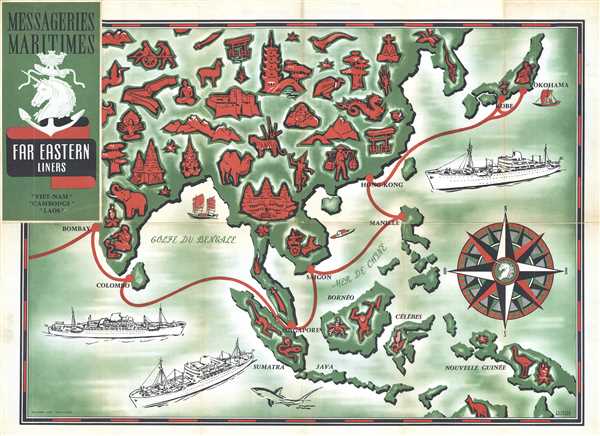 Incredible advertisement for post-war travel from France to the Far East.
$350.00

This is a 1954 Jacques Branger pictorial map advertising Messageries Maritimes' route through East Asia. The map depicts Asia from India to Japan and New Guinea and from Mongolia and Korea to extreme northern Australia. This map highlights the three newly-christened ships which serve the Indo-Chinese and Far East market, the Cambodge (French for Cambodia), the Laos, and the Viet-Nam. The month long voyages began at Marseille, and then called at Port Said and Aden (which are not on the map), then at Bombay, Colombo, Singapore, Saigon, Hong Kong, Kobe (only on the eastbound voyage), and Yokohama. Numerous vignettes decorate the map, including Angkor Wat, a woman in traditional Thai dress, a Chinese dragon, an elephant and a snake charmer in India, and a kangaroo in Australia. Depictions of the Cambodge, Laos, and Viet-Nam are also present.

This map was designed by Jacques Branger and published by Messageries Maritimes in 1954.


Messageries Maritimes (1852 - 1977) was a French merchant shipping company that was originally created under the name Compagnie des Services Maritimes des Messageries Nationales. In 1853, following the proclamation of the Second Empire by Louis-Napoléon Bonaparte, better-known as Napoleon III, the company’s name changed to Compagnie des Services Maritimes Imperiales and expanded dramatically. After the Franco-Prussian War, and the foundation of the Third Republic, the company again changed its name, this time to the Compagnie des Messageries Maritimes, abbreviated as MM. From 1871 to 1914, the company was in its golden age. Their ships were easily recognizable all over the world by their distinctive silhouette and white paint. World War II decimated the company’s fleet which had been split between the Allies and Vichy France. By the end of the war, only 21 ships remained. After the war, the company commissioned nine combination passenger and cargo ocean liners. Three of these would be devoted to the Indochina-Far East line, the Cambodge, Laos, and Viet-Nam. Each of these liners had First, Tourist, and Third Class accommodations. In 1977, CGT merged and Messagers Maritimes merged, to become Compagnie Générale Maritime.